My whole life I've been fascinated by the concept of "What if?"

I rarely sleep in on Sundays. I'm up early, packing in a workout, hustling to complete chores around the house and stocking up on carrots and grapes at the grocery, all before ten-thirty in the morning. Yesterday, I found myself not wanting to do any of it. No trekking to the Bally's in Hollywood. No fighting for a parking spot at the Trader Joe's on Silverlake Blvd. No loading laundry into the washer. Nope. Nothing. Nada. Rien.

I suppose my lack of motivation was in part due to the fact that I've been sick for most of the past week with the cold/flu that will not die. I hadn't slept well Saturday night, despite popping those friendly little Nyquil pills and some Tylenol. At seven in the morning, I looked in the bathroom mirror and said to myself, "You look like crap." No one in my family was up to either reassure me that I actually looked fine, or to concur with my observations. I seriously considered going back to bed...

Instead, I decided to go for a long overdue walk.

My weekend walks around the neighborhood began last spring in an effort to have some quiet time by myself. I'd stroll wherever my feet took me, trying not to worry about where I was walking, how long I'd been walking or how far I'd traveled. Sometimes I'd end up a couple miles from home, walking through parts of this city I'd previously only experienced by car.

Something changes when you get out of the car, when you're down on the street, analyzing the odd architectural quirks of this city, admiring the skyline through the early morning haze, inhaling the perfume of a thousand flowers and running into other people who are also up with the dawn.

This heavily accented question was not what I was expecting to hear as a reply to my chipper, "Good morning!"

The question was so strange, so oddly perplexing, I simply couldn't stroll by the sari-clad woman standing on the sidewalk. I mean, who asks someone who's walking by if they have salt?

I repeat again that I have salt at home but none on me. I explain that I live about a mile away or else I'd go get her some. I can tell she doesn't understand all of my rapidly spoken English. After about ten minutes of repeating ourselves and laughing at our misunderstandings, I gather that she is from Bombay and is here visiting her niece. She wants to cook breakfast, but the niece doesn't usually cook and so doesn't have any salt. In the midst of our conversation, I hear stirring from the apartment next to hers.

"Maybe one of the neighbors has some salt." 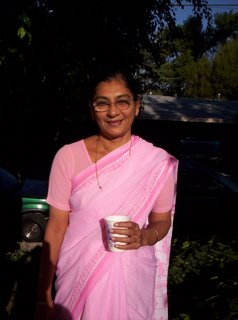 "So if you have some salt, that'd be great so she can cook breakfast instead of eating pop-tarts." I'm realizing that I've probably over-contextualized this in the hopes that she doesn't think we're some sort of crazy serial killers trying to get her to open the door.

Next thing you know, we've got salt in a styrofoam cup and my new auntie from Bombay is hugging me in gratitude. I snapped her photo to remember her by.

Which brings me back to my question. What if I'd slept in? Would she have gotten her salt? What made me decide to go for a walk and then walk up a street I almost never walk on? Were we meant to meet just so I could get her the salt?

I reminds me of the one poem I know by heart, "The Road Not Taken" by Robert Frost. What would happen if I'd taken the other path?

At the end of it all, will I know for sure whether or not I took the right path?
Email Post
Labels: Choices Colds Insomnia Errands Strangers Walking