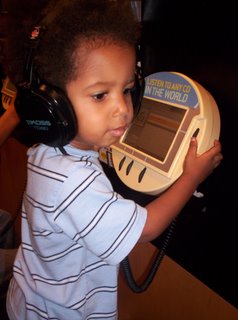 Much more. He takes a marked interest in music. It makes me wonder if he's going to be a musical genius.

This is Toussaint at a Barnes and Noble listening station last night. He even knows how to scroll through the songs on a cd and pick the ones he wants to hear. He prefers Billy Idol and AFI.

In this picture, he's listening to AFI. Zoom down a bit to my post entitled, "My Children Like AFI...And Other Reasons Why I'll Burn In Hell" and you'll understand the deal.