My Children Like AFI...And Other Reasons Why I'll Burn In Hell

My two sons like to play at being rock stars. It's fun watching a five year-old and a two year-old play air guitar and twirl in the floor like David Lee Roth. I twirl and dance right along with them. Without a doubt, the three of us have had our countless Depeche Mode moments. We've also washed dishes while having Franz Ferdinand sing alongs. In fact, that group was their favorite until this past spring. This past spring, they became punk-rock aficionados. You see, AFI (A Fire Inside) came into their world. 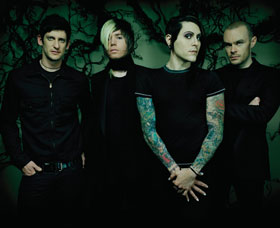 Looking at the picture of the group, you probably think I'm a horrid parent...and maybe my soul will burn for all eternity because of this. But really, there are no bitches and hos in the music. No one drops the f-bomb. They do look a little weird, but it's just good, angst-driven guitars and slightly depressing lyrics.

I suppose I should explain. It all began when I started watching videos in the mornings last spring while getting dressed for work. MTV started playing AFI's highly stylistic video to their song, "Miss Murder". It was definitely a great video so it started getting played more frequently. Olinga would sometimes ask who the group was.

Simultaneously, the song was suddenly all over the radio. It seemed like it was always getting played on KROQ at around 6:00 at night, right when I was driving home with the kids. (Yes, I frequently listen to KROQ because rarely do I hear someone calling me the aforementioned bitch or ho.) So on comes "Miss Murder" and we all start singing along. They didn't know the lyrics all the way though and so they would sing along by saying this, "Ay Miss Mi Al Cam Bye"

One afternoon, the boys were playing a game. I asked Olinga what game it was and he says, "We're playing AFI." He then got down in the floor and did a punk-rock scream just like the group's lead vocalist, Davey Havok. A couple of days later, he drew tattoos on his arms with a sharpie. --we had to have a little chat about that one. As for Toussaint, he isn't a big singer. He likes to be a guitarist so he is always busy "playing guitar" with a spatula.

Next thing you know, we're in the CD section of Barnes and Noble. Toussaint somehow got his hands on an AFI CD from the store display and started to harass me about listening to it. I let him listen to the snippets of music available for previewing and then I took a listen. It was pretty good. It really has to be the most watered-down punk rock ever. It's more pop-punk than anything. In fact, there were four songs on there that I really liked and my rule is that I have to love three songs if I'm going to buy a CD. So I bought it.

When we got home, Toussaint tried to take the shrink wrap off with his teeth. Once I put the CD on, they danced around to the entire thing, Olinga did vocals and Toussaint did guitar.

Two weeks later, they are more into AFI than ever.
Email Post