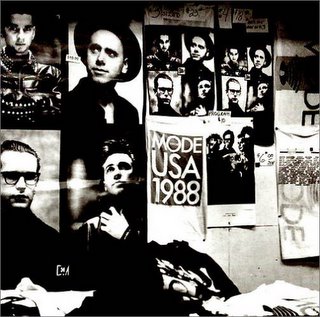 I’ve been a fan of Depeche Mode since I heard "Just Can't Get Enough"on a college radio station when I was nine or ten years old. Even though I only heard the song two or three times in the space of a month, I never forgot the name of the group. My mom had a pretty tight rein on my music collection and didn't care if I liked DM or not. There would be no "Black Celebration" 45's in our house! My hopes of screaming my heart out for Dave Gahan, Martin Gore, Andrew Fletcher and Alan Wilder were mere pipe dreams. And oh, I can't even begin to say how I longed for one of these posters from the 101 tour with Martin looking at something. Or someone. I wished so often, as I'm sure many men and women did, that he was looking at me.
Whatever snippets of DM news or music I could get a hold of married me to the alt rock authorities on Pain. Sadness. Suffering. Love. Sex. Faith. Truth. Time. Desperation. Submission. Comfort. Secrets. Night. God. Forever. A week in Michigan during the summer before my junior year of high school found me listening to an acquaintance's copy of "Music For The Masses. " I had never before been moved to tears by a song but the beautiful pain of The Things You Said hurt my heart so intensely, echoing the rejection I felt as I realized my secret crush didn't even know I existed:

My adoration for all lyrics and music produced by Martin Gore and sung by Dave Gahan probably cemented my high school status as the weird mixed girl who's mom wouldn't ever let her out of the house. But at 17 I went to college, five months after the release of "Violater". It was the first CD I ever bought. Walking along the hallowed sidewalks of Northwestern University, approaching Willard Hall, I heard the melody of "Personal Jesus" blaring out a dorm window. I knew I really was home.

My first DM concert was Saturday, June 11, 1994 at World Music Theatre in Tinley Park, a suburb of Chicago. It was a real treat, one week before my graduation and two weeks before I left to go live in China for a year. I took the guy who'd been my off and on boyfriend for a couple of years, mostly because I wanted someone who'd have fun and wouldn't complain or criticize. It was an outdoor arena and of course, a Tornado had touched down a few miles away and it was a torrential downpour. The show started really late and at times, the band had to stop playing because the wind was blowing water up on the stage. I didn't care. I wasn't leaving.

When I first joined TFA, folks would tell me that teaching was going to be the most amazing experience of my life. That used to annoy me because, at the time, going to China was number one and that Depeche Mode concert was number two. It's still in my top 10 and has been joined by three other DM concerts, marrying Elarryo, having two kids and seeing Prince last year.

Tonight was the first night of the long-anticipated Los Angeles stop for the "Playing the Angel" tour. Hearing that the concert sold out in 20 minutes made me so happy to be there with such great seats, and I danced and screamed for two hours straight. Clearly, I have loved every DM cd and find the new album refreshing and pure. They led with "A Pain That I'm Used To" and right off the bat, Dave Gahan came strutting on stage, sounding better than ever and looking fantastic. I wonder how Dave stays in such great shape? He had on a black shirt, a grey blazer which lasted for only the first song and some amazing black pants. Martin was wearing a black angel costume, complete with a black headress of feathers. He was in full makeup and had little sparkly dots lining his eyes. I absolutely love it when he does that weird crap. By the time they were rocking out "A Question Of Time" the headdress was off and so was Dave's shirt and jacket. Fletch just wore all black and stood behind his synthesizer looking cool.

I cried seven times and never sat down once. I still am waiting to hear "Master And Servant" live and last night did not grant my wish.They were amazing though. I still love hearing the old favorites like "Never Let Me Down" and "Enjoy the Silence" and the newly minted cuts blended right in with them. I will never forget their rendition of "Suffer Well":

"From the blackest room I was torn.
You called my name my love was born.
So I believe. Just hang on. Suffer well.
Sometimes it's hard. It's hard to tell"
Email Post

Anonymous said…
As always, thanks for sharing. Thanks to you, my Thanksgiving will be spent, in part, tearing into my sister's cassettes and listening to DM. I could never understand who it was she was rocking out to as the younger sib who took a bit to catch up. I totally get you guys and them now.
Glad I get to feel like I am keeping in touch by reading here. I'll need to open this up to a two lane conversation and write with news from NYC soon.
Happy Thanksgiving.
xo
2:40 PM, November 22, 2005