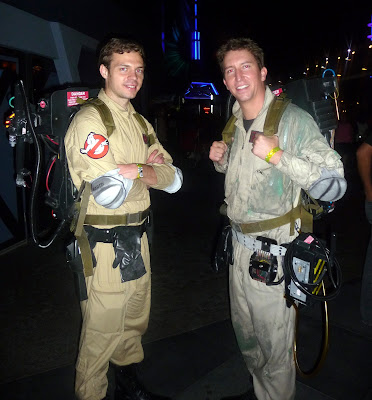 Do you ever wake up in the morning and say to yourself, "I think I'll put on my Ghostbusters costume and head over to Disneyland so I can ride Space Mountain and go trick-or-treating,"? If you haven't, what are you waiting for? If you wear that costume anywhere else--OK, anywhere else but Hollywood Boulevard or Comic-Con--the people around you will start feeling nervous and call the cops.

Avoid getting arrested and go to Mickey's Halloween Party, a special ticketed event on certain Mondays, Tuesdays, and Fridays in October--and, of course on Halloween night--instead. You'll have more fun there than at the police station, and you'll have an excuse to eat all the candy you normally don't eat because you want your pants to fit.

Disneyland invited my family down for the party's opening night last Friday night. I'd been sick with the flu all week but my sons would've probably tried to burn me at the stake if I'd been all, "Sorry, we can't go."

Despite my fatigue, the trip was totally worth it. The whole park gets tricked out with hundreds of carved pumpkins, Mickey pulls out his non-sparkly vampire costume, and several of the rides get a spooky makeover. We hit up Space Mountain first--it's turned into the "Ghost Galaxy" and has a scary monster chasing the rollercoaster. Just be aware that you will probably have one of two reactions to riding Ghost Galaxy: stunned shock and awe...or tongue out and making weird hand motions. 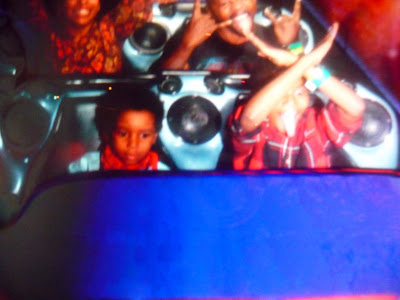 If your kid is over 3-years-old, have them get a makeover at the Pirates League in New Orleans Square. Eleven-year-old Mr. O got transformed into a pretty fierce pirate. With that beard my baby's looking really grown, isn't he? 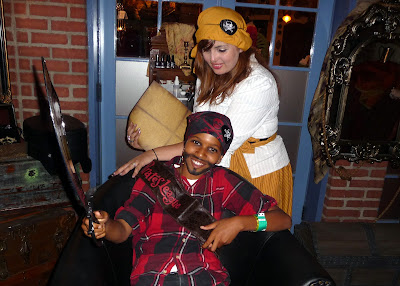 Eight year-old Mr. T passed on the pirate makeover and stuck with the cowboy outfit he's been dying to wear. I was supposed to be a pirate fortune teller but I forgot my eyepatch and scarf at home. I'm feeling pretty well protected by Pirate Blue Steel and Cowboy T. 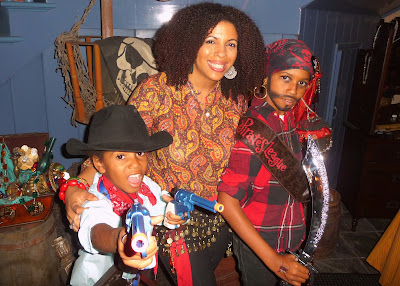 We spent the rest of the night riding rides, eating candy, watching the Halloween-themed fireworks, eating more candy, party rocking at the Pirate Disco, and interrogating the dudes dressed up as the Ghostbusters about how they made their costumes. My nosiness paid off--you can buy your own at their Etsy shop!

The good news is I get to pay the fun forward! Disneyland hooked me up with TWO tickets to Mickey's Halloween Party on Tuesday, October 9, 2012 and I'm going to give them away to one lucky Los Angelista winner.

Mandatory Entry: Leave a comment and a valid email on this post by 11:59 PM PST on Wednesday, October 3, 2012 telling me what your favorite Halloween costume was when you were a kid.

The Fine Print:
Good luck to you. I know if you win you're SO gonna do this: 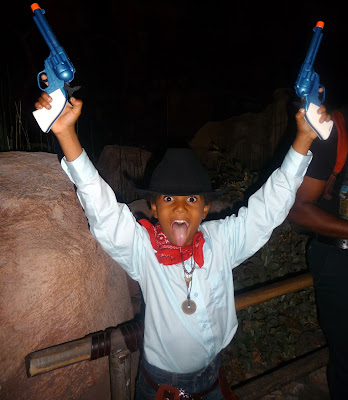 Update 10/4/12: We have a winner! Congratulations to Elizabeth Lee. She'll be going to Disneyland next Tuesday! Thanks to everyone who entered.
Email Post
Labels: a los angelista giveaway Disneyland Halloween Mickey Mouse

Jen said…
I love Disneyland! When I was a kid my favorite costume, which I wore million times, was a jack-o-lantern that my mom sewed for me and my little brother. When I got too tall, I just added tights! My e-mail is jafloyd_at_gmail.com.
8:15 AM, October 02, 2012

Ileana99 said…
I love Disneyland!!! And I have never had the chance to go during the Halloween festivities, so this would be awesome to win! When I was a kid my favorite costume was a gypsy. And it wasn't a pretty gypsy, it was the ones that had the mole and scary vibe to it. My sister and I would pretend to read the future from our glass ball ( an actual soccer ball, haha) and it was just one of those costumes we never grew tired of.
9:02 AM, October 02, 2012

Ileana99 said…
I also love your page and I am one of your biggest fans! I also follow you on your twitter! @ileanalopez99
The url to my tweet about your giveaway is
https://twitter.com/ileanalopez99/status/253163295270371328

SeeNev said…
When I was a kid, I had a dinosaur costume and went trick or treating, but I was so shy that I didn't want to keep doing it, so I told my parents my tail was too heavy and I wanted to stop.
9:13 AM, October 02, 2012

EYL said…
Elizabeth
Hi! Favorite childhood costume was definitely a salt shaker, given that I had a pepper shaker with me as well...

Michelle @Flying Giggles said…
My favorite costume when I was a kid was a fairy princess costume that my aunt made me. She also made her a matching costume! Thanks so much for the chance. My daughter will be thrilled to go!
gigglesandlollipops at gmail dot com
11:40 AM, October 02, 2012

Jeff Partain said…
My favorite costume was definitely my old school Dracula (Bela Lugosi style) costume. I was into the old horror films as a child and wanted to look like the 1931 Tod Browning Dracula. My mom was never a big fan of Halloween, but she helped me achieve the black & white look I was going for.

boyzrule said…
I am going to date myself, but my fave costume was the homemade hobo costume. Hey the 70's had inexpensive costumes.

Cara said…
I don't think my comment worked so I will try again. My favorite costume as a kid was a Witch! Loved all the makeup and would love to go to Disneyland for Halloween.
Thx - Cara76@gmail.com
1:03 PM, October 02, 2012

GonePhishing said…
My favorite costume as a child was "yo ho let's go - a pirate". Nothing better. gonephishing@gmail.com
1:09 PM, October 02, 2012

Unknown said…
I LOVE Disneyland and my son would have a BALL! I am already a FB Fan. You can find my Twitter post @UHeardMeRight
4:32 PM, October 02, 2012

Anonymous said…
The only costume I remember was something similar to a Barbie doll with the hideous plastic masks with large eye holes!

Anonymous said…
Oh, and I "liked" your Facebook page.

Bonnie said…
I once dressed up as a pilgrim and it has forever stuck out as my most memorable halloween ccostume!
6:24 PM, October 02, 2012

FourPartains said…
I love Disneyland at Halloween time! My favorite costume is a toss up between the year I had the rainbow colored clown wig, red nose and crazy striped clown suit and the year I dressed up as a witch with a big, pointy, black hat and straw broom...keeping it traditional! Although, I would have loved to have been a Ghostbuster!

Douglas Wilson said…
Mandatory entry - as a kid, our religion didn't let us celebrate Halloween so I never had a costume. That all changed when I had kids - celebrate every year!

Jeff Partain said…
I tweeted and liked your Facebook page too.

April said…
Favorite costume when I was a kid was some wierd alien. It was a blowup alien hat that was huge and everyone wore one! For the life of me, i cannot remember what those costumes were called but it was fun.
12:37 PM, October 03, 2012

Terry said…
I just Liked Your Page, I hope we win the tickets to Disneyland, My Kids are overjoyed already:) I feel like I am 8 years old again at Disneyland. I have never been there during Halloween and would love it! My FB Username is Richard N Terry Carrillo. I also subscribed to your newsletter. What a great thing you are doing!
2:41 PM, October 03, 2012

boyzrule said…
Here is another

Yara Rubio said…
When I was in 2nd grade I really wanted to be a unicorn for Halloween. After going to countless stores, and being unsuccessful my mother and uncle opted to make me the costume from scratch. I was over joyed, loved the costume, and won most original at school. I felt fab!<3 The magic of childhood. :)
8:55 PM, October 03, 2012

timelesstotes said…
Getting the word out - I tweeted again.

If you can't tell, I really want to win LOL.

Diane said…
My FAVORITE costume as a child was Casper. Remember those hot plastic face masks? The kind that never lined up with your eyes just right. It made walking and holding the heavy bag of candy a real skill.

I think I recycled that outfit for a few years. I am certain I wanted it because of the cartoon. Costumes have come a long way right LosAngelista? PS Your kids look so animated. I can't tell if they are enjoying themselves or not!
8:52 AM, October 04, 2012