Can a Billionaire Ever Really Relate to Poor Kids Who Drum For Cash on the Street? 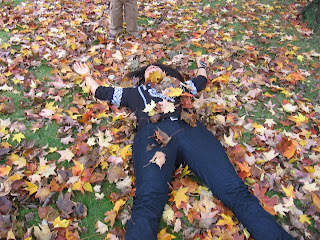 Last week I was in Chicago for four days attending and speaking at Chicago Ideas Week. It was an incredibly inspiring "think tank for the masses." And, even though I agonized over my talk, it went pretty well. You know how I know? LeVar Burton--OMG, Reading Rainbow, Kunta Kinte, Geordie La Forge!!!--told me it was great. Yes, that's definitely going on my list of Amazing Moments in Los Angelistastan.

Between sessions and after hours I saw old friends, hugged and kissed my mom, dad, sister and other family, got leaves thrown on me, and took in all the colors and smells of autumn that I don't get to experience in the Mediterranean clime of Southern California. I also rode the Evanston Express north from the Loop to visit places that used to be second homes for me: the Baha'i House of Worship in Wilmette, Blind Faith Cafe in Evanston, Heartland Cafe in Rogers Park (yup, I'm a revolutionary, crunchy granola kind of gal) and the bustle of Belmont Avenue (there's your edginess). Oh, and I almost got flattened by a CTA bus running a red light on Michigan Avenue.

However, despite all the inspiration and wonderful memories, there's one particular incident that I keep thinking about.

Last Friday after the conference's sessions were over, I headed back to my hotel, the Hyatt on Wacker Drive. As I walked north along Michigan Avenue toward Wacker, I could hear some pretty amazing drumming. It got louder the closer I got to the corner of Wacker. Louder, ever louder...until I saw a boy sitting against a wall, drumming his heart out on an upside down plastic bucket.


Although the kid was puttin' in work, there wasn't much in his donation bucket so I dug a dollar out of my wallet and dropped it in. Even though I needed to be somewhere else and I was running late, I couldn't walk away. I wanted to know where such a talented young man had come from. So I asked.

"I'm from the hunnerds," he replied.

"The one hundreds?" I asked. I was a bit shocked that this kid came all the way up from the deep South Side of the city where the east-west streets don't have cool names like Touhy and Devon--they're all numbered.

"Yeah, the hunnerds," he shot back, giving me a side eye like I was slow. Or annoying. Or an annoying adult who's asking condescending, "Hey sonny, what's your name and are you having fun out here drumming?" questions.

I managed to find out that his name is DeAngelo and he's a high school freshman. The guy hovering to his right in the red, white, and black jacket is his older brother, standing there to make sure DeAngelo doesn't get robbed. They'd traveled 16 miles--over an hour by train and a bus--to come up to a corner where, as DeAngelo put it, "people give me money to drum."

"Where'd you learn to drum like that? Music class? You in the band?" I asked. A kid with his talent certainly should be in the band.

"Naw, I learned to drum on the street. All by myself. I ain't never had no music class," he proudly replied. I asked him where he went to school and he told me. It's a school that, despite being in a tough neighborhood has a proud history, a school that I know for sure has a band. I wondered why DeAngelo isn't in it. But there's a difference between nosy adult and creepy adult so I put another dollar in his bucket, told him to stay warm and be careful, and said goodbye.

I've thought about DeAngelo quite a bit since last Friday. There's so much talk about how kids need entrepreneurship skills and simply need more grit, more perseverance, to make it. Well, DeAngelo has both, but given the statistics for a black male in Chicago, I'm not convinced that he's going to go to college, or that he'll one day be able to hone his musical talents in a safer setting.

Last night when I was watching the Presidential Debate, all the talk about education and creating a stronger middle class made me think of kids who are decidedly not middle class. Kids like DeAngelo who are poor.

We have a hard time with the word "poor". We prefer "low income" or "disadvantaged", but if you doubt that DeAngelo's poor ask yourself this: How many middle class kids do you know who will travel that far to hustle for money after school? Middle class kids who are freshmen in high school are chillin' doing their homework, at a sports team practice, or playing video games with their friends. They're not out on the cold on Michigan Avenue on a Friday afterschool, hoping someone will drop a dollar in a bucket.

As I watched Mitt Romney trying to start an argument over whether President Obama knows what's on his pension statement, I wondered if a millionaire like him has any clue what life is like for the DeAngelos of the world. I'm asking not to be mean to Romney. After all, when I was a kid I never really had to hustle for cash like that, so I can never really put myself in DeAngelo's shoes. And while the neighborhood my parents live in isn't perfect, I can sprawl out in the grass in their front yard and tell my sister to make it rain with some leaves without feeling like my life is in danger. DeAngelo might not be able to do that.

So, how does Mitt Romney, heck, how does anybody who's wealthy beyond even my comprehension keep a connection to kids like that? And then come up with policies that can help them?

nick said…
I think the wealthy only understand what it's like to be poor if they've been poor or at least hard-up themselves. If they've been rich their whole lives, they don't have a clue. Someone like J K Rowling is fabulously rich but has also known hard times and can understand the other side of the coin.
5:34 AM, October 18, 2012

Unknown said…
Liz, you know my heart and passion for our young men, and this made me sob... you attacked this with fresh eyes and gave me inspiration to stay at work today and make a difference - thank you, friend <3
7:32 AM, October 18, 2012

Liz Dwyer said…
Phyllis,
Oh gosh, I should've told you guys--I was seriously stressing before I headed to Chicago. A lot going on at home, at work, and worrying over my talk and what I was going to say, getting the images together, etc. I swear, I should just stop agreeing to do TED-style talks where you have to talk for 14 minutes and have it memorized. :)

Nick
JK Rowling is an excellent example of someone who knows about the school of hard knocks. It does make a difference. Someone on Twitter pointed out that the Obamas are now millionaires--well, they weren't always wealthy. And especially Michelle, has that groundedness.