If You're Going to Run Depeche Mode's Website, Spell the Band's Name Correctly 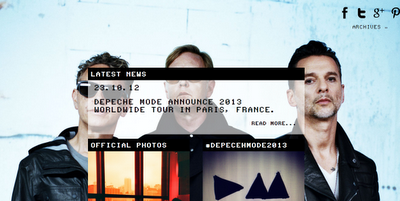 For most of you, October 23rd is just another Tuesday, but in the Depeche Mode universe, today's the day the band had a press conference in Paris announcing their new record and plans for a world tour. I got up at 4:30 this morning to watch the live stream of it. There was plenty of awkward-cool misfit adorableness to go around--just what I needed to brush off my post-Presidential Debate nightmares of teachers stuffed in binders. And then I went to the website and looked at the homepage.

Martin Gore, on the left, has his hot rocker steez going on. Fletch, in the middle, maintains his undercover glue of the group status with his eyes hidden underneath shades AND a black line. And, on the right, Dave Gahan is giving us his best grizzled statesman of alt/electronic/rock music look. Never mind that it's not immediately obvious where the heck I should click to get to the fan forum, etc, the boys look good. And then I saw #DEPECEHMODE2013.

As in Depece H Mode. Sigh.

This is entirely the fault of the company running their site and their copywriters. I don't know the name of their company but this error was on the site for HOURS. It's the kind of thing that if I was in charge of Depeche Mode Land, I'd be giving my best Red Queen from Alice in Wonderland performance. Off with their heads! You do NOT misspell the name of the godfathers of electronic music on their own site.

On the other, I'm slightly sympathetic for two reasons. One, I can't tell you how many times I've accidentally typed PUBIC education instead of PUBLIC education. Fortunately, I, or someone else, catches that travesty of Freudian slips before it gets published.

Two, I know how hard it is to launch a new site and tech glitches are a dime a dozen when you're doing that. But COME ON SON! This is the name of the band in a hashtag on the home page! Think of the impressionable children, aimlessly tweeting #DEPECHEHMODE2013 instead of #DEPECHEMODE2013. Personally, I think we can just cut to the chase and tweet #MartinGoreIsTheBombdizzle. Sums up everything.

Maybe they should consider letting someone who knows what he's doing run the site. Since, you know, he knows how to spell the name of the band.