When Your 10-Year-Old Knows Too Much About Gangs, Drugs, and Graffiti 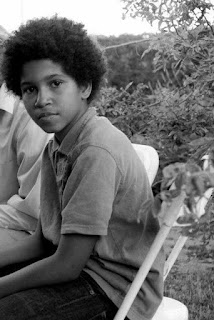 Last night my 10-year-old fifth grader, Mr. O, asked me to read over a school assignment, and of course, I was happy to do so. He'd been tasked with writing about a problem in his community, and as I sat next to him on the sofa, reading over his typed, 813-word essay on gangs, drugs, and graffiti in our neighborhood, I was simultaneously proud of his writing and insight, and also heartbroken.

I asked Mr. O to email me his paper and I told him I was going to post it here so people could read what he wrote. He was a little nervous about that, but I told him that authors write for readers and maybe his writing will get other people thinking about this, or other community problems, and what they can do about them. Mr. O wrote:


The issue in my neighborhood is gangs, drugs, and graffiti. The issue affects many people in my neighborhood. For example I saw somebody get pulled out on a stretcher because of drugs. The issue has been a problem for a long time and people have tried to do something about it but it just keeps coming back. I remember it being about 9 pm and my brother and I were at the apartment with my parents and we weren’t really doing anything. Thirty minutes later the police closed off the block because they were looking for criminals who were reported to be there. Eventually they found 5 people that they arrested because they were doing illegal things.

The effect that graffiti has in my neighborhood is that it is at a lot of places and sometimes it says offending things. It has bad words scribbled all over the wall and it covers nice and respectful art. The issue affects many people in my neighborhood because for example there was graffiti on our apartment wall and we had to paint over it and a couple of blocks away somebody scribbled graffiti all over the wall and they painted over it with words that said "Art not War".

The worst problem in my neighborhood is the gangs. The problem with the gangs is that they steal, they hurt people and they do illegal things. The police do all they can to stop it but they have the rest of the city to take care of so we need to do our part to keep the neighborhood safe! I feel like we need to take a stand up to gangs because they are messing up their lives and going to jail.

What I think our community can do is clean up all the graffiti and paint over it with art and if we see somebody tagging we'll tell them to stop. Maybe a couple months later we can see how the graffiti problem is going. We can keep painting over it and see if they give up but if they don't people should call the police or go to city hall.

The thing we can do about drugs in my neighborhood is we can call the FBI and see if they can find the source of it and stop it or maybe scare drug dealers into stopping it. The thing I think the community can do is to stay away from the drugs as much possible and convince their family members to stay away from them. If anybody sees drug dealers they can call the police.

Gangs with people under the age of 20 present a growing challenge in terms of school, safety, and violence. These are three things I think a lot of people have challenges with. An interesting fact is the U.S. Department of education found that 37 percent of students say that there was a gang presence in their schools. That was in 1995.

There are three things that I can do to solve the problem. My number one, and to me it is the most important, is setting the best example I can for my little brother. The reason I would set a good example for my little brother is because if he sees me getting involved in stuff I shouldn't, he'll think it would be O.K. for him to do it because he saw his older brother doing it and he looks up to me.

The second thing that I would do to is get people to notice the problem in my neighborhood. I would talk to the reporters of the L.A. Times and see if they can report it as a story in the paper. The reason people would notice this is because a lot of people read the L.A. Times and they would say, Wow somebody should take a stand about this. And a couple of weeks later everybody in L.A. knows about it.

The third thing I can do is speak out about it. The audience I am looking for is all of L.A. and especially people in gangs or people thinking of joining gangs. I want to try to get them to realize that they are going down the wrong path and show them that there are greater choices for them and that if they go down that path they'll mess up their lives and go to prison.

I hope when people read this they will think that it is important to stay away from gangs, drugs, and graffiti. They should realize that it's not a very good thing to do and a lot of it that it has to do with is illegal, so they should stay away from it. It worries your family and makes them concerned for your health. If my neighborhood didn't have gangs, drugs, and graffiti, it would be a better place.

I don't think I wrote this kind of stuff when I was 10.

Really, it wouldn't have crossed my mind to research data from the USDOE about gang involvement in schools, but Mr. O knows how to work the internet. He showed me the report he accessed and some of the information in it that he didn't include in his paper. I was pretty blown away by that.

I love that he still has faith that reporters from the Los Angeles Times care about this issue enough to write about it regularly. We adults are so jaded, none of this stuff is news to us anymore. I admire that he's not afraid to speak up about these issues--maybe I have a budding community activist on my hands. But, most of all, I love that he wants to be a role model to his little brother, Mr. T. I hope he never forgets that commitment to him.

Our neighborhood isn't the absolute worst in Los Angeles--but there's no denying that it has its share of problems. If I go down our hill, there's always some drunk passed out under a tree and a bunch of discarded furniture. I suppose I tune it out as one of the side effects of living in a city. But seeing it through the eyes of my son made me feel...like a bad mom. I feel terrible that I can't afford to live somewhere else where he doesn't have to worry about these things.

That said, I know the answer isn't to hide these issues from my kids, especially since Mr. O's going to middle school next year. It's about to get real for him. Undoubtedly, 10-year-olds--children of all ages--all over this city are thinking about the same things Mr. O is thinking about. I wish they didn't have to.

Unknown said…
This is a really great post and your son is a terrific writer. I got a tears in my eys when I read about his desire to be a good example for his brother. He is going to be a great leader one day. I just know it.
7:20 PM, October 27, 2011

nick said…
Absolutely, if only youngsters didn't have to worry about these now totally routine things. It's shocking to think none of them even crossed my mind when I was ten. I also like it that one of his big concerns is showing a good example to his younger brother. He's a very thoughtful and responsible kid.
12:29 AM, October 28, 2011

Liz Dwyer said…
Disneyland Mom,
Thanks for saying so. I'm so glad he wants to be a good example for his brother...but the way they were arguing this morning over whose turn it was in the bathroom...good grief, I'm amazed that those two are still speaking!

April said…
Wow. I'm blown away, and ironically, I was thinking what a GREAT mom you are as I read your son's words. He cares about his community, he's come up with some great ideas for solutions, and he cares about being a good role model. Not to mention, of course, he's got your writing chops.
9:56 AM, November 03, 2011