I Survived the Los Angeles Rock-n-Roll Half Marathon 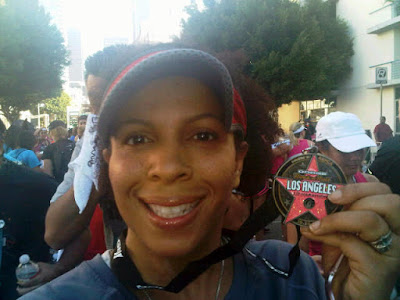 a. Thank GOD that's over.
b. How ya like me now?
c. I know Bret Michaels is rocking out but I want to go eat at House of Pies instead of watching him.
d. All of the above.

If you chose answer D, you win a cool $1.2 million, just like I win every day in my email. (You don't even have to send me your account info to get it. It's virtual money, mmkay?)

Indeed, today I ran the Los Angeles Rock-n-Roll Half Marathon--13.1 miles through deserted downtown Los Angeles. This is the second year of this race--and my second year running it. It was warm and sunny the entire time--I think I upped my skin cancer ante during it. But, here are 10 things I liked about this year's race:

1. Plenty of port-a-potties at the start. There's nothing worse than long lines of runners waiting to go before the start of the race. LARNR had so many port-a-potties that I didn't have to wait at all. The Los Angeles Marathon should take notes. Every year, the bathroom situation at the marathon is a hot mess.

3. Bret Michaels performed at the finish: I didn't stick around to watch him but he sounded good and looked normal. Normal, as in, bandana wearing and glorious hair extensions.

4. Mostly flat course: I don't mind running hills but flat is nice on a hot day. Ugh, the 80-degree weather really got to me today.

5. Scenic fun: The most scenic parts were running through the tunnel on Third Street--the echo in there was awesome and it was shady--and running back towards the city across the Sixth Street bridge. Look at that view of the city: 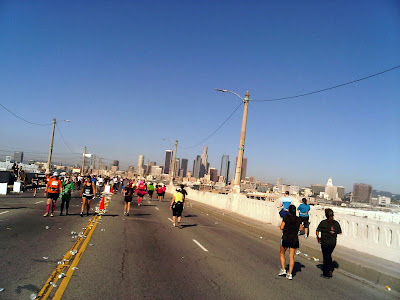 7. My running club, the L.A. Leggers: I ran with other members, which was fun since it's always nice to have a friendly face, and even members who weren't running came out to cheer us on and offer us orange slices.

9. I have an excuse to eat Halloween candy tomorrow: A guilt-free Halloween. Dang, I should run 13.1 miles every year before Halloween.

10. I got a medal at the end! Bling, Bling. Everytime I come around yo city, bling bling!

1. Snooze: Although the course was mostly flat, it was also pretty boring. Last year we ran from scenic Griffith Park into downtown. Yes, that was a hilly course, but at least there were spectators for most of the way and way prettier things to look at. This year, other than a turn around the Los Angeles Memorial Coliseum, it was all concrete, office buildings, condos and industrial warehouses. Oh, and I was like, "Look, there's the jail!" at one point when we were on the bridge.

2. Running the same street twice: If I run south on Figueroa, I don't want to run turn around and run north on Figueroa. I do that kind of thing on training runs and it's just kind of lame to do it during a race. Yes, I know doubling back means less street closures, but seriously, it makes the race even more boring.

Stefanie said…
Congrats! I am trying to begin running, and I was curious on what got you started and brought you to doing marathons and half marathons. That's an awesome accomplishment!
10:24 AM, November 01, 2011

Stefanie,
Thanks! I started running because I found out about the couch potato to 5K program. I did that, liked it, and so decided to run a marathon from there. When I started training, I'd never run over a 5K distance. I'm proof that ANYBODY can do it!
6:14 AM, November 02, 2011