6 Reasons Why You Should Go to Disneyland at Halloween

First of all, I'm trying to think if it's possible to not have fun at Disneyland. I can only come up with...on a really hot day when it's noon and you're standing in line to ride the Matternhorn. I've done that before and it's heatstroke-inducing.

Beyond that, Disneyland really only comes in two categories: A. fun, and B. insanely fun. A couple of weeks ago, the park invited me and the fam to head down to Anaheim for Mickey's Halloween Party. It's a special, ticketed event on Tuesdays and Fridays this month, and on Halloween night, and yeah, it majorly falls into option B. Here's why: 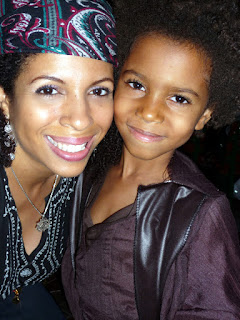 1. Where Else Can You Wear That "Gypsy" Costume? And take pictures with an Anakin Skywalker that will NOT go over to the dark side? Without people looking at you like you're crazy? I mean, really. Folks are rolling around dressed like the Evil Queen and Maleficent so you can't go wrong.

2. Adult Trick-or-Treating: Sure, the kids will get plenty of candy but YOU will get to reclaim the years of trick-or-treating fun that you lost because of rumors of razorblades in chocolate and the Atlanta Child Murders making your parents afraid to let you out of the house. (Note to self: Find new therapist.)

2. You Can Be a Picky Trick-or-Treater: When you go door to door in your neighborhood, you have to take whatever someone's giving out. However, at Disneyland, I saw folks being all, "Um, I don't eat peanut M & M's. I only like plain ones," and the Disneyland employees were totally, "I know this heffa didn't just say what kind of candy she wants "Oh, no problem. Here's some plain ones for you." And they said it with a smile. A super sincere-looking smile. Kudos, hardworking Disneyland employees. I am still amazed. 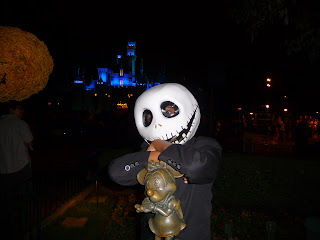 4. Rolling With an Authentic Jack Skellington: It helps your street cred if your Tim Burton-obsessed 10-year-old wants to dress up as The Nightmare Before Christmas' main character, Jack Skellington. And then other visitors to Disneyland think he's a Disney cast member walking around the park, so they start asking, "Hey Jack, Can I take a picture with you?"

That said, I had to put a stop to some frisky women in the Pirate Disco--which had an awesome conga line--who were being a little extra with Jack. "No ma'am, that's my son. He doesn't work for Disneyland. He's 10."

5. Ghost Galaxy: Space Mountain, which is just about the only rollercoaster I can handle these days, turns into a spooky ride through a ghost's lair. It's even better when you're rolling with Jack Skellington. And look how much fun these dudes in front of us are having! They're like, "Yeahhhh booyyyy! I'm 10-year-old again!" 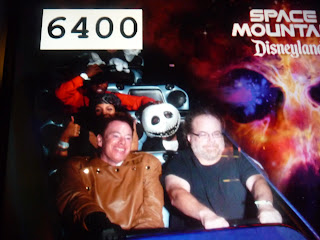 6. Fireworks: Disney's famous for their fireworks and they get an extra spooky twist at Halloween. No, they don't make me cry like the ones at Christmas do, but they're still gorgeous and fun. 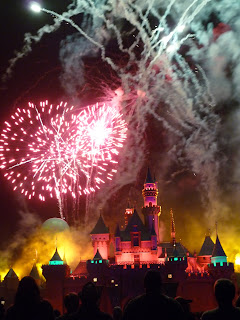 We stayed till the park closed at midnight, hung out in Downtown Disney till 1 a.m., and then drove home. I was totally exhausted but the fun was SO worth it. Hmm...it's Friday...maybe the fam wants to go again tonight!
Email Post
Labels: candy costumes Disneyland fireworks Halloween

Doodling said…
AGREED, so hard. Halloween is one of my favorite holidays, and I wish I could hang out with a few rugrats just so that I could go trick-or-treating again. Majorly jealous!

Liz Dwyer said…
Doodling,
IKR? Halloween for adults turns into high pressure parties and the costumes--sexy nurse or sexy librarian--aren't as fun. So fun to have an excuse to trick-or-treat.
11:34 PM, October 16, 2011

Liz Dwyer said…
Oh, and sort-of. I mostly use sunblock. I've been a religious user of Neutrogena sunblock for the past 12 years. I use two different ones and one of them also has a moisturizer. Other than that, for this picture I think I was making good use of my MAC concealer. ;)
11:36 PM, October 16, 2011