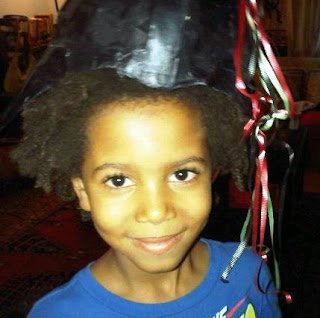 Ever been to one of those kiddie birthday parties where there are pony rides, a magician, puppies in a fenced-in space, and some very stressed out parents?

My youngest, Mr. T, turned 8 on Saturday and when it came to planning his party, I had a big Not The One sign on my forehead. Like you, I simply don't have time to plan a major production. And, whose idea was it to overcomplicate kid birthday parties (can we blame this on ad agencies and companies?) to the point that they turn into wedding reception-style events that cost major dinero?

Well, today T was raving about how his party was the best one he'd ever had and I realized that I'd had a lot of fun, too. Here's why I think it worked: 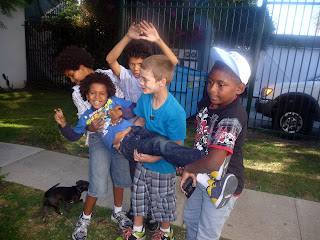 1. A small number of kids: It's been said before but for real, every kid in your child's school, tai kwon do class, basketball team, and Bible study group doesn't need to come to the party. When I asked Mr. T who he wanted at his party, he told me three names. At first I kept bugging him, what about such-and-such? Then I realized that his being able to identify the kids who are truly his friends was the best thing ever. Even I could handle a party with three guests, and, duh, smaller parties are less expensive.

2. A lack of over-organized activities: I'd thought about doing water balloons, but then I couldn't find the pack of balloons I'd bought. That forced me to think about how my boys play all the time without me micromanaging them. They're at the point where an organized activity is picking up the birthday boy and carrying him around. They also played basketball--Mr. T got the hoop as a birthday from his dad--whacked a pinata, rode bikes and skateboards, and wrestled in the grass. And I didn't stand there and supervise, either.

3. No freakout over the food: I let Mr. T decide what he wanted to eat on his birthday. He wanted BBQ potato chips, root beer and Pizza Hut pizza. No, he doesn't get to eat like that every day, but one day of major junk food isn't the end of the world. Besides, if the kids are really having fun playing, they're not sitting around munching. 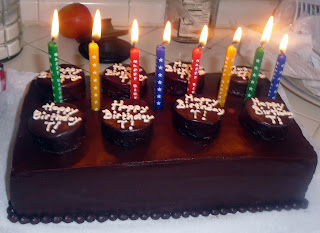 4. Let the cake be the star of the show: Just as the last thing anybody wants to eat at a wedding reception is a chicken breast, nobody wants to eat a dry, gross birthday cake. The cake is the climax of the party so if you're gonna splurge a little, let it be on the cake. Mr. T's obsessed with Legos so he wanted a cake that looked like a Lego. I got this one from Semi Sweet Bakery and all the adults agreed that is was, hands down, the BEST chocolate cake we'd ever had. The kids liked it a whole lot, too. 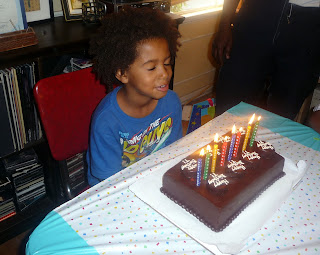 5. Let the wishing take as long as it needs: Mr. T took about a minute to decide what his wish was going to be before blowing out the candles. You can see how intensely he was meditating about it.

It's a good life lesson: Take some time to think about what you really want and don't get distracted by pressure from your friends to hurry up and decide.

As for me, several of my own wishes came true eight years ago on the day Mr. T was born and again at the end of the night on Saturday. He came and put his arms around me and just hugged me tight. It was the best to see him so happy all day, and I really got to enjoy the day with him. Here's to another year of Mr. T bringing joy to our lives.
Email Post
Labels: cake chocolate happy birthday junk food kids Mr. T

nick said…
That birthday cake is amazing! And how sensible of you to let Mr T do his own thing and decide what sort of party he wanted rather than submerge him in some over-regimented affair that was no fun at all.
1:16 PM, October 11, 2011

1969 said…
Awww...happy birthday to my internet boyfriend with the best lashes in town.

Liz Dwyer said…
Nick,
I can STILL taste how delish that cake was. YUM. And yes, a much more sane approach!