Choosing a Middle School Shouldn't Be This Hard 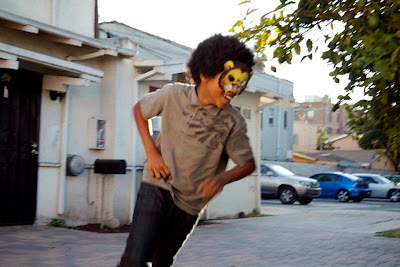 This morning I'm going on my first tour of a prospective middle school for Mr. O, my soon-to-be- sixth grader. He demanded a hair cut and was laying out his outfit before going to bed--all the things necessary before a current fifth-grader goes to check out a middle school. As for me? I'm worried about the academics and school culture.

If you haven't been in a middle school lately, they tend to be pretty insane hotbeds of hormones, thanks to budget cuts, class sizes are huge, and teachers are fairly overwhelmed by everything on their plates. It's pretty easy for kids to slip through the cracks and fall behind simply because teachers often have less time to work one-on-one with kids. Things are a little better since Mr. O is in L.A. Unified's magnet school system. They started back in the late 1970s by a court desegregation decree to end what was the judge called the harms of racial isolation. Nowadays you have to apply by a lottery and they operates a little like a private school system within the public school system.

All that to say that it's a little nerve-wracking to have to figure out which school is the best for him--all the while knowing that we can apply to that school and he might not get in. Really, it shouldn't be this hard.

One spot of comic relief is that over the past few days, well-meaning people have made some fascinating assumptions. The conversations go like this:

Blank Stare. Thanks for calling me old in Los Angeles where everybody seems to want to stay young forever--which is odd because for real, I don't want to go back to 25-years-old.

There's also this one:

Los Angelista: I'm going to check out a middle school for Mr. O on Thursday. I hope it works out.
Well Meaning Person B: He's in middle school already?
LA: Sure is. He grew up so fast.
WMPB: Yeah...it must have been so hard for you as a teen mom. How old were you when you had him?

I'm not sure whether I prefer the you're so old look at all those wrinkles version or the DANG, was it terrible having a baby at 15 one. But in the meantime, this will be the first of many trips to check out schools. Wish us luck.

amancia/newdawnnewday said…
good luck! my oldest is in 4th grade and i'm already worried about middle school. he attends a charter school that just started offering middle school this year. honestly, i don't feel like it will prepare him for the transition to high school. it is one class per grade and it's about as safe as you can get so far as bullying, drugs, sex, etc. i'm torn over whether i should let him continue there, or move him to our neighborhood jr high which just looks huge and would be such a culture shock. academically, he excels, but socially he can by shy, he wears glasses, loves to read and is mixed race in a community that is over 80% white.
if i keep him in the charter, my hope is that he will grow into himself enough to have the confidence to jump into a big high school. but i will have the same concerns of culture shock and him getting lost in a big system because he's the good, quiet kid that doesn't stand out.
i would love for him to get into one of the magnet schools but we would have to move (just 2-3 miles) to be in that district to have a better chance. but if he didn't get in we'd be stuck in that district and the two non magnet public high schools are not anywhere i'd want him to go.
so yes, my son is 9 and i worry about all of this on a daily basis. all this to say, i agree. it SHOULD NOT BE THIS HARD!
i'd say both our boys have higher chances of success wherever they are placed because they have mothers that are attuned to them and who are going to help them thrive in any environment. still, i hope mr. O gets into your first choice school!
8:10 AM, October 20, 2011

nick said…
It would be great if you could sign up your kid at any old school and know it would give him/her a proper education, but the reality is that schools can be totally different in quality and performance, not to mention whether they turn their pupils into mature, responsible adults rather than irresponsible tearaways. Having to assess a whole heap of schools for their suitability must be a pain in the butt - but absolutely necessary if you take your son's future seriously. Good luck with finding the right place!
9:20 AM, October 20, 2011

Doodling said…
Ah, middle school. My younger brother passed into that milestone about a year ago. I wish you and Mr. O the best of luck. :) Not in a bad way, either - because my three siblings and I emerged from it unscathed.
2:12 PM, October 20, 2011

Lisa Blah Blah said…
Liz: Middle school already haunts my dreams and Viva is only in 3rd grade! She is in the LAUSD magnet system as well and it does seem like such a crapshoot. From what I understand, you have no assurance that your kid is going to end up in the school of your preference. I have also had some bizarre conversations with folks about how to get Viva in to the “good” charter middle school in our area (one person told me to play up my white ancestry—huh?? I can’t see how that would help).

Lisa Blah Blah said…
P.S. Take all the comments about your age as a compliment! You are youthfully gorgeous!
9:54 AM, October 21, 2011

Liz Dwyer said…
Amancia,
I know a few folks working at charters that are expanding to middle/high school and sigh, I'm not sending my kid to a school that's unproven.

Unless I get totally desperate. ;)

And you're right, we will both keep working to ensure they have the best opportunities...but what happens to everybody else's kids? Ugh. It really shouldn't be this hard. And seriously, I want to write reviews of every school after I go visit, but I'm worried about the repercussions of that on him. I don't trust those lotteries!

Nick,
That's how it should be. I feel like parents need a PhD to navigate this system. It's crazy.

Doodling,
LOL, right? It's not the end of the world. I think whatever comes his way, we will have his back and ensure he is successful, but I'd rather zero scathing be required. ;)

Lisa,
Totally. You have ZERO assurance. You only get to pick one school, and then people play these crazy games where they pick LACES as their first choice, hoping they'll luck out, and then try to do the SAS route with the backup second choices. That's just a hot mess. And play up the white ancestry??? Oh good lord!