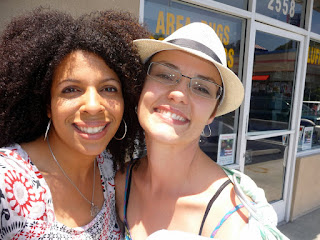 It's easy to think that Facebook is bad for your friendships. There are the folks who fill your timeline with every single annoying Farmville move they make--at least, until you learn how to filter that kind of stuff out.

Then there are those friends who only post photos of their amazing trips to all the places you've never been but want to visit--like Villefranche-sur-Mer on the French Riviera. They do their best to paint their lives as the most awesomest lives ever. Look at their amazing photos, notes and status updates. Nevermind that they feel the need to Photoshop photos of themselves before they can put them up on the site.

Of course, there are also the self-righteous folks who try to make you feel like a dummy for being on Facebook in the first place. They're worse than the people who don't join Facebook because they're freaked out about the privacy issues or don't want to get stalked by their high school past. No, the self-righteous bunch has to constantly tell those of us who use Facebook that we are dumb suckers who are selling our experiences to Mark Zuckerberg and his hydra-headed team of investors.

But while there is undoubtedly a dark side to Facebook, the main reason I'm not one of those haters is that the site has reconnected me with quite a few friends I'd previously fallen out of touch with. Yesterday I got to see two of those friends for the first time since 1999.

Indeed, I've known Kristen (pictured above) since 1991 or '92--oh gosh, it makes me feel old to type that--and she was one of my bridesmaids in my wedding. Between me living in Los Angeles and her living in Bolivia, and then both of us having super busy schedules as moms and creative people (she's an super talented designer of handcrafted accessories), before I knew it, we hadn't talked in a LONG time. If we hadn't found each other on Facebook a couple of years ago, that long time could've turned into forever. 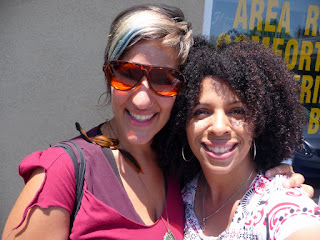 Then there's Alexis, who just moved to Los Angeles and is now an alternative healer. I've also known her since 1992 and her mom is the main reason I went to China after college. Alexis was on the verge of high school when we met and it's so wonderful to see how much she has grown up--funky blue stripe in her hair!--and how much she knows about healing and taking care of the body. Seriously, I need to have a consultation with her about my sleep issues.

What really had us all marveling was how when we saw each other, there was no awkwardness, no stiffness. We sat down and talked just like we would've if we were still still back in Chicago and seeing each other all the time. What helped that happen? Facebook. Spawn of Satan or angel in disguise?

As much as a part of me knows that Facebook would sell our souls if they could get away with it and turn a profit on it, it made my day to visit with these two sisters of mine. And gee, I didn't even have to come up with a new, cool status message to do it.
Email Post
Labels: Chicago China college facebook Farmville Friends Los Angeles

Liz Dwyer said…
Jameil,
And those naysayers always seem to want to tell you how stupid you are for using FB! Good grief, enough already! But yeah, very happy to reconnect with them. It really made my 4th of July.

Jen,
Yes, I love how nowadays even if we don'tsee someone in person, but now, thanks to technology, it feels like you're up to speed about almost everything. Totally erases any awkwardness.

Anonymous said…
The most joy I get is connecting with genuine friends on FB. By the way, I would be so honored and thrilled to have a cheek-to-cheek photo with you. Let's do that sometime.
4:27 PM, July 08, 2011