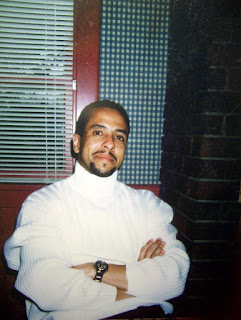 Today would've been my brother's 47th birthday. Of course, when we were kids, I couldn't see either of us being "that old". When I look at this picture of him, taken only a short while before his suicide at the age of 41, I can't help but wonder how he might've changed over the past five years.

It's easy to think of the physical changes, to wonder if he would've become fatter, or would his never ending quest to stay in shape have endured? I can't picture him with gray hair. Even when we went to view his body, it was a shock to see the sprinkling of gray along his temples. I hadn't seen him in a decade when he died, and I suppose, in my mind, I still thought of him as a young man.

The other changes he may have gone through had he held on to whatever faith he could, whatever sense of possibility was within his grasp, are tougher to fathom. To think of the future requires an honest assessment of the past, and for my brother, that's a heartbreakingly sad story littered with countless second chances, missed opportunities, and the inevitable descent back into the throes of addiction.

I often find myself wondering, what if the first time someone offered him drugs, he had turned them down? His life wouldn't have been perfect if he hadn't had substance abuse problems, but I have no doubt he would've been so much healthier and happier. And the extreme suffering and pain everyone in my family went through over the years as a result of his addiction might have been averted.

I know it's popular in our culture to believe that using drugs isn't a big deal. People like to think they're just having a little fun. They like to believe they're the ones in control. But when I look at my brother's eyes in this photo, when I remember who he once was, and who he became over the years, I know better.

When I feel the pain of staring at the gray hairs on his temple--seeing the threads where the self-inflicted gunshot wound had been sewn shut, knowing that there would never be a chance to get back the brother I'd missed since I was a little girl--I can't tell you how much that still hurts.

Despite that sadness, I am hopeful for him. There is an inevitable finality in death, but I believe that the soul progresses after we pass on from this physical world, and it does so in ways that none of us can fathom. My brother has no need for a cake and candles, or friends effusively singing happy birthday. All the earthly hopes and dreams we hold on to so desperately, he is well beyond those fleeting aspirations.

As always, the only present I have to offer is my prayers and love. I hope they find him, wherever he may be.
Email Post
Labels: addiction Brothers dreams Drugs Family gray hair Hair happiness happy birthday progress of the soul Soul substance abuse Suicide

Phyllis said…
I believe that the service we do in this world assists the progress of the souls of our loved ones in the spiritual world. Surely your brother is benefiting from the service you do for all of us through your blog.
6:10 PM, July 18, 2011

Liz Dwyer said…
Phyllis,
That's very kind of you to say so. I do hope writing about it brings the subject out of the shadows so that people who've had similar situations in their family don't feel quite so alone.
9:30 PM, July 18, 2011

1969 said…
Sending hugs your way. Losing a loved one is never easy especially when there is no closure.

Anonymous said…
A tough anniversary for you, dear Liz and a hug for you. Your honesty about suicide, however, is a huge service to others.So that is his legacy.
4:49 PM, July 19, 2011

Dena,
Love to you too, and thank you for the prayers for him. And for me. xo's.

Ian,
Thank you for the hug. I hope that in some way talking about it will help other people who've also lost loved ones in this way realize they aren't alone. xo's.
9:39 AM, July 20, 2011

Stefanie said…
It's a beautiful thing that you can be so open about your brother and his situation. I hope I get to that kind of strength about my dad...

Liz Dwyer said…
Stefanie,
So very sorry to hear about your dad. I'm sure there are some folks who think its a bad thing to talk about this, but I'm not one of them. I think this is definitely one instance where honesty is a good thing.
8:29 PM, July 21, 2011