I Forgot My Fourth Twitterversary: Good Thing I'm Not Married to the Fail Whale! 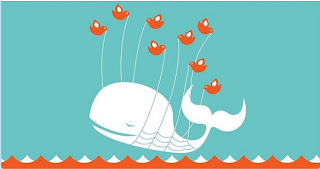 It's a good thing I'm not married to Twitter, because if I was, I'd be in the dog house right now. When I woke up this morning I realized that the fourth anniversary of me saying "I do!" and entering a social media civil union with Twitter was July 8. Which was last Friday.

Fortunately, I think the Twitter Bird and Fail Whale will get over my lapse in memory. After all, since I'm a Twitter granny, I figure I deserve a little bit of slack.

When I first joined Twitter, no one else I knew used it and most people thought it was totally stupid. A bunch of those folks are now hardcore Twitter addicts. I probably used to be a little addicted, but nowadays I don't feel like the world is going to end if I can't post something to my feed or read what others are posting. Of course, that doesn't mean I don't still love the service. I really believe Twitter is most awesome when...

But you know what drives me insane about Twitter? Other people are always trying to tell someone else how they should use it. I wish they'd shut up.

If you don't want to tweet about Phineas and Ferb or Demi Lovato having the number one song on iTunes, then don't. But seriously, leave the folks who do want to do that alone. You don't have to follow them if you don't like their tweets.

If all you want to do is tweet links to articles you think are awesome, great. I promise it won't make me think you're any smarter.

Likewise, if you want to use Twitter as a super public chatroom, and cut up like you're hanging out with your best sistergirlfriends, go for it. I won't hold any clowning you do against you in the morning.

If you can do both, even better.

As for me, like an old married couple, I'm shocked by how quickly the time flies. Four years passed with the blink of an eye. The question remains, will I give Twitter four more? (sure, why not?)
Email Post
Labels: Demi Lovato Depeche Mode iTunes Mad Men natural hair Phineas and Ferb Running Taylor Swift twitter Twitter addicts Wal Mart

Jameil said…
HAPPY VERSARY!!! You're the one who got me on twitter 8mos later and then I got Rashan on it w/in days but he didn't really use it for years. LOLOL Twitter is the BEST for communicating w/people far away & AWARDS SHOWS!!! All awards shows are MEANINGLESS w/o it!! I def. follow that ignore while they're in their moment or unfollow rule for people who tweet annoyingly. As a result of my rather stringent rule, I get people who are pretty pissed that I don't follow them. It's not personal, you just irritate me. LOL Or post too much but if I like you enough, I'll check back in and put you on my private list and follow you w/o you knowing!
9:03 AM, July 13, 2011