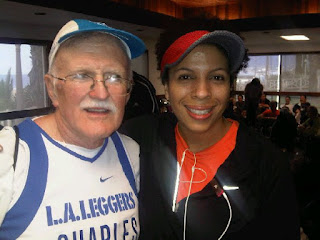 Tomorrow morning I'll be joining 25,000 runners from around the world for the 26th annual Los Angeles Marathon. It will be my third LA Marathon and, less than 13 hours from the start time, I am feeling pretty nervous about it.

I might be more nervous for this one than I was before my first marathon because I'm not a naive newbie anymore. I know how HARD it is to run 26.2 miles. But, despite my pre-race jitters, thanks to 74-year-old Charles, a member of my running club, the L.A. Leggers, I'm also feeling inspired and ready to rock this race!

You see, Charles has run 173 marathons and tomorrow will be his 174th. He's run races in all 50 states. Twice. And in case you're wondering how old he was when he started, he was 64-years-old when he ran his first race.

I'd heard about Charles before but we'd never met till this morning when he joined up with my pace group for one of the Legger's pre-race traditions, the Saturday-before-the-marathon one mile fun run. Charles ran with my group this morning and as I watched him put one foot in front of the other, I thought to myself, if he can do it, I can do it!

Marathons aren't supposed to be easy, and tomorrow's will be no different. It's supposed to rain and be cold and windy, and given the chest pains I had back in January, I'd be lying if I didn't admit I'm a teensy bit afraid I will have a heart attack out on the course and die. But, I've been training for this race since August. Let's do this!
Email Post
Labels: chest pain Los Angeles Leggers los angeles marathon marathon training marathons runners Running

Jameil said…
Liz! I love you like the half Irish sister I never had! But I'ma need you not to be s "teensy bit afraid" you "will have a heart attack out on the course and die"! Girl bye with all that! You are straight trippin! You're gonna go out there and rock that marathon BECAUSE you know what to expect! You know how your body works and how to pace yourself. You're gonna ROCK IT! THAT'S all you're allowed to think! You're the best!
7:30 PM, March 19, 2011