Did You Know March is Black History Month? 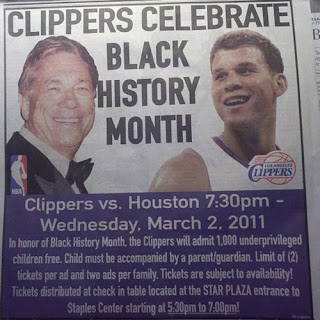 Did you miss Black History Month? No worries, it's moved to March—in fact it started today. Seriously.

At least, that's what Clippers owner Donald Sterling believes. He mandated that tonight's game against the Houston Rockets would be a chance to celebrate Black History Month.

Clearly, Sterling has listened to the countless black folks in his employ say how annoying it is that Black History Month gets the shaft and is assigned to the shortest month of the year. We should be APPLAUDING his game-changing efforts to do step up and do something about this egregious slight.

I mean, Sterling is a hero! Who else has taken the initiative and just said "Bam! I'm a rich white guy so I'm gonna make it happen for black people and right what is so clearly wrong!"? Ask yourself, has Charlie Sheen ever done something so amazing and history-changing?

To make things even more exciting, the advertisement said the Clippers "will admit 1,000 underprivileged children free." Bless Sterling's soul for making the connection between black history and being an underprivileged child! I've never made that connection myself, and gosh, I feel so enlightened now that its been made for me.

Plus, Sterling gets kudos for bravery. I've heard rumors that he found the kids by personally rolling through the streets of South Central with a megaphone yelling, "If you're black and a child, I know you're poor, so come get your free ticket!"

All those underprivileged black kids in the building must've inspired the Clippers because sure enough, they WON the game.

If you're wondering what else Sterling has planned for his new Black History Month... I've heard he's decided to give a dollar to every black person in Los Angeles. He's also changing the Clippers uniform and putting an X on it in honor of Malcolm X. And, instead of shouting "Clippers" after a team huddle, they're gonna holler, "Keep hope alive!

los angeles maid service said…
Maybe something is wrong with Sterling. He might have over eaten or he needs to eat to stop these "bright" ideas from surfacing.
10:18 AM, March 03, 2011

K. Rock said…
Yeah I saw this and I thought it was ridiculous. Not even so much BHM spilling over into March. It was the refernce to the underprivileged kids. I mean really dude? BHM=poor kids? I get what you are trying to say...and I don't like it.
12:52 PM, March 03, 2011

Mama C/Catherine said…
This is a brilliant post. I loved the image of him cruising the streets with the bull horn to give out the tickets. So happy Love Isn't Enough picked this up and shared it too. Thank you!
2:39 AM, March 09, 2011