Even in L.A., Chickens DO Cross the Road (and Get to the Other Side)

Once upon a time in Los Angeles, there lived a very indecisive rooster. He was so indecisive he had two hen girlfriends that he couldn't choose between. One day Mr. Rooster took his two hens out on the town in Hollywood, and as they strolled Santa Monica Boulevard, he came up with a novel idea! Whichever hen could cross the road and get to the other side without being turned into separated chicken parts would be the hen to win his heart forever. 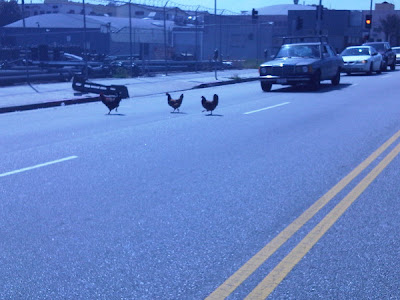 What Mr. Rooster didn't count on was the generous, animal-loving hearts of Angelenos. The city's drivers might try to run down a pedestrian or bicyclist, but four lanes of traffic will brake for a posse of chickens. Both Mr. Rooster and his two hens crossed the road and got to the other side. Poor Mr. Rooster! How will he decide between his hens?