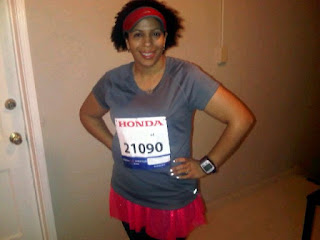 You know how I know I have PTSD from running last Sunday's Los Angeles Marathon in a torrential downpour? When it started raining today, I looked around for a trash bag--the cheapskate runner's version of a rain poncho--to throw over myself.

The weather conditions during the race were BRUTAL! We had bitter cold, high winds and a torrential downpour--Downtown Los Angeles received a record 2.42 inches of rain. At one point we even had hail! BUT, I survived the race and now I have my fourth marathon medal in my collection! So, in honor of the experience, here are

Ten Reflections on the Los Angeles Rain-a-Palooza Marathon
1) When it's a torrential downpour, don't bother trying to look cute: Because you'll just end up with a trashbag over your outfit. At 4 a.m. on race morning I was still in denial about the pending weather so I happily rocked my sparkly pink running skirt from the ever-awesome folks at Team Sparkle. I like the sparkle skirts because they make it easy to spot you in a crowd. Unless, of course, they're covered up with a big black trash bag.

2) In case you think I'm exaggerating about how insane the weather really was... Watch this video.

Thousands of runners were treated for hypothermia. Post-race I couldn't stop shivering for almost three hours.

3) Spectators: Because of the weather, not too many spectators came out. But those that did were SO encouraging. And, when your family stands out in that kind of weather to cheer you...well, you see my smile! 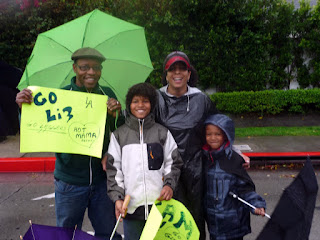 4) If you live in that building on Figueroa and Temple: Sorry, I peed in your adjacent bushes. But nobody saw because there were no spectators. At least, I hope nobody saw!

5) Run, Fatboy, Run. I love that movie and watch it the night before every race I do. But no, I didn't see Kelly Gneiting the 400-pound Sumo wrestler who is now in the Guinness Book of World Records as the heaviest man to finish a marathon. I love how he kept it real and described the race as "hell".

6) No, I didn't see the McRunner, Joe D'Amico: I love some McDonald's fries but eating nothing but McDonald's for an entire month before a marathon? I guess it worked for him though because he finished 29th overall and hey, he did it for charity.

7) Markos Geneti: Nope, I'm not at all annoyed that the guy who won the race in 2:06 and change had NEVER run a marathon.

7.5) OK...maybe I am a teensy bit annoyed. He should come with a "results not typical" warning label.

8) Flooding: With that much rain all at once, there was a lot of flooding on the roads. It was so bad through the Veteran's Administration that we had to run up onto the sidewalks and onto the grass. In some ways, it was a good thing because it distracted me from the fact that we were only at mile 20.

9) Music: During the last mile 1.2 miles I listened to two songs on repeat: The Laidback Luke remix of Robyn's "Indestructible"

and the Skrillex remix of Lady Gaga's "Alejandro".


10) Thank God for my running club: Without the camraderie of my running club, the L.A. Leggers, the race would've been MUCH less enjoyable. The club had three aid stations along the course so it was so nice to have the encouragement and smiles from the volunteers. I also ran most of the race with two other runners from my pace group and we crossed the finish line together. Given the weather, we focused more on having fun, supporting each other and making sure we got to the finish line in one piece. It took us 6:30, which is way slower than what we normally run, but seriously, we were just glad to finish. So where's the post race photo? Well, my phone died somewhere around mile 16 so I don't have many photos. But I have the memories.

Now I'm going through that whole post-marathon depression. Seriously. When you've trained for 31 weeks for a race and then its suddenly over...it feels really weird. Why do you think people become serial marathoners? (Yes, I want to do it again!)

That said, thank you all for all your encouragement and for cheering me on. It means so much...and truly, it keeps me going!
Email Post
Labels: LA Leggers LA marathon Lady Gaga mcdonald's rain Running

Liz Dwyer said…
Jameil,
Right??? When I look at that video, I'm like, what the heck was I thinking? Did I really do that??? Yeah, it was totally nuts. I love Run, Fatboy, Run. I laugh harder every time I see it. Especially the fight he gets into with his friend and when his landlord is whooping him with the spatula. LOVE it!
8:33 AM, March 25, 2011

Liz said…
CONGRATULATIONS!! I had heard that half of the registrants dropped out due to weather. Good on you for sticking it out!

Liz Dwyer said…
NYC/CR,
Thank you! Yeah, the weather has been nuts. We've had some bananas rainstorms this winter.

Monique,
Right??? Somebody send that to Dwayne and Raphael and tell 'em they need to get back together and record an updated version! I think my shoes are FINALLY dried out...but I caught a tiny cold. Ah well.

Liz,
Thank you! Yeah, a lot of people dropped out or didn't finish. Sad because the race is pricey and b/c of the time investment And I totally LOVE Robyn and I adore Laidback Luke. Such a good DJ! As far as Gaga, I was just so-so about Alejandro till I heard that remix last year. It's really fun to run to.
12:55 PM, March 25, 2011

dolphyngyrl said…
I have been waiting all week for this post! Congrats on your race & for toughing out that weather! Good on you, honey, because you are AMAZING! And, can I say? That family of yours is dish-a-licious!
3:58 PM, March 25, 2011

havetotri said…
Re: building on Figueroa and Temple. That was you? J/K! Glad you made it through! Congrats and thanks for sharing!
4:35 PM, March 25, 2011

Why said…
WOw! Way to go in bad weather!

Jennifer said…
Congrats on finishing!!! I tried to keep up with you speed demons on the last mile, but the cold was making my knee act up and I thought it better to take it easy on that last 3/4 mile and live to run another day than push it and cross with you guys. (btw...post race pic sent to your email!! Thank God for waterproof cameras! (and remembering the spare battery!...and a Legger volunteer at an aid station to use their mostly-dry hands to change it for you when you're frozen!))
11:28 PM, March 25, 2011

Liz Dwyer said…
Dolphyngyrl,
I started writing it on Tuesday and then my computer crashed and I lost it all...so it took me two days to get back to it! Thanks for the congrats. SO appreciated, and thanks for the compliments on the fam. :)

Havetotri,
Hahaha! Very funny. Thanks for the congrats and right back at you! Nice pic with the medal!

Why,
Thank you! Yes, I can't wait till the next race. Pasadena half, maybe?

1969 said…
I am in awe! You know this right? Kudos to you for braving the elements and finishing that race. So proud of you and I know the men in your life were proud too. Love the post race picture of the family.
8:00 AM, March 28, 2011

Amy Anderson said…
You are so amazing! I couldn't believe the weather and I was thinking about you that morning. Congrats!
11:33 PM, March 28, 2011