Thanks, Chest Pains, for Banning Me From Running 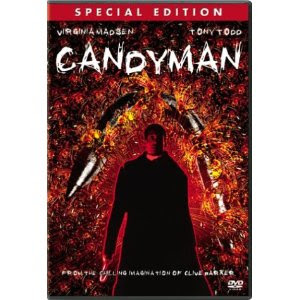 This Saturday, a certain marathon runner (that would be me) is not running 22 miles. Nope, no heavy mileage training runs for me.

In fact, I'm not running or engaging in any form of strenuous exercise at all until further notice. As much as it pains me to admit it, it's the doctor's orders.

Why the doctored-ordered cessation of all physical activity?

Monday night I headed to the gym after work and I decided to put in a few easy miles on the treadmill. Mile one felt fine. Mile two was great... until around mile 2.5 when I started feeling dizzy and breaking out into a cold sweat.

I slowed down a bit, but by mile 2.8, I had to call it a wrap. I thought I was going to faint so I grabbed the bar in the front of the treadmill-which happened to read my heart rate. I clocked in at 173-which would be great if I was 10 years old.

I went and sat my behind down in the reception area. That's when the actor that played the Candyman walked in. Freaky!

I didn't even say "Candyman" three times but weird stuff started happening. I began having shooting pains going up my left arm, across my shoulder and, ta-da, sharp stabbing pains on the left side of my chest.

I felt so awful, I actually let my husband-officially known as the world's worst driver-take the wheel on the way home. Once home, the pain got worse-and I decided to go to sleep.

Why didn't I go to the ER? One, I hate going to the doctor or engaging with medical professionals of any time. Two, I was NOT about to pay for the cost of visiting an ER only to have them tell me to go home and chill out.

Nevermind that they could've possibly said, "Ma'am, you're having a heart attack." Nope, I went to sleep and promised myself that if things weren't feeling all that great on Tuesday, I'd take myself over to UCLA Medical Center and get checked out.

Sure enough, guess where I ended up on Tuesday? Yup, at the doctor's office, freaked out that maybe I really was having a heart attack since I was still having pains in my arm and chest.

I had an EKG-which would not be fun if you're a guy with a hairy chest. Ouch. The results are OK, but I have to go back and do a treadmill test since I experienced pain AFTER exertion.

Why couldn't I do the treadmill test yesterday? Oh, because I have an HMO and I have to get approval from the health insurance company first. Yup.

In the meantime, I'm banned from exercise. No 22 mile run for me. I'm pretty depressed over that. But, I guess it's better to be safe than dead at mile 11.5.

nick said…
Wow, that all sounds a bit scary, Liz. Sounds like some sort of heart problem it's not wise to take lightly. I hope it doesn't turn out to be anything serious. As you say, the insurance companies there seem to have far too much control over medical treatment, quite often with negative consequences.

It'll be a shame if you have to give up the distance-running, but health is more important than clocking up the miles.
1:07 AM, January 06, 2011

K. Rock said…
OMG. Did Candyman look at you and snicker when he walked in? If he did, then he definitely put his Canyman mojo on you. If he didn't, then you should be fine. I hate going to the doctor too so I probably would have taken the same steps you did. A nap can cure anything!!

Jameil said…
Just get better!! And I'm very glad all of this happened in a controlled environment where your husband was able to drive you home!
11:51 AM, January 06, 2011

Liz Dwyer said…
Nick,
It is scary. I'm trying to schedule the test now but am getting the run-around over the authorization. It's VERY frustrating.

Remnants,
I hope it does too. I really really do.

Jen,
Well,it's been all week and the pains haven't gone away. BUT they haven't gotten worse. Thank you, God, for that.

Jameil,
I am glad too. I felt so awful I didn't even notice his driving.

Annette,
Trying not to stress is so hard for me. I'm stressed out trying to get the insurance authorization to the appropriate office! UGH!
10:28 AM, January 07, 2011

Anonymous said…
U shud try half marathons, less is more! this is a sign to say chill out take it easy ease off. Everything in moderation. We all love you and we dont want you goin before your time. Also this was a reaction to something you ate rather than a heart problem, youl probably find your heart is in good nick but you must stick to eating the right things, over the holidays you would maybe have eaten some things richer than usual and your body has reacted to this? Eat wiser, better, less crap more nature! Apple cider vinegar,honey,wheatgrass, spirulina, fruits, lots of greens, no animals, etc, etc. You know the score! Lol, you got me preachin again, love and light! x
1:41 AM, January 08, 2011

1969,
ugh, the short version is that last week I had almost every symptom of experiencing cardiac arrest. I have one more test to go through, and then they'll know for sure that I'm OK. Fingers crossed.
2:11 AM, January 15, 2011