Reflections on the Kingdom Day Parade

For the first time in my 12 years living in Los Angeles, I attended this city's Kingdom Day parade in honor of Dr. Martin Luther King, Jr. 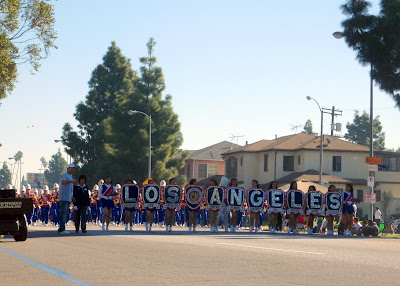 I've never been before because the idea of sitting through a long parade with two small children—and no easily accessible bathroom for them—has never appealed to me. But Mr. O and Mr. T are older now so, I figured we'd drive over to Black Los Angeles' version of Greenwich Village, Leimert Park, and enjoy the celebration. With temperatures in the mid-80s and smiles on almost everyone's faces, we had a wonderful time.

Despite last week's shooting in Arizona, there were tons of politicians out working the crowds. Most were bravely riding along in convertibles, but two actually hit the pavement. Mayor Villaraigosa walked the parade route, and so did Congresswoman Maxine Waters. 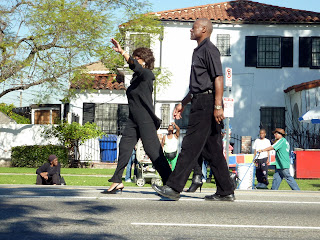 Despite the heat, she strolled the parade route in her heels and suit!

The LAPD got no love when they rolled through with their vintage police cars and youth battalions. The crowd was polite and didn't boo, but there was no cheering, not even when police chief Charlie Beck rolled through. 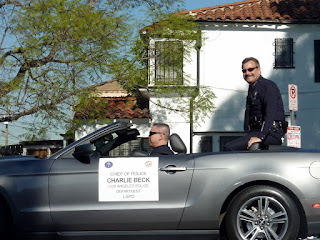 He looks a tad bit uncomfortable, and perhaps he should given last week's shooting of an unarmed, naked black ex-football player and model.

In case you think being an environmentally friendly urban biker is just a thing for white, middle class hipsters... 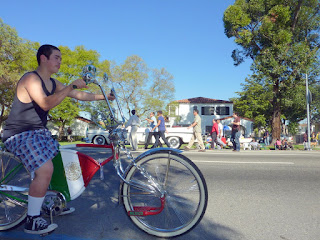 Here in LA, we trick out our bikes in the colors of the Mexican flag, and we also turn them into lowriders. 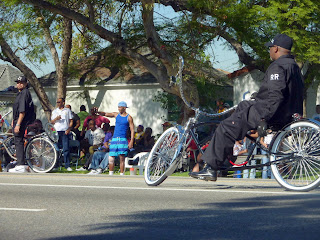 To give you an idea of the diversity of this city, the guys from the Los Angeles Ruff Ryders Bike Club got followed in the parade by the folks from the International Society for Krishna Consciousness. Go figure.

California has the largest Native American population of any state. These ladies looked radiant in their traditional attire. 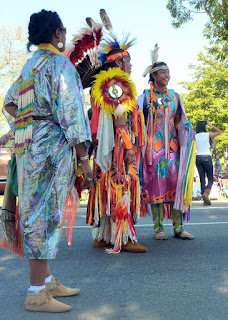 One of my favorite pictures I snapped is of this little girl being held by her father-and she's reaching out to curiously touch the face paint on the gentleman. It was such a wonderful interaction to witness. 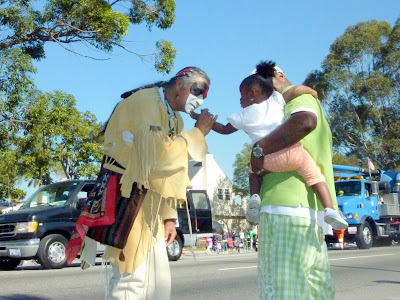 The area's high school bands were out in full force. Washington Prep's band really rocked the house, as did Compton High School's. 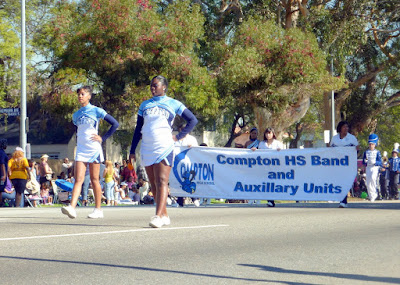 I know those kids were HOT in those uniforms and hosiery, but they kept their heads up and did their thing.

Even though the parade was full of celebration, there were still those reminders that there is still not full racial equality, or social and economic justice in our communities. 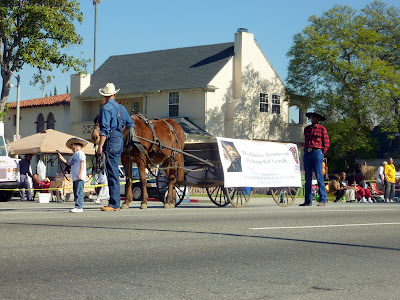 The parade's sponsor, the Congress for Racial Equality (C.O.R.E.) of California had a wagon pulled by a mule. The sign on the side of the wagon read, "They can kill the dreamer, but the dream will never die."

I know some people think African Americans should just "get over" the Reconstruction promise of 40 acres and a mule, but really, some dreams—the dream of equal rights and equal opportunity—never die, and well they shouldn't.

I loved the parade because it was a chance for my sons to proudly cheer thousands of black people who aren't just waiting for the 40 acres and a mule to land in their in-box. Instead, these folks are a part of organizations that are doing something positive in this city and making that dream come to life. One realization I walked away with is that my boys need to see those positive images even more than they presently do...and not just at a parade.

In any case, I hope you had a wonderful King Day holiday. Next year, if you're in Los Angeles, come on out to the parade. It's well worth your time.
Email Post
Labels: arizona shooting bikes Black people california Compton equality hipsters LAPD Leimert Park Los Angeles Martin Luther King Native American parades politicians Reconstruction

Liz Dwyer said…
Annette,
That is VERY cool that your grandfather was one of the founders. What an inspiration to have in your family tree.
7:42 PM, January 18, 2011

Anonymous said…
Thanks for the 'tour' Liz. I found it fascinating. And temps in the mid-80s, damn. I also admire pols and cops who, especially after Arizona, being out in full view. It's commendable and it's the way it should be, otherwise the bad guys win.
4:50 PM, January 19, 2011