The Randomness: Featuring Martin Gore, El DeBarge and a NYC Teacher Shares Her Prostitution Past 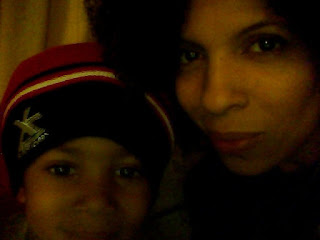 It's Friday night and that means I'm hanging with the Dynamic Duo! Check out Mr. T modeling his new winter hat for y'all. (Yes, it does get that cold in Los Angeles.)

Anyway, here's some of the randomness floating through my world...

1) When a Seven Year Old Plays the Dozens: You hear snaps like, "You're so ashy you belong on the moon!" Wow, that Mr. T can deliver some zingers!

2) No Sugar, Dairy, Caffeine, Wheat or Processed Foods is OVER: My month of eating super healthy officially ended on December 1st. How'd I celebrate? I OD'd on chai -three in one day - and felt horrible afterwards, so I'm committing to eat on the healthy tip 80% of the time. Oh and my friend who asked me to do it with her? She didn't complete the last five days and didn't even tell me till after the month was over. Pfft.

3.5) NaBloPoMo Failure: I didn't blog every day in November either. I'm just effing up left and right, aren't I?

4) Martin Gore is the Bombdizzle: He's DJ'ing in Santa Barbara tonight for charity. No, I couldn't go. Yes, I'm heartbroken. Let's re-live his hotness from a month ago in Santa Ana: 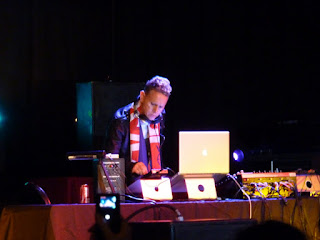 5) Depeche Mode Needs to Go Back to the Studio Already: As much as I love Martin Gore DJ'ing for charity, what I really want is a new Depeche Mode record. And can we have Tim Simenon back as a producer? (yes, I know I'm dreaming.)

6) The King of the Light Skinned Dudes is Totally Channeling Dorian Gray: Seriously, how is it that El DeBarge is 49 years old and looks this good? If you watch this video, I think you'll agree that his youthfulness ain't just makeup and good lighting. Somebody ask him what face cream he uses, mmkay?

Sigh. I will refrain from commenting on El's awesome lips and that "I'm grown and sexy" mustache. I'll just say that the man can SING. Wow, what would a Martin Gore and El DeBarge duet sound like?

7) Discrimination Against Vegetarians!: This week KFC gave a $20K college scholarship to the best fried chicken tweet on Twitter.

8) How Many Boots You Got Up Under That Roll of Fat?: You know it's time for a diet when you're so big you use your rolls of fat as a shoplifting aid. What the heck kind of size fat rolls do you have to have to be able to stick three pairs of boots up under your massive breasts and bra?

9) Most Psycho Education Story of the Week: A New York City art teacher named Melissa Petro might lose her job, and not because of budget cuts. The problem is that Ms. Petro confessed that prior to being a teacher, she used to be a "sex worker"-which is a polite euphemism for prostitute.

She blogged about her exploits for Huffington Post just after being granted tenure, and apparently also rolls up on open mics to brag about having been a stripper in Mexico. School officials say her conduct isn't becoming of a teacher. I guess she forgot that prostitution is illegal and that talking about how she traded sex for money might be a problem since as a teacher, she's an instant role model for her students.

nick said…
A teacher who admits her past as a sex worker is one thing. Quite educational in fact. A teacher who boasts about it, and neglects to explain that the vast majority of prostitutes show symptoms of Post Traumatic Stress Disorder, is another. She is doing no service to her pupils and needs a good talking-to.
1:40 PM, December 05, 2010

Liz Dwyer said…
Nick,
I have a hunch her case will end up in court, and then we'll have to hear even MORE sordid details of her exploits.
9:22 AM, December 06, 2010

Carolyn (Diary of a Sewing Fanatic) said…
I believe you are a bigger El DeBarge fan than I am but I'm off to iTunes to add this little ditty to my iPod! Thanks for pointing the way!!!!
1:27 PM, December 19, 2010