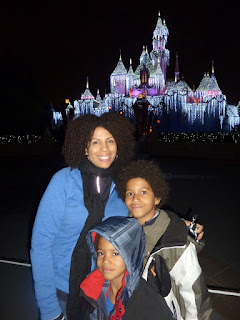 Depeche Mode and Disney together in the same place?

Unlike peanut butter and chocolate, these are two things I'd normally say should steer clear of each other, but after experiencing ElecTRONica this past Saturday at Disney's California Adventure, I've had a change of heart.

My opinion reversal only happened because the Disneyland Resort is made up of two parks right next door to each other: Disneyland and California Adventure. Disney generously hooked my family up with park hopper tickets so we could check out the new holiday happenings at both parks. Little did I know that by the end of the day, the sweet strains of the massive Depeche Mode hit "Enjoy the Silence" would be the icing on the cake of an already fabulous day of fun.

For the first time ever, seven year-old Mr. T was tall enough to ride a "real" rollercoaster, "Screaming California", at California Adventure. That meant I had to ride a record four times with him and his brother, nine year-old Mr. O. 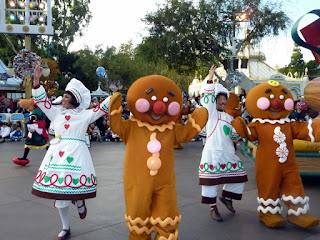 We screamed. I thought I might barf-especially on the upside down loop, and one of the boys dropped the f-bomb while riding. He said he was overcome with fear and didn't realize he'd yelled it. Uh huh.

The Disneyland holiday version of the Main Street Parade rocked. I really appreciate how much more diverse the performers in the parade have become over the past few years...but the dancing gingerbread made us hungry. After the parade, we headed straight to a buy some gingerbread cookies.

I cried when the fireworks went off and it started to "snow" over an iced up and blinged out Sleeping Beauty's castle and "White Christmas" blasted through the park's sound system. Unfortunately, I left my winter coat in the car and was too lazy to go back and get it. I was 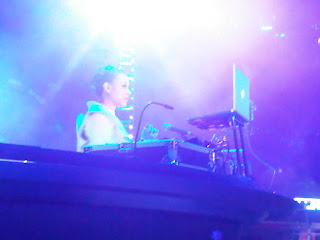 freezing, but it was gorgeous. That said, I cried tears of joy that the snow was only a temporary experience.

So, how does Depeche Mode fit into all this?

Well, I never saw the first TRON movie, and, eh, other than knowing Daft Punk's doing the soundtrack, I haven't been dying to see this one. But, I love to dance and I'm a sucker for a hot electronic track, so I'd heard that the new TRON: Legacy-themed street festival going down on weekend evenings at California Adventure was a must see.

After starting out as a static performance at the park entrance, a team of futuristically-styled dancers boogied over to the Hollywood Pictures Backlot where, ta-da, there was an outdoor dance club, complete with go-go dancers, and a fly female DJ.

We grooved to dance and techno beats and THEN, she dropped a hot remix of Depeche Mode's "Enjoy the Silence".

"Mommy!!! They're playing DEPECHE MODE!!!" My boys went crazy and yeah, I had a proud, Depeche Mode Mother Hen moment. Before I knew it, Mr. T and Mr. O were dancing in the center of a circle of people:

They had so much fun at ElecTRONica that they danced for over an hour. I hope Disney decides to keep the ElecTRONica show going after the movie opens.. It added a real kick of fun to an already fantastic day.
Email Post
Labels: California Adventure Daft Punk Depeche Mode Disney Disneyland ElecTRONica Enjoy the Silence holidays hollywood kids Mr. O Mr. T

Anonymous said…
I'm happy that your sons are now tall enough to ride the roller coaster. I worry about how many times you need to come with them! (Just kidding). In my case, Joshua and Nancy are also fit to ride, yet for the sake of our dental appointment at Raleigh dentists, I bargained about going to theme parks. They had been to Disneyland, but they wanted to try SixFlags. However, I demanded to have our appointment at Raleigh NC dentist
before riding any extreme rides. It is also a good theme park, hope you can try it there. More and more rides for us!
5:54 PM, December 07, 2010

Liz Dwyer said…
Sarah,
Were you worried about their teeth falling out if they did the rollercoasters? I don't get the whole dentist angle and why you linked to it in your comment. Are you a spammer? If not, I guess I lack reading comprehension.

Anonymous said…
Hi! Well, I guess I was not able to give my story in full details. I have to bargain the ride to a dentist appointment so I can finally convince them to have their dental checkup. I hope that could clear that one. =D
8:04 PM, December 12, 2010

I also laugh every time I watch them busting out their little moves. My husband says we need to work on their rhythm!

Sarah,
Ah, got it. I use that sort of bribery, too. I'm taking my youngest to the dentist on Thursday and ugh, thank goodness Christmas is coming up.
12:09 PM, December 13, 2010