Did God and Angels Save Mr. T and His Tooth? 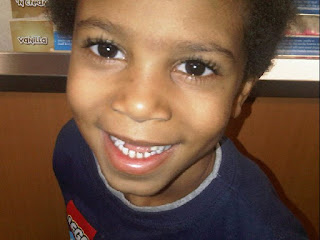 After tonight, I've come to the conclusion that every time Mr. T loses a tooth, it's going to be a major event.

Back in September when he lost his first front tooth, it accidentally ended up in the trash-and I went dumpster diving to recover it. Now that he's lost his second front tooth, I've had a much more spiritual, maybe even supernatural experience.

After leaving work, I picked the boys up from their after school program, and Mr. T proudly showed me his toothless grin. In the school parking lot, he climbed in the car and I popped the trunk to put the boys backpacks inside.

Before I could shut it, my eldest, Mr. O, wanted something out of his backpack, and so Mr. T jumped out of the backseat, began digging in his pocket, and asked, "You wanna see my tooth?"

What parent could possibly say no to his earnest request and the sweetness in his gaze?

He pulled his small tooth out of his front pocket and placed it in my hand. And that's where everything went wrong.

You see, tonight was incredibly windy in Los Angeles, and seconds after T placed the tiny bit of ivory into my hand, the wind whipped it off of my palm.

I screamed in horror as I watched the tooth blow away, and T, realizing what had happened, immediately began to cry, "Now the tooth fairy will never come!"

For the next 45 minutes, the three of us scoured the asphalt parking lot with a flashlight. Every small white pebble seemed like it might be the tooth, but upon closer inspection, our hopes were dashed.

Each time I wanted to throw in the towel and admit that the tooth was gone, I'd see Mr. T's forlorn face. I'd look over and he'd be on his knees, praying to God and asking for his tooth to come back, and so I'd go back to searching.

T sobbed when I finally told him we had to call it quits. He collapsed into a heap on the ground, crying hard. I carried him to the car and promised him that the tooth fairy would still come.

A few minutes later he asked me, "Can we get ice cream at Baskin-Robbins?"

It was almost 7:00, but I figured, "Why not?" and drove the short distance to the ice cream shop. I parked the car and reached into my bag to grab my wallet. For some reason, it came to me to double checked the wallet to make sure my ID and bank card were inside and not in my jacket (which was in the trunk) - and guess what falls out of my wallet?

The tooth. Mr. T's small, pearly white tooth. And, for the second time in less than an hour, I screamed.

Mr. T is convinced that God answered his prayers and returned the tooth to him. Mr. O said angels or the ghost of one of our ancestors brought it back.

They could both be right. After all, I have no rational explanation for how that tooth got in my wallet. I saw the tooth blow away, and I wasn't holding my wallet when it happened. I think I'm still in shock that it reappeared.

However it came back to us, I know where that tooth is now-under T's pillow waiting for the, er, "tooth fairy" to show up with some cash.
Email Post
Labels: angels ghosts God ice cream Mr. O Mr. T prayers school Tooth Fairy

nick said…
Wow, that is really uncanny. There's absolutely no plausible explanation. And now there's no excuse for the tooth fairy not to visit.
4:05 AM, December 11, 2010

Toni Campbell said…
My favorite part of the story is the "ghost of the ancestors"! LOL! I love it! Your ancestors definitely have a soft spot for tears!
3:00 PM, December 11, 2010

Sarah Auerswald said…
Yes, absolutely God and Angels both! I have such a similar story, I can't wait to tell you...

Liz Dwyer said…
Jameil,
The Tooth Fairy hooked him up with $2. I'm still freaked out over the whole thing...and Mr. T keeps saying, "God answered my prayers!" It's very cute.

Nick,
Even though I know there's a whole realm of things we can't see/touch/rationally explain, to have it happen to me in this way with this tooth... I'm still a bit FREAKED!

Toni,
Thank goodness those ancestors have a soft spot for tears! Whew!

Janell said…
Those darn teeth can be so slippery! You are one dedicated mama to search for 45 minutes. I probably would have given up and suggested the ice cream after about 5 minutes.

There's a kid's book called Throw Your Tooth on the Roof that I want to get for my daughter--it's all about what people do with their baby teeth that fall out in all different cultures.
7:53 AM, December 14, 2010