Too Much To Blog About!

Sometimes there are just too many things that I want to tell you about and I can only resort to a list:

1) This is undeniably the most important thing on this list. Tomorrow is the trial for the seven Baha'is unjustly arrested a year ago in Iran and held in Evin prison since then. They face the death penalty for trumped up charges, but really, their crime is being a Baha'i. So if I was living in Iran, I could potentially be arrested just like them. It's not OK and there needs to be MORE outrage about it than there currently is. Here's an article by Cherie Blair, wife of ex UK Prime Minister, Tony Blair. Excellently written. Please read it and spread the word about what's going on with the Baha'is in Iran to your six degrees of separation.

Now, on to the trivial minutae of my life... 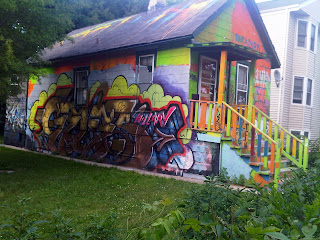 2) If this is your house, and you voluntarily did this to it, you are an idiot.
Do I need to say anything else about this travesty?

3) Skateboard Upside Your Head: Yesterday there was a creepy guy on the train and he stared at me like his eyes were gonna break if he looked away for even one minute. My youngest was going to go whack him with his skateboard, and my eldest kept saying, "I'm gonna go over there and give him a kung fu beat-down if he keeps staring at you!" I explained to them that violence is not the answer. However, I'll admit I'm very pleased with their protectiveness.

4) My Racist Alma Mater: I went to my undergraduate Alma Mater yesterday and took my kids by my freshman year dorm. As I was standing under its historic arches, taking pictures of my sons and telling them, "Here's where you can go to college too," just like LOTS OF WHITE ALUMNI DO ALL THE TIME, the campus police rolled up and severely asked, "Can I help you, Ma'am? You know this is private property?"

Since I went to school there and had lots of interactions with those racists, I know that means, "What do you negroes think you're doing? Don't you know you don't belong here? You're trying to break into this dorm and steal the lounge furniture, aren't you?"

Yeah, some things do not change. This same school required any black campus organization that was hosting an event to pay for extra security, while the kids partying at white fraternities and sororities could drink themselves into a stupor and fall off balconies. Maybe my kids WON'T be going there. Maybe they'll go somewhere they aren't going to get stopped by the campus police all the time and asked to show ID.

5) Kiddie Bikes? Really? If you are an adult male too broke to have a car or afford bus or train fare, and you do not want to walk, do not, I repeat, DO NOT get a kiddie bike and ride it around town. And especially do not be all, "W'sup, girl?" when you are riding by the young ladies. If you want to ride a bike, buy an adult bike, mmkay?

6) I'm Not Crazy: No, I'm not going out on that new glass ledge at the Sears Tower. Oh no. Noooo.

7) Yes, He Does Exist: Just because I don't blog about my husband all the time, or talk about him on Twitter or Facebook, that doesn't mean he doesn't exist. Per his request, I avoid talking about him online as much as possible. He does not want the details of his life all over the internet and can barely handle that mine are out there floating around cyberspace. We're just different like that. But yes, I am married...almost at the 10 year mark.

8) Drive Time: Why do people in the Midwest act like driving an hour to see somebody is a big deal? It's not! Honey child, I might drive an hour in traffic just to go 20 miles, mmkay? - or is this a case of the abnormal becoming normal in my life???

And on that note, I need to somehow brave the drizzle and head out the door!

Tafari said…
My wife doesnt like family business or my business in the streets so I feel you on that.

We celebrate our 10 year anniversary this weekend.

Im surprised you did not mention the Black Voldemort in your count down. LOL!!! http://i32.tinypic.com/vdzpt.png

Jameil said…
that's absolutely a case of you becoming hollywood on us! don't do it! i blog about me and rah's rellationship partly b/c we met online but there are still certain things which are completely off limits. that house is a hot mess as is your alma mater. send your boys to Hampton. there's a great LA alumni network! hint hint! lol. i think i'd try the ledge.
12:38 PM, July 10, 2009

1969 said…
You know I feel you on blogging about my husband all the time.

We celebrate ten years next year so I guess it works for us.

Liz Dwyer said…
Tafari,
Oh congratulations on the 10 year mark! And Black Voldemort!!! What in the world??? I am dying!!!

Anonymous,
Glad you enjoyed it... I didn't know whether to laugh or cry when I saw that house!

Jameil,
You are VERY brave to want to try that ledge. I think it's too cute that you and Rah met online. I love that. Hampton may have to be the place for the boys because even after I told the campus police guy that I was an alumni, he was STILL standing there for the few remaining pictures we took like he had to observe us just to make sure we weren't going to get buckwild on him.

1969,
Yep, those boys are STILL talking this morning about if they see anybody else staring at their mom, they're gonna sock them. And when you wrote awhile back about why you don't, I felt MUCH better about not being the only one not to do that. Go 'ahead on the 10 year mark!
1:12 PM, July 10, 2009

Kim Moldofsky said…
First off, #6 Sears Tower Ledge. It's so cool! Details at http://tinyurl.com/nl4w3b
The first step is the hardest; I encourage you to give it a try.

sippinwineman said…
drive time- not EVERYONE drives 70 to 80 MPH (as I'm sure you do. What? you're from L.A.! Who doesn't?!) But, I've noticed people outside of our areas, drive like they're 20 years past retirement. Imagine. Driving. An. Hour. At. Sixty. Miles. Per. Hour.

nick said…
Re the racist alma mater: as always, still shocking but still thoroughly predictable. Re drive time: in Northern Ireland people take long drives for granted and habitually drive all over the country, both for work and pleasure. A drive of several hours is considered completely normal. Re the Baha'i trial: I do hope they aren't treated too viciously, but religious diversity is still a pretty alien concept in Iran.
12:55 AM, July 11, 2009

I went to a college like that too...always being asked for ID on the way home from a party (like my parents money didn't pay yoru salary!)...and 2...I totally understand your DH's need not to be splattered all over the internet...my SO never gets mentioned on my blog! Daughters, grandkids...but not him...never him...also at his request!

heartinsanfrancisco said…
Is that house in Chicago? L.A.? Or Other?

Sorry about the abominable Keystone Cops on your old campus. We're not yet where we need to be as a society, and that is a very sad loss for all of us.
8:22 PM, July 11, 2009

Jessalyn said…
4. This makes me angry and sad at the same time.

5. Too funny! I saw two grown men on kids' bikes yesterday and wondered the same thing.

Most things in my life in LA are 10-20 minutes away, too. But I've been there so long that bad traffic is nothing to me anymore. It's just the way it is.

Sippinwineman,
Yes, I do drive those speeds, regularly! If I don't, I'd get run over! Plus, my new car makes it VERY hard to drive slowly. 100 mph feels like 60 in it.

Glad to shed some light on what's going on with the Baha'is. The trial did NOT go forward. It got postponed, and no new date has been announced.

Call Fam,
I told him I was an alum and he actually asked me, "So what are you doing here?" Idiot!

Nick,
I would love to take a long drive like that in Northern Ireland. I bet it's absolutely lovely.

Religious diversity is a definitely an alien concept in Iran. I'm glad the trial has been postponed, but the fake charges need to be dropped. :(

Carolyn,
You also have an incognito hubby! Maybe it's a male thing? I wonder if the wives/girlfriends of male bloggers ask to be anonymous. Yeah, the way black students at my old school, particularly the males, were treated was oftentimes quite shameful. So many years later, it hasn't changed.

Heart,
It's in Evanston, just north of Chicago city limits. I still can't believe it's for real.

Tonight I drove by three young black youths sitting on a curb being interrogated by a police officer. They looked about 12-13 years old and the officer's hand was resting by his gun. I know officers stand like that, but I couldn't help but think how I have never seen three white youth in that same situation.

Daniel,
You could still blog about your life... you just need an anonymous blog. I sometimes think about beginning a completely anonymous blog because there are limits to what I can write here. Folks I know, like my mom and dad, read this!

Jessalyn,
Yeah, it makes me angry and sad, too. But I still took them back on Saturday for another walk through another part of campus. It's a beautiful place and it did get about $120K of my money so I figure I'm gonna walk wherever I damn well please with my sons! Thanks for the congrats on the 10 years. Getting there has not always easy but nothing in life ever is!
1:21 AM, July 14, 2009