Saturday in the Summertime 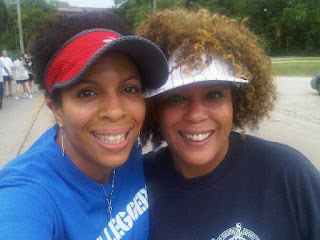 1) Hey, Hey! 5K!!!: I ran a 5K with my sister last night. She is a WAY faster runner than I am and actually enjoys running an eight minute mile. I am not that kind of runner. She calls me the Baywatch runner -- you know, like the slow-mo images of the Baywatch folks running on the beach. I'm not that slow but in comparison, I must seem like a turtle! Here we are post-race!

By the way, if you want to get into running and you live in Los Angeles, my running club, the L.A. Leggers (yeah, I wore the Leggers t-shirt on my run last night) is starting up their training season. It's only $65 for the entire year and you will meet lots of great people and start to actually enjoy running! They had orientation today but don't worry, I missed the orientation last year because I was in Chicago, and was totally fine. The first three or four weeks are like a gradual orientation, SO JOIN ALREADY!!!

2) Prostitutes: I can't believe it but there are prostitutes peddling their wares a few blocks from my parent's house!!! They're very brazen and totally creepy and totally unattractive! Trust me, there are ZERO Pretty Woman types standing out there. (But you knew that already, didn't you?)

My mom keeps calling the police, and the police say they're short staffed and she should leave a message for some task force. She leaves the task force a message and they never call back. I wish there was some way to put the prostitutes in therapy and instead arrest all the men who stop for, ahem, services. Yeah, that "Catch A Predator" guy from Dateline NBC should make a new show called "Catch A John". And then throw these dudes in jail for awhile!

3) TV Detox: Other than a few brief Michael Jackson moments, I haven't watched TV at all since I left Los Angeles on June 30th. But then last night I watched a show on Lifetime called "Drop Dead Diva". The basic premise is that the super cute, super skinny blond model dies but then oh noes, something goes wrong on the other side and she comes back to life as a very plump, insecure, brunette lawyer (the horrors!)-- but she remembers who she used to be in her past life.

It was really funny and original... but then I got to thinking, hmm, what would've happened if the show creators had made her come back to life as a black woman!!!

Scene 1: She runs into her ex-boyfriend and he doesn't even look her way because he's just not that in to black woman.
Scene 2: She overhears her boss saying she thinks about race too much and another colleague calls her an angry black woman.
Scene 3: Everyone tells her it's OK to be fat, because she's black and big boned!

Wowzers, now THAT would make for some GREAT TV!

4) Not Just A Pretty Face: This is why I love Orlando Bloom. Such a kind heart... and, um, yeah... let me dip back into the shallow pool and say the man is HAWT.

5) Next Month I Will Be Mentioning A Certain Band A LOT: In exactly one month I will probably pass out at the Hollywood Bowl because the best band in the whole world will be there in concert. I can't wait to see this performance of "Waiting For The Night". I might cry during this one:


So beautiful. And in case you didn't know... that my friends, is Depeche Mode!

nick said…
Re those prostitutes - if it's anything like Britain, they have plenty of police as customers, which may explain why the police don't do much to deter them....

Damn, I need to start running marathons now...my sis has been begging me to join her...

Liz Dwyer said…
Nick
You are probably right about the police. Gosh, I don't understand why people go to prostitutes. It just seems sooo gross.

Remnants,
Yes, I'm the Baywatch runner! For a second there, I felt bad about being such a slow runner but then I figure why stress myself out so much. By going a bit slower I can run and still have fun. Yeah, it'd be cool if a TV show did actually have my plot? Even so, it was still a good show.

Mimi,
Thanks! Definitely run one. It's so fun. But I've learned that if I ran one with my sister we'd have to train separately because she runs so much faster!

Isn't Orlando just something else! And Depeche is fabulous. There's some good stuff on YouTube but not as much as there used to be since DMs old record company is in a fight with YouTube.
11:58 PM, July 18, 2009

Pretty Woman was such a horrible lie on the realities of prostitution and the whole sordid business. Prostitution does not look pretty, pert and Julia Robertsish. Your poor parents.

Liz Dwyer said…
Ian,
The prostitutes were even WORSE on Saturday night. There was one two doors down and we saw the car do a u-turn in the street and go pick her up. It's weird, hookers in a relatively quiet historical district. I don't get it.

Anyway, maybe after next month I'll be in some newspaper as the first person to clinically OD on Depeche Mode!
8:07 PM, July 20, 2009