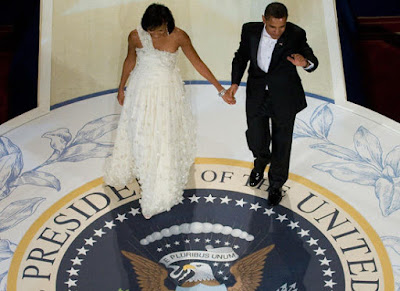 I know I should be asleep but I am just too happy to sleep. Everything seemed to be in slow motion today. Whatever someone said to me, I was smiling. Even our always-salty UPS guy had no effect on me today!

I know that is not the case for everybody though. For the people who thought Michelle Obama's dress was not the bizness to the folks who complained about there being 10 balls... all I can say is, uh... okay.

I would've agreed with their beef if they'd complained about that insane Neighborhood Ball. I mean, come on! Nick Cannon as an MC? And Jay Z's wack performance? The pogo-stick folks jumping to techno? What in the world? Yes, that ball needed a do-over.

But instead, who had to do a do-over? President Obama had to do-over his Oath of Office thanks to Chief Justice John Robert's epic Inauguration Day mess-up and Fox News. When my sister called me this morning and told me that Chris Wallace from Fox News had been speculating on air that Obama's Presidency wasn't legit, she said it right: "Time to put away childish things!" I mean, really? Not legit? Come on!

That's cool though. President Obama can say that oath every day if that'll make the folks at Fox News feel better about having him in office. Never mind that the 20th Amendment to the Constitution says that you become President at noon, oath or no oath. Obama could've been chillaxin' on Venice Beach and he STILL would've been President.

Really, Fox's yapping about how they weren't sure if President Obama was actually the President was just weird. Are they really going to spend four years like this? Does our nation really need anymore of that from anybody? I think they need to relax and listen to a little of this:


Yeah, don't miss that train! Get on board! I would like to have four years of unity. Heck, I'll take four minutes of unity! I'm done with the divisions of liberal/vs/conservative, atheist/vs/non-atheist and golden Oreos/vs/chocolate Oreos!

We all bleed the same blood in the end and all Oreos taste fabulous, so come on! Bury the hatchet. Hold the man accountable to his promises but enough with lying about the cost of Obama's Inauguration and enough with speculation and twisting the truth.

nyc/caribbean ragazza said…
Oh the Gap Band bringing some funk to my Thursday.

Wow some people at Fox are really stupid. A quick Google search would have told them Obama became the President at Noon.

Later for the haters.

Anonymous said…
The people at Fox are psychotic. That's the only explanation that makes sense to me.
3:57 AM, January 22, 2009

Anonymous said…
That white ball gown is just fabulous. Trouble is the next time she goes to a ball, she'll be expected to wear something different. I say, ignore convention, Michelle, give it a run for its money!
6:03 AM, January 22, 2009

Remnants of U said…
Fox News what a joke. Michelle looked great both during the day & that night in her ball gown.

Liz Dwyer said…
NYC/CR,
Yes, later for the haters! They need to get a life and stop being so silly. And don't you just LOVE the Gap Band! Gap Band + Venice Beach = LOVE!

Citizen,
It is psychotic. They're so blinded by an ideology that they can't even just report the truth.

Nick
I thought she really pulled that dress off. It was gorgeous on her. I hope she ignores convention too and keeps wearing what she wants. She's got a great sense of style.

1969,
Girl... I thought homie was hot in that hat and leather too! Sigh, sometimes I just gotta go there! But for real, they could've just played this video and it would've been better than half that Neighborhood Ball!

David,
Golden Oreos work because then no one knows you've been eating them! I always know when my kids have been eating regular Oreos.

heartinsanfrancisco said…
Nothing pithy to say here. I"m smiling, too, and full of hope for all of us who share this fragile world for the first time in ages.

Maybe people should be concerned that Justice Roberts is not really the Chief Justice because yes, Obama's term began at noon, regardless. The oath, mangled or not, was just icing on the cake. And a very nice cake it is, too.
10:12 AM, January 22, 2009

I don't know. I wish I had something more intelligent to say.

But every time I hear the haters, I just think, 'yeah'

Not, yeah you're right.

Liz Dwyer said…
Heart,
I am loving this cake. It's the sweetest I've ever had.

Claudia,
I always wish I had something more intelligent to say but I don't. You are doing just fine though.

sippinwineman said…
Even w/o the oath, at 12 noon he was pres. To remove all doubt, he got "do overs". It ALL good, baby.

I didn't hear it but in my own head I kept singing, "one Nation Under A Groove" all weekend.

Faith at Acts of Faith Blog said…
I'm still in an inaugural haze and have a major cold right now but I am so glad I went to DC. I'm still here and am flying back Saturday. I need a vacation!
3:39 PM, January 22, 2009

Unknown said…
Now THAT's the way to start the morning! Caint miss that train baby.
Thanks for taking me back Liz.

Sundry said…
I am so with you. I am so hopey! I don't care how people celebrate, just celebrate! Look stupid and uncool and uncynical, it's worth it. And I'm really excited that Michelle's giving new designers a chance and mixing it up with off the rack clothes.
7:39 AM, January 23, 2009

Liz Dwyer said…
Sippinwineman,
Well, technically we don't bleed the same blood because I'm O- and I know some folks are A, AB, B or O+! :) I've been thinking of that tune too. Love it.

Faith,
Wow, still there! Fabulous. Eat some garlic and it'll clear your cold right up!

Noel,
LOVE IT! I'll have to drive by Virgil and blast it in your honor! Those kids at King probably can't hang with that! :)

Sundry,
I love her choices of designers. I know there are some black folks who are annoyed that she didn't pick black designers but I'm like, really now, get over it! She looked fab!!
11:02 PM, January 23, 2009