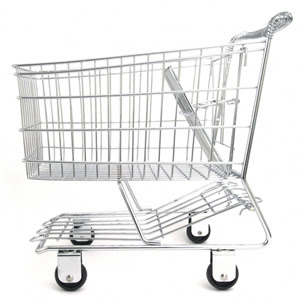 When I went to pick my seven year-old up from school today, I passed another mother laboriously pushing three kids in a shopping cart. The children were wrapped in blankets because it's a pretty cold and cloudy day here in Los Angeles. But they were still full of giggles and laughter, like they were having fun riding around.

And really, what kids don't have fun riding in a shopping cart?

However, their mother looked like she wasn't having so much fun. She looked exhausted, like she could keel over right then and there. She looked like the forthcoming tax rebate check might only put a small dent in her stress level.

I'm a pretty fast walker, even carrying a four year-old around on my shoulders. And before I knew it, I was almost to the school and she was several blocks behind me. I wondered for a moment how she pushes all those kids up the hills in this neighborhood. I know I can't push my two sons up our hill if they're both riding in a stroller, so I can't even imagine three kids in a shopping cart.

I left these thoughts behind as I popped into the school, got my son, stopped by the library and said hi to the librarian. Ten minutes later I walked outside and saw the mother and the cart full of kids slowly walking away from the school.

A young boy bounded along next to her. He was probably a third or fourth grader. Certainly old enough to be embarrassed by the sight of his mother pushing kids in a shopping cart.

Instead though, he was clearly trying to take over cart pushing duties for her. She relinquished her grip on the cart for a moment but he wasn't quite strong enough to push a cart full of kids for too long. She gently scolded him in Spanish and motioned him to scoot over.

They began pushing the cart together and she leaned over and gently kissed his brow.

As I watched the pair pushing the boisterous trio of children in the cart, my own sons decided to engage in an impromptu footrace. They began running at breakneck speed toward a tree up the street. I quickened my pace to catch them, passing the mother and her family as I lengthened my stride. I said hello and gave her a quick smile, which she politely returned.

When I finally caught up to my kids, instead of hearing bragging about who'd won the footrace, my four year-old blurted out, "How come we don't get to ride in a shopping cart?"

My eldest concurred, "Yeah, you need to get us a cool shopping cart too."

"You don't really want to ride in a shopping cart," I told them.

"If you loved us, you'd push us in a shopping cart too."

And that is true. Love is without complaint pushing your kids in a shopping cart. And love is a young son trying to help his mother.

One of these days my sons will understand that mothers only push their kids in shopping carts when they don't have the money to afford fancy double strollers. And when they do, I wonder if they'll remember this day.
Email Post
Labels: kids Los Angeles mothers Poverty

none said…
My girls 7 and 8 begged to go ride in the shopping cart the other day.

They are tiny but I wouldn't allow it. I told them that if one of their school friends saw them it would be really embarassing.
9:04 PM, February 19, 2008

Anonymous said…
This post made me cry - cause every day mother's show their love in little ways and it's nice to know that someone out there notices. It's also nice to know everyone out there is not so judgmental that all they can do is talk about how ghetto that mom is for using a shopping cart. Good Job!!!
8:34 AM, February 20, 2008

Lisa Johnson said…
What a beautiful post! It's so true that moms (and dads too!)do whatever they have to do to take care of their kids. And that she returned your smile said it all too. Even though she was tired, she was still full of grace.
9:32 AM, February 20, 2008

Liz Dwyer said…
1969,
You are a writer too...and a great people manager. You have so many opportunities to observe such a wide range of people, I don't know how you get anything done all day. I'm always struck by how the seemingly mundane can be so interesting if I start to ask why.

Houseonahill,
I know. I haven't been able to stop thinking about it. And I think about all the parents in this city who are holding it together for their kids. It sure isn't easy.

NYC/CR,
Last night I kept thinking about how much I want for her children to do well in school and grow up to be incredibly successful. I hope the hardships of life right now for them become a thing of the past. And I hope that as her children get older they don't become immobilized by bitterness when they see the Silver Lake hipsters zooming by in their Priuses and Jettas.

Cyndee,
Mother's do show their love in amazing ways, don't they. And the fact that I didn't even think about her using a shopping cart like that probably means I'm more than a little ghetto myself! I thought, "Wow, what a good idea!"

Anali,
And I could see how some moms would lose their temper and yell at the kids to stop making so much noise and quit moving around in the shopping cart. But she didn't. She was definitely full of grace.
9:54 AM, February 20, 2008

Haute in LA said…
Touching story. Perception is everything in some situations. I love that you were observant and not judgmental in this situation. We don't all possess that quality.
11:26 AM, February 20, 2008

heartinsanfrancisco said…
You made me see her and her children and care about them, Liz.

I believe that your boys will remember the love they received even if they never think of that other mom again. And because they have you to guide them, they will realize that love comes in many forms and is worth any sacrifice, and they will grow up to be the very best of men.
2:56 PM, February 20, 2008

Liz Dwyer said…
Jameil,
I'm amazed that she does that every day. I'm tired for her.

Haute in LA,
Perception is everything, isn't it? But I admire her dedication and that she actually goes to pick up her son. I think there's plenty of moms that would think a 3rd or 4th grader is old enough to walk home by himself. And I tend to be a little judgemental about stuff like that.

Heart,
It is my truly my deepest wish that my sons grow up to be such shining examples of compassion and love for their fellow man. That would make me happier than anything.
8:03 PM, February 20, 2008

Anonymous said…
Los Angelista, this post really made me think. It was so moving and beautifully written.

It's hard to articulate what I want to say. My kids grew up with the best strollers, no shopping carts, etc and I think in a way they were missing out on something that this family clearly has in spite of their difficulties. The older boy can really SEE his mother's struggles and wants to help. My own kids have a very different attitude and I can't help thinking that is linked to things being just a tad too easy....
8:15 AM, February 22, 2008

Anonymous said…
I loved this post ... I am a newly divorced mummy of four -- 6, 5, 3 and four months. And yes ... they all have the same father if it make a difference to you oh so judgy other-people's-business-mongers. I can't begin to describe the travails of moving our five bodies in some semblance of unified order -- much less maintaining our dignity and grace. The simplest of errands or excursions can become a logistical nightmare and/or hilarious romp. I am so deliriously thankful for the invention of the wheel. I often wonder what lies beyond the bewildered stares of those we encounter. I can only hope their thoughts are as gentle and insightful as yours.
9:23 AM, February 23, 2008