I can't tell you how excited I was to go and vote this morning. 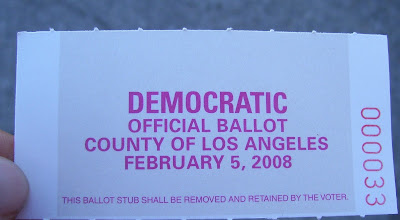 The workers at the polling place were making me a little nervous because while I was voting, they kept talking about all of problems their anticipating because they're expecting a record turnout here in Los Angeles. I sure hope people turn out in this city, not just so they can vote for a presidential candidate, but so they can shoot down some of the nonsensical propositions that are on our ballot. If you don't live in California, trust me, the proposition thing is a good idea gone awry and it will confuse you to no end if you move here. Not sure what a proposition is? Read this explanation.

You think picking a presidential candidate is hard? Try deciphering this year's crop.

And so I went early this morning and voted. I was voter number 33 at my local polling place. I've voted in every single election since I turned eighteen. I'll say it again, I don't think I've ever been more excited to vote than I was today. As Maria Shriver said on Sunday, "This election is about a moment!" I am definitely feeling it!

So whoever you believe in and support, go vote. Hillary Clinton? Barack Obama, McCain? Romney? Whoever it is you're for, if your primary is today, go make your choice and let your voice be heard!
Email Post
Labels: Barack Obama california hillary clinton hope Los Angeles Politics

Liz Dwyer said…
1969
Change is a good thing. I think I need to boycott all media till tomorrow morning though because I just can't take the suspense!
11:17 AM, February 05, 2008

In CT, we can't vote in the primaries if we're unenrolled. Oh well.

Please take a moment to peek at my photos from last night's Obama rally in Hartford. Amazing crowd.

I see some of the photos and footage from some of these rallies and wish I had the chance to go to some of them. I would probably be a crying wreck though. I cry even when I watch some of it on YouTube. It's just really moving to see.

And I wish more states let non-partisans vote in primaries. I think everybody should have a voice in them.
12:38 PM, February 05, 2008

Anonymous said…
It felt great to vote first thing this morning! I'm not going to watch for early returns - I'm watching Idol and I'll wait until the polls close to see if voting with my heart helped the cause.
2:29 PM, February 05, 2008

heartinsanfrancisco said…
We just got back from our polling place, which was not at all crowded. I hope it improves.

It took me awhile to figure out what the propositions meant and to prepare a cheat sheet so we wouldn't have to go through the confusing process again in the booth.

Liz Dwyer said…
Jay,
Do y'all have this much fun in Canada with the elections? There are a lot of reports of polling place shenanigans here in LA. Some people are saying we're about to be the next Florida!

Claudia,
I love voting because I think how many ancestors I've had who didn't get to. Now that I have the privilege, how could I fail to show up?

Maia,
How exciting! I felt so great after I voted and I wore my little "I Voted" sticker all day long.

Jali,
Yeah, watching the returns is annoying because then it's just listening to hours and hours of pundits speculating. I can wake in the morning and find out what went down. Besides, who knows if we'll even here the results in Cali till tomorrow night.

Heart,
Maybe there will be a huge turnout after work? I hope that improves too. My husband just went to vote and he said there was no one there. When I went, there were three people in there voting and two walking in to vote as I left.

A bigger problem was that I got asked for ID, which I found out about an hour ago was illegal, and there's this issue here in LA County, folks have to mark the ballot in a certain way and if they don't, it's invalid, so the city atty. is getting involved.

A cheat sheet is definitely needed. The casino propositions were the easiest for me because I'm not a fan of gambling at all.
5:41 PM, February 05, 2008

nyc/caribbean ragazza said…
My polling place (in someone nice crib) was crowded.

I agree with you about the propositions. It's out of control here. It must be great money for the lobbyists and media firms.
9:08 PM, February 05, 2008

Liz Dwyer said…
NYC/CR,
A polling place in a house? That's really cool but what do they do, lock everything movable down? I can't believe these propositions passed. Now they'll probably be caught up in court challenges or found illegal. Measure S will let the city tax us for technologies not even invented yet and for every text message sent. UGH!

Jameil,
Yes, propositions are on every single ballot. If you move out here, don't like something in California and get enough signatures, you can get a proposition on the ballot. And why are folks still voting for Edwards and Kucinich when they are out of the race? In some states, Edwards got 10% of the votes. Folks have no sense!

NancyPearlWannabe,
Welcome! (love your blog btw). It was sort of cool to have so many states voting yesterday. I wonder if we'll ever just have a totally national primary day?
7:02 AM, February 06, 2008

Liz Dwyer said…
Ian,
People who don't vote drive me crazy! The worst are the ones that say, "Oh, I just ran out of time and I'm fine with whoever wins anyway." They'll be the main people complaining two years down the road.
9:54 AM, February 06, 2008

Jen said…
I'm so with you on the responsibilities of voting. I just wish our Presidential electoral process was more straightforward. I don't like the idea of the Democratic candidate coming from the Super Delegates... And I'd love to do away with the Electoral College. Okay, off my soapbox now!
10:17 AM, February 06, 2008

Liz Dwyer said…
Jen,
I totally agree. This is the first year I've heard about these super delegates. So basically, the will of the people can be thwarted by back room deals with super delegates. I also think the electoral college needs to go. Elections should be decided by the people,not by those folks.
10:23 AM, February 06, 2008

storyteller said…
Yes! I not only voted, but posted about it too ... providing links to voter information ... encouraging others to go vote as well. As for the person who asked you about your vote ... shame on her! I wear my "I voted" button proudly too, but it's nobody's business who I cast my vote for ... especially in Starbucks! I like the changes and hope you've resolved the issues you had initially.
Hugs and blessings,
2:46 PM, February 07, 2008

Liz Dwyer said…
Storyteller,
Glad you like the changes. I do too. I think it's great that you put so much info out there about voting. It's weird to now hear all this stuff about super delegates. It makes me feel a little like the voice of the people is ultimately not going to be heard.
12:26 AM, February 08, 2008

storyteller said…
We have the Electoral College today because the framers of the Constitution didn't trust the general popular whole-heartedly. Since that time, "power-brokers" have modified the rules to keep an upper hand, but then Jesse Jackson managed to get the "winner take all" rule changed for Democratic Primaries (something the Republicans have yet to change). The interesting thing is how TRANSPARENT everything is becoming with exposure from the media ... and hopefully future changes will be in the best interests of all concerned. The fact that we HAVE such information readily available in the media and on the Internet serves to keep folks more honest. Talking about it begets change and hopefully progress.
Hugs and blessings,
8:13 AM, February 08, 2008

Liz Dwyer said…
Storyteller,
Thanks for breaking it down for me. You're right. Things are MUCH more transparent now than they were years ago and that is a good thing. I think that's why Howard Dean has been quoted as saying he doesn't want a brokered convention. If people see that happen, the system will be fractured. I hope it does happen so something new can be created from the mess we have now.
10:00 AM, February 08, 2008