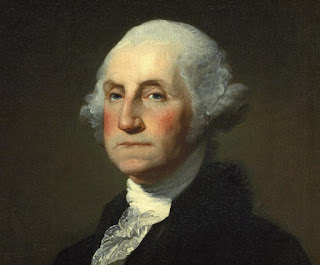 How was your President's Day?

I'm sure you spent all day curled up on your sofa reading the inspiring biographies of Abe Lincoln and FDR.

As for moi, I had a $10 Starbucks gift card I was going to mail off to President Bush just so he'd know how much we all appreciate everything he's doing for this country. I don't know where I put it though and I'm out of stamps anyway. Gosh, I feel so guilty, especially after he's gone and saved Africa over the past couple of days.

But I know Bush likes us to shop, so I figured the least I could do was head out to Sally's Beauty Supply and to Trader Joe's in order to do my patriotic duty. For extra entertainment, I took my seven year-old along with me.

After five minutes in Sally's, he was bored and asking if we could leave because there was no "boy" stuff in there. I started telling him that hair conditioner isn't just for girls and how lots of men get their nails done, color their hair and take care of their skin. He didn't believe me so I began explaining how it's only been in the past couple hundred years that men stopped wearing makeup and wigs.

I pulled a dollar bill out and showed him George Washington's hair. "See that?" I said. "That's the first President of the United States. His name is George Washington and that is NOT his hair. It's all a wig!"

My son's mouth fell open. "You mean George Bush has a hair weave?"

Time to explain the difference between 1) George Bush and George Washington and 2) a wig and a hair weave, but it all went over his head. Two minutes later he was still saying to himself, "I can't believe George Bush has a weave."

I can't wait till he goes to school and tells his teacher that one.

Our next patriotic shopping stop was our local Trader Joe's. I know my neighborhood is the epicenter of uber-hipness but gosh, can folks give up the ironic t-shirts and silver ballet flats for even one day out of the year?

I won't even get into the young lady wearing a floral baby doll dress, no bra and cowboy boots except to say that my son took one look at her and said, "Hmm. I think she should have made some different choices when she got dressed this morning. Don't you think so, Mommy?"

Yes, Mommy does think so. I also think folks should leave the shirts with the "fcuk" label on it at home. I was in the checkout line contemplating how wrong it is that a teeny tiny carton of NINE strawberries is $3.99 when I suddenly heard my son sounding out, "/f/ /k/ /u/ /k/. Mommy, whats fcuk spell?"

Yeah, thanks random hipster. I had a real good time trying to explain that one, you f*&^ing a$$^@#^.

Ah, that was therapeutic. Let's just hope my son doesn't yet know how to operate the internet well enough to read my blog. I don't think I'm ready to explain what "*&^" stands for.
Email Post
Labels: holidays kids Los Angeles Presidency Trader Joe's

Ian Lidster said…
So, happy Presidents' Day. We don't have a Prime Ministers' Day in Canada. Just as well, since most are best forgotten. Well, as opposed to Washington, at least George W has his own teeth -- doesn't he?
5:46 AM, February 19, 2008

Anonymous said…
The interesting question is why men STOPPED wearing wigs, make-up, tights and all that girlie stuff. Did someone come along and promote the rugged masculine no-nonsense image? I have no idea. Must do some research. Anyway, I'm glad that rigid stereotype is going out of fashion again and men are more free to doll themselves up if they want.
7:19 AM, February 19, 2008

I have no idea about the teeth. I hope he has his own teeth!

NYC/CR,
Yes, they do try way too hard. The effort to be "different" becomes boring.

Nick,
It's because of the industrial revolution. It wasn't practical to wear lace and heels if you were working in a factory. Then, Beau Brummel started the black suit thing back in the Regency era so that put all the cool lacy outfits out of business.

You make me remember how I always felt bad for the guys in high school with bad skin because they weren't free to cover it up with a bit of makeup like girls were.
7:25 AM, February 19, 2008

none said…
I hate those trendy shirts with the thinly disguised profanity. I've been asked about them by my daughters as well.
8:35 AM, February 19, 2008

Brianna said…
"George Bush has a hair weave." Hilarious. You need to put that out a t-shirt.

And leave it to a mommy to educate while in the Beauty Supply Store. LOL

Liz Dwyer said…
Hammer,
I can't stand them. And I think it's sort of selfish to expose other people's kids to them. But that's the way life in this country is.

Brianna,
My sons ate all but two of those strawberries up last night. They were sneaking into the fridge and snacking on them. My youngest polished off the last two this morning. Little greedy things! Id didn't even get one!

Fruit prices are out of control. I had to draw the line at $3.99 for the blueberries. I really wanted them though!

1969,
I just don't get why folks think they seem so cool and ironic in a fcuk t-shirt. No, you look like a moron trying to be ironic.

Moms are my idols too!

Jameil,
Yes, haven't you heard? He gets his weave done by Taronisha in Southeast! He's been trying to get Condoleeza to go over there too but she said it was too "hood" for her over there.

Sundry said…
You're cruising to get upped to NC-17, aren't you? I keep forgetting to tell you, I ran that rater on my blog, and it gave me a PG for using the word "crack."

I thought, hmm, did I write something like George Bush must be on crack somewhere, because I'm sure I've said it often enough.

No. It was in the caption for a photo of a bottle of super fine olive oil. As in, we're going to crack this baby open.

Liz Dwyer said…
Sundry,
Ha! Olive oil! LOL! That's really funny. I have to find that rating widget again. I forgot to save it when I changed my blog. I probably am up to NC-17 by now.

Jen said…
I've been out of blogland the past couple of days. This CRACKED me up! Too funny. Please report on teacher reaction to Bush's hair weave.

The Fitness Diva said…
Too funny! And your son is quite the observant, curious one! I hope you don't run out of good answers too soon. He's definitely going to challenge you!
6:40 AM, February 21, 2008