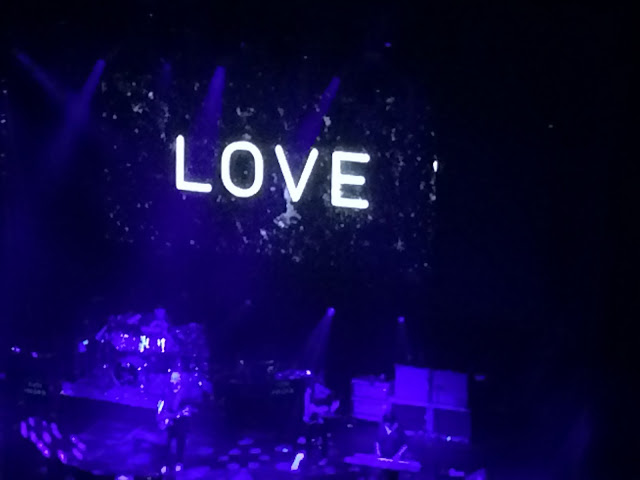 Back in the Dark Ages there was a radio station in Chicago called WBMX, and on weekend evenings it featured the Hot Mix 5, the absolute best house music DJs on the planet. Every once in awhile on their "Saturday Night Live Ain't No Jive Dance Party" they'd pull some techno, Italian disco, alternative, or new wave music into a set. And that is how I first heard tracks by an atmospheric band from Manchester, England: New Order.

I never saw them live until Saturday night at the Shrine Auditorium in Los Angeles. I went with my two sons—ages 15 and 12. They've grown up laughing with me over the sound of croaking frogs in the song "The Perfect Kiss" and heard me sing the chilling lyrics of "Round and Round": I don't care about what you do, cos if you mess with me, I'll get rid of you.

We ran into some rather rude people while waiting for the elevator in the parking garage. They were all, "Omigawd, you poor kids! Your mom made you come to this?" They didn't believe my boys when they said they were excited to see the show. It was bizarre. In any case, here's what I learned during the concert.

1) New Order is really a band of vampires: The stage was frequently dark or shadowed—no spotlights on the group—while the space above it was lit up by brilliantly colored lights that moved in time with the beat, seemingly urging us to dance alongside. No projections of the band members on screens either, which, upon reflection, is a sharp contrast to our modern selfie culture. I wondered for a few hours after the show if they were trying to hide the fact that they're Baby Boomers. But it only takes Siri a few seconds to reveal the band members' ages. Therefore, I've decided that the only conclusion can be that they're vampires and were trying to hide that fact from the audience. (I kid, I kid!)

2) Brandon Sumners sounds pretty amazing live: It's tempting to wonder if if he's lip synching or if he has a backing track, yet Sumners had that undefinable "I'm singing live and just sound this good" quality to his voice that truly great performers have. In our world of autotune, it's something that seems increasingly rare. 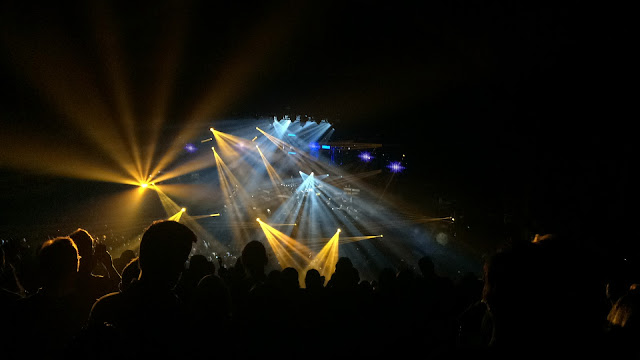 3) Some people will watch a WHOLE New Order show through their smartphone screen: I am not averse to snapping a few pictures, or filming a few snippets of a concert. But filming an entire 18-song set? That's what the woman next to me did. And the guy she was with? He filmed the whole thing, too. I hope they weren't on a date because if they were, WORST date ever.


Here's a tip: If you want to watch thru a screen, save your money and wait for a concert DVD to come out.

4) Angelenos are still too cool for school: Who comes to a New Order concert and sits the entire time? And who gets mad because I'm out of my seat dancing? That said, most folks warmed up by the last three songs of the main set ("The Perfect Kiss," True Faith," and "Temptation"). The venue went pretty crazy during the encore of two Joy Division songs, ("Atmosphere," "Love Will Tear Us Apart") and the stomping bass of "Blue Monday" as a finale. 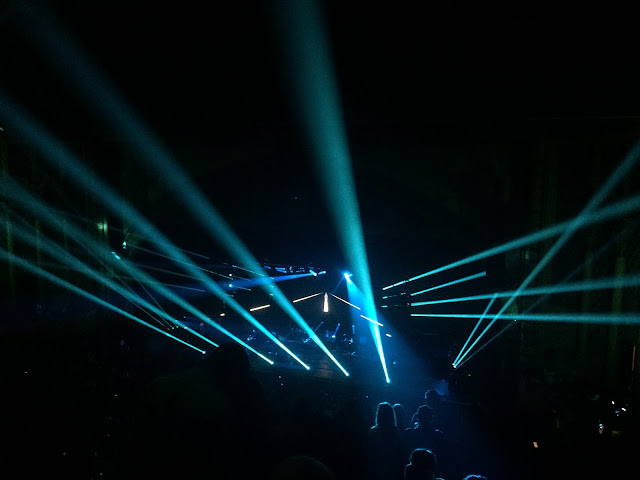 5) "True Faith" is still my favorite New Order song: My love for Depeche Mode knows no equal, but I as a teenager I listened to New Order much more because my mom wasn't letting any Depeche Mode records into the house. Blame Martin Gore's penchant for leather. Or the "that music is depressing" factor. However I somehow acquired a friend's cassette tape of Substance, New Order's "best of" album which was released in 1987. And that's when I fell in love with "True Faith."

I listened to it nonstop. I rewrote the lyrics in notebooks, and reimagined it into bad poetry. Over the years since I've worked my way through the band's entire discography, all the way from their inception as Joy Division in the late 1970s, to their transition into New Order, to band members' side projects such as Electronic, and their latest album released last fall. That's a lot of music, but "True Faith" is still the essential New Order song for me.

Check out the performance, courtesy of one of those folks who filmed at the show. The lights in this performance are spectacular. At the show during the chorus at about the 2:13 mark I had tears rolling down my cheeks. Anyone else who had a childhood lost replaced by fear will understand.

Parsimonious Décor Darling said…
I didn't know they were even touring...what a tribute to Ian to do the Joy Division songs. I am so jealous!!! It looks like a wonderful time, they are one of my favorites, too.
12:32 PM, March 28, 2016