5 Awesome Things About Depeche Mode Being on Tour 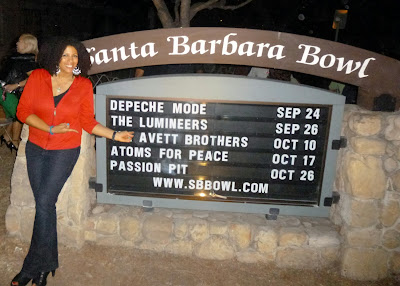 It's the equivalent of Christmas for Depeche Mode fans because the Best Band in the World is on tour. On Tuesday night I road tripped up the coast to Santa Barbara to see them and I got to thinking about how there are a great many awesome things about Depeche Mode being on tour besides the chance to hear 13 albums worth of great music. For example:

1. Depeche Mode tweets. If the band doesn't go on tour, I can't write things like:

See, I got so excited I couldn't even spell "on." Also, I don't really need a reason to bust out my #MartinGoreIsTheBombdizzle hashtag, but Depeche Mode being on tour does provide a nice excuse.

2. Road trips with your BFF! You can't go see a band like Depeche Mode with just anybody. You gotta go with folks you adore and love, like your best friends. And then you do a sing-a-long while Depeche Mode sings "Never Let Me Down."

3. Depeche Mode Fans:
After the show I found myself thinking about how although I love Depeche Mode dearly, being at the shows gives me a chance to hug all the wonderful people I know from online message boards and groups. And there there are those folks who you have never met before but you end up having a nice conversation and hearing about their electronic music and exorcism side project. 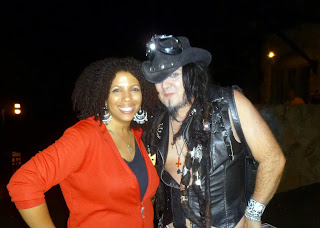 I don't know if I have anything else in common with this dude other than being human and loving Depeche Mode, and that's A-OK.

4. Martin Gore singing "But Not Tonight."
This song first appeared on the soundtrack for the 1986 film Modern Girls, which could pretty much be the Los Angeles version of Sex in the City. Although it is much-beloved by fans, Depeche Mode has never played it live till this tour. Here's footage captured by the amazing Miss Housegirl.

5. The element of surprise. Even though I've seen Depeche Mode plenty of times, they never cease to surprise me. Martin Gore sang four songs in Santa Barbara instead of his usual three. They hug each other. Or eat bananas on stage. And now I'm about to walk out the door to head to Staples Center to see Depeche Mode again. And I'm taking my sons. They don't know they're going to the show. Surprise, surprise!
Email Post
Labels: #MartinGoreIsTheBombdizzle Depeche Mode Los Angeles martin gore Santa Barbara