In Honor of My First Breast Cancerversary, Please Do a Self-Exam 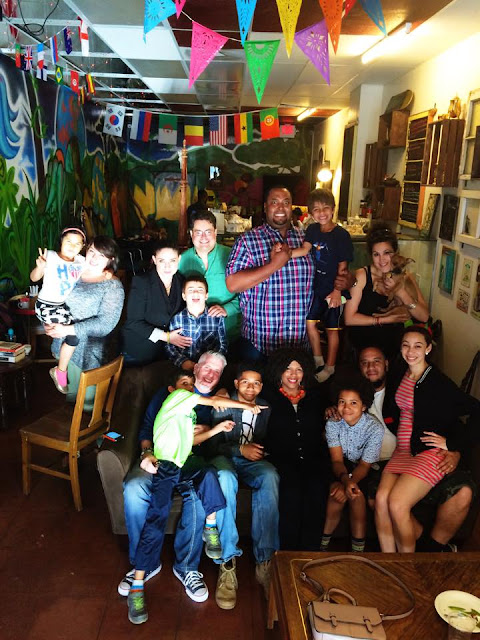 That picture—that's just some of my tribe, my family here in Los Angeles, not by blood but by spirit. They're the folks that I celebrated with last year after finishing treatment for breast cancer. Yesterday was my first anniversary—my cancerversary—of the end of that grueling, often terrifying experience. How appropriate, given that it was Easter. A day of resurrection.

As far as anniversaries go, it was somewhat uneventful. I didn't have a blow-out bash to celebrate being alive another year—mostly cos, you know, it was Easter. Jesus takes precedence.

But also, the celebration has been being alive every day. So I went to the gym for two hours. I ran four miles cos I'm running a 5K race on April 9. It'll be my first race since I being diagnosed with breast cancer. I lifted weights like a beast. Okay, maybe the amount of weight I lifted doesn't make me the female equivalent of The Rock, but I still marveled over the reality that a year ago, I couldn't run around the block.

People like to ask if I'm cured and if I'm going to be okay for forever and ever. There are no guarantees that cancer won't come back. I've had about 10 migraines over the past three weeks. I had to go for a brain MRI in case cancer had come back and attacked my brain. Fortunately it seems I'm just a normal migraine sufferer. Real Talk: I thought I was going to have a nervous breakdown last week over the prospect of having cancer come back. So no thank you, I don't want to think about recurrence rates and how shitty they are for folks who've had triple negative breast cancer, which is what I had. I will get to Cancerversary Nirvana: Five years without it coming back. The power of positive thinking, AMIRITE?

Warning: Graphic Descriptions Ahead. If Don't Want to Read, Go Ahead and Close This Page.
I'm in pain everyday. I can't sleep on my right side. Thanks to radiation, my breast is still a very tanned hard grapefruit. Not as burned as it used to be. I mean, the charred factor was out of control in the picture below, and I still had two weeks of radiation to go.


It's not that burned anymore, but I look like I got a decent suntan on one side of my chest, and not the other. My breast swells with fluid during the day and gets super uncomfortable. The spot where I got lymph nodes removed still hurts. My breasts are lopsided. Sometimes when I look in a mirror I laugh at myself. Other times I feel so unattractive with my lopsided chest. Unattractive, but alive.

A doctor asked me in December during a checkup if I wanted to consider plastic surgery to fix things. She understood the side-eye I gave her immediately. I'm still experiencing PTSD symptoms when I merely DRIVE BY the building I had chemotherapy in, so nah, I'm good.

Is this all TMI for you? Well, I live this every day. One in eight women in the United States will be diagnosed with breast cancer. Eff your pink ribbons in October, this is the reality. People need to know what women who are being treated for breast cancer are going thru—and that it's not all ponies and rainbows for us when treatment is over.

Six rounds of chemotherapy, a lumpectomy, and seven weeks of daily radiation treatments saved my life, but none of it was a walk in the park.

The chemotherapy I had saved my life, but it was straight up poison.
I still have numbness in two of my fingers from all that stuff that got pumped into my body. I'm a journalist. Go ahead, ask me how fun it is to type all day when I can't really feel two of my fingers.

But I'm alive. And I want you to be alive, too.

Will you do something for me in honor of my cancerversary? If you are a woman, promise that you will do regular self exams on your breasts. Click here to find out how. Promise that you will get a mammogram as soon as you can. Harass your doctor about it.

If you are a black woman under 40, you are THREE TIMES MORE LIKELY to get triple negative breast cancer. You could be 25 and think you don't have to think about this until you're older. You're wrong. Do those self exams. I found my lump that way, and I had no risk factors for breast cancer. Harass your doctor about a mammogram.

If you are a man, promise me that you will nag your mothers, sisters, girlfriends, and wives about self exams. Please do not ask your co-workers. I'd like to spare you the sexual harassment lawsuit that is sure to be in your future if you do so.

As for me, I went to the gym and ran another 3.5 miles today, just because I could. Onward. Let's do this.
Email Post
Labels: black women cancer triple negative breast cancer

Unknown said…
Hi Liz, I was going through old emails and stumbled across your blog. I saw this post and just wanted to reach out and wish you the best. Hope you’re doing well.
-Monique Robinson (2005 TFA Corps Member, 2-Time Breast Cancer Survivor)
8:55 AM, December 26, 2019