The Best New Year's Resolution for 2013 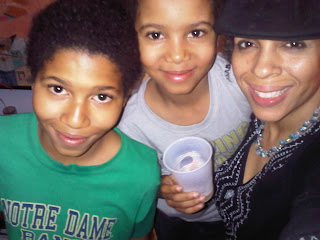 At midnight last night my 9-year-old crowed with glee, "2012 is over and we are still alive! Take that Mayan prophecy!"Then he wondered, how long until someone else comes up with the next The World Will End date?

While you're pondering that, I've been on vacation since December 22nd--which has been wonderful, but I didn't really start to relax until the day after Christmas. I don't think I'm mentally prepared to go back to work in the morning, especially since my sons don't go back to school until next Monday.

In any case, did you make some super ambitious resolutions for 2013? I've decided to retry 2011's failed resolution, which was to watch as much TV in my underwear as possible. I'm just not a big TV watcher so I failed at that before. But so far in 2013 I am winning at that one--there's a Tudors marathon on BBC right now and I have been watching it for three hours. Except not in my underwear. It is too cold for all that.

Sounds unambitious? Well, it was either that or recommit to sleeping more, exercising daily, not working too much, eating more kale, and reading a book a day. Oh, and being nice to people who try to touch my hair. All that sounds WAY too difficult right now. Ask me tomorrow and I may be down for all that. Like I said, I'm on vacation right now--I'm not trying to work too hard at this resolution thing.

However, I would be so thrilled if some folks I know would resolve to stop telling me why I should go see Django Unchained. I'm not at Tarantino fan and I'm not interested in his viewpoint on slavery.
For real, if I hear one more person explaining how Django Unchained is the most accurate depiction of slavery to ever hit the big screen my head may explode. How about read a book of slave narratives, like Bullwhip Days?

And before you point out that I'm sitting here watching the Tudors, which is laughably based on Henry VIII's reign--for example, homie never gets super huge on TV--I've read some good history books on the time, so I know what's what.

Hmm...I feel another resolution coming on: commit to independently investigating the truth in all areas of life. Yes, instead of relying on Tarantino to tell us what's going with slavery/black folks, read up on it yourself. Instead of taking the word of some education talking head that your local schools suck, go spend some time talking to teachers about what their days are like...see through your own eyes, and not through the eyes of others.

Sundry said…
Love the resolution talk, but what really got me to comment this time around, was Django Unchained thing. Yeah, I am also no fan of Tarantino. I don't agree with his take on the places and times I have lived in/through, so why on earth should I trust him with history?

You know what's really cool? You can go to Amazon and search Kindle books for "slave narratives" and there are volumes of those same WPA interviews by state, for FREE download to your Kindle or computer. I read a bunch of them when I first got my Kindle, and they are fascinating.

One of my dear friends is the head of the Oral History Dept. at UCLA (I worked there as a student) and we talked about the reliability of even these narratives. I was telling her how some of them were almost dangerously not-too-negative because in part the interviewees were little kids at the time of slavery. She said that, too, it depended heavily on who the interviewer was, which isn't noted in many of the books.
A former slave in the 1930s would have every reason not to trust a white person (or maybe any person!) coming around asking questions, especially when reparation payments might be at stake.

I need to look back at my notes. Some of them seemed more honest about the horrific nature of the experience than others.