Armchair Commentating Is All Good, But Are You Registered to Vote? 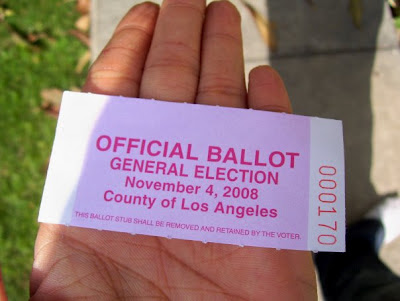 You know MTV has fallen off for real when both the Republican and Democratic National Conventions were more entertaining than last night's Video Music Awards.  Seriously, I kept waiting for a really awesome, memorable performance...and waiting...and waiting...and then they let those One Direction kids sing. *blank stare*

In comparison, the political party conventions have really amped up the showman-style memorable "moments". Last week at the RNC we had folks who pulled themselves up by their bootstraps, Clint Eastwood talking to a chair, Mitt Romney threatening Vladimir Putin--SOMEBODY please set up the cage match--and Paul Ryan acting like he's never seen "Liar, Liar".

This week at the DNC we had Michelle Obama looking like a stone cold fox while giving the speech of her life, Bill Clinton turned into the Right Reverend Bubba and started freestyling like he was in a one-man rap battle on cooperation and bipartisanship, the congregation caught the Holy Ghost, and Barack Obama reminded us of citizenship and how we have to step up and be a part of the change we want to see. Oh, and the freaking Foo Fighters and Olympic gold medalist Gabby Douglas were there.

All great stuff and it's been fun being an armchair commentator on Twitter during these conventions but real talk, if I wasn't registered to vote and fully intending to show up at the polls on Election Day, what is the point of watching and trying to figure out who actually has a plan and seems like they have a lick of sense?

I take voting extremely seriously. I believe we have a sacred responsibility to make an educated, thoughtful decision about who we feel will best serve the nation and then actually show up and vote. Since I turned 18, I have never missed an election. National, state, local--I am there at the polling place with bells on. In fact, a bonafide way to make me hate you is if you tell me you forgot to register, couldn't figure out where your polling place was, or got too busy at work to go vote. Unless you are in a coma or have some sort of other debilitating illness, there is no excuse.

Back in the day a guy who was interested in me told me he forgot to vote. Then when I stopped returning his phone calls he got all, what's your problem? I was like, look, you are a black man who could've gone to the polls and didn't. Me and all your ancestors who fought for the right to vote hate your I-was-too-busy-to-vote, excuse-making behind. And then he called me a light skinned bitch...and scene.

Now that that endearing flashback is over...really, if you are not registered to vote, make it a goal of yours to take care of that TODAY.

I'm not playing. There is no procrastinating allowed with this task! Most places have an early October registration deadline--time flies, that'll be here before you know it--and you don't want to be all, oh snap, I missed the deadline!

CLICK HERE for the registration deadlines and how-to information for every single state. Psst, you can even register online in most places. Go do it right now! And if you are registered to vote, make sure you ask all your friends and cousins if they are too. If they say no, help them get registered!
Email Post
Labels: a los angelista PSA Barack Obama Gabby Douglas Michelle Obama Mitt Romney Politics presidential elections voting

Lisa Johnson said…
I get so frustrated with people when I hear that they don't vote. It's so illogical not to participate in something that impacts our lives every day. Also, while I love that more people participate in Presidential elections, so many who voted will sit out other times. The people who end being our Senators or Representatives are just as important and those elections should be just as well attended. Will people ever learn?
8:15 AM, September 07, 2012

Sarah Auerswald said…
I can tell you had your Mom Face on when you wrote this, just like Mrs. Obama did when she addressed some of the small groups of delegates. Serious!
5:29 PM, September 07, 2012