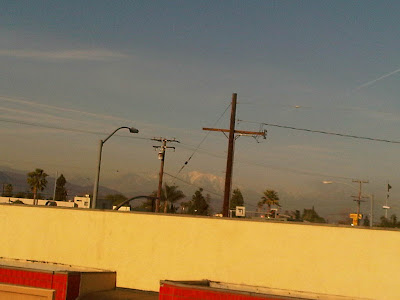 I don't like when people diss Los Angeles. When they say this city is too plastic and superficial, I tell them they're just hanging out in the wrong part of town--if I'm feeling salty, I'll remind them of one of my favorite quotes: "Like seeketh like and taketh pleasure in the company of its kind."

When they complain there are too many cars on the road and traffic is horrible, I ask them why in the world they were trying to drive on the 405 through the Sepulveda Pass at rush hour. Common sense suggests that doing so is a BAD idea.

When they complain about all the stupid hipsters, I cross my fingers that they'll get an acting job so they can stop being bitter because they're only waiting tables instead of turning into the next Ashton Kutcher.

But yesterday as I looked east across the San Gabriel Valley, toward the gorgeous mountains covered with a blanket of fresh snow--snow that's almost completely obscured by a thick layer of brown haze--I found myself unable to ignore the myriad folks who have, over the years, told me they can't deal with Los Angeles' pollution.

Mr. T and Mr. O had the same reaction: "Eww. Is that what we're breathing?"

Unfortunately, kids, yes. Although, of course I told them that the air looked worse because we were so far inland. "It's not as bad where we live," I said.

Except, that's not the point, is it? Air shouldn't be like this anywhere--not in poor areas, not in areas further from the coast. Everybody should be able to breathe freely. Besides, I know that the hotter it gets, the less likely it is that we'll be able to see downtown from our house--and we're only three miles away with a clear view of the skyscrapers. At least, a clear view when it's not obscured by a brown cloud.
Email Post
Labels: Los Angeles Mr. O Mr. T pollution

nick said…
So many cities now have a regular pollution and smog problem. You're right, air shouldn't be like this, it should be fit to breathe. Of course the simple solution would be to halve the number of vehicles on the roads, but so many of us now rely on our cars to get to work or out-of-town shopping malls or far-flung relatives, we're not going to give them up in a hurry.

Fortunately the air in Belfast is not that bad, as the population is only a few hundred thousand and we're surrounded by countryside.
1:22 PM, April 17, 2012

Leanna said…
Yikes! You are so right that air pollution isn't acceptable anywhere, since everyone deserves to breathe clean air. Environmental issues are usually about class and race as well. And Nick, you make a great point about the difficulty of getting around without cars these days. As individuals we can each make a difference, but real change will come when we work together to change the way our societies are structured!
9:31 PM, April 17, 2012

Annette said…
It's worse for us because we're in a basin. As soon as you get around the Angelus Forest, or past Long Beach it's beautiful and clear again.

Liz Dwyer said…
Nick
Clearly, I should be moving to Belfast and then I'll just bike around through the rain.

In all seriousness, I just don't see how the average person can ignore air pollution when we can see it!

Leanna,
Agreed, class and race DEFINITELY come into play. And although I carpool with my kids--drop them off at school on my way to work--if I wanted to take public transportation, it would take me like an hour and a half to get to work.

Annette,
I always wonder what it looked like 100 years ago before everything got so built up. Today it's going to be SO hot that the air is already looking terrible.
11:24 AM, April 19, 2012