Blog Action Day: The Environment According to Los Angelista

It's Blog Action Day and I've pledged to devote my post today to some topic related to the environment. I hope next year they pick an action day around promoting racial unity, but I'm down for making changes on behalf of the environment too.

If you've read this blog over the past couple of weeks, you know I've been on a crusade to get the trash in my neighborhood cleaned up. It's terrible to think that there are grown adults that think nothing of throwing their In-and-Out Burger wrapper on the ground after they've eaten it. Adults who have no problem tossing soiled diapers and cigarettes out their car windows. Adults who drink beers and then leave the cans in the street. Oh, and let's not forget all the people who throw broken furniture out on the curb and leave dead, discarded mattress out for animals to urinate on and homeless people to sleep on.

We always think someone else is going to clean up after us. After all, how many of us leave the half-eaten bucket of popcorn, the empty box of Junior Mints and the soda container on the floor of the movie theatre? Or are you one of the few who actually tosses your stuff in the trash?

Of course, here in LA, all that trash tossed away sits on the ground until the rain comes and washes it into the storm drains. The flood channels and the LA River fill up with tons of rushing trash...all floating into the Pacific Ocean. You can't swim in the ocean for a couple of days after it rains here. It's too toxic. Even when it hasn't rained, everyone I know who swims in the ocean eventually gets sick: ear infection, strep throat, weird skin rashes that doctors have never seen before.

Some people might wonder why I should care when I'm not a beach goer. I don't know how to swim and I'm not a fan of my rear in a swimsuit. But, I'm always reminded of my childhood and the one and only time my family went to the beach.

My brother and sister had a class trip to the shores of Lake Michigan. I don't know all the details, all the whys and hows of the trip, and how exactly my family ended up tagging along, but I do know that we ended up at the Indiana Dunes National Lakeshore. 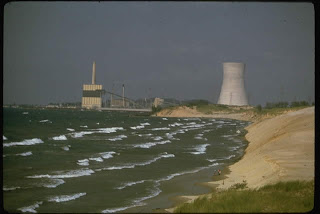 It's a beautiful place. Sand dunes that rise over 100 feet in the air and rare species of butterflies. All that was pretty, but I really remember marveling at the beautiful smoke coming from the steel mills and other factories directly west of the dunes. Sure, the air smelled horrible when driving through Gary and Hammond, but from a distance, the billowing clouds of white and yellow smoke that poured from those factories were pretty. They were only a nuisance because they blotted out parts of the Chicago skyline. And I thought nothing of the possible pollution provided by the NIPSCO power plant on the eastern side of the dunes in Michigan City.

I didn't connect either the factories or the smoke to the dead fish floating in the water as I bounced in the waves. I threw one of those dead fish at my brother. He screamed in terror and rushed from the water to tell my mother. I was promptly sentenced to spending the rest of the afternoon sitting on a blanket next to her.

It was only years later when I lived in China that I really began thinking about the environment. If I didn't cover my nose with a scarf or an oxygen mask while I was out riding my bike, I'd develop nasal irritation. The snot that came out of my nose was black from inhaling the pollution. In China, I never saw a blue sky with the sun glowing like a ball of flame. Instead, the sun was obscured behind a thick haze of coal smoke and other nameless pollutants.

I know a lot of people who hate environmentalists. They say environmental activists care more about saving trees than saving people. They say being an environmentalist is a pastime for middle class white folks who need a cause to latch onto. They say that the same environmentalists that fight illegal toxic waste dumping by corporations would be horrified if their child had to go to school with black folks. Or, they say that Al Gore is a fraud who presents misinformation and has the public believing things about the environment that aren't even true.

Maybe. But it's still important work. I can't imagine what the air in LA would be like if environmental activists didn't do what they do. And, when I walk my two sons to school and I see the amount of trash that my fellow Angelenos throw on the ground, I know that it's not just CEOs at power plants that need to change the way they think about the environment.

We all have to do our part, including me. Thanks to blogger Sundry, I'm taking October and pledging to break the bottled water habit. I'm once more best friends with a Brita filter instead. If you want to join us, then go to this site and find out how you can make small changes too.

I hear that China is working hard right now to clear up the air before the Olympics this summer. I'm interested to see how much progress can be made and if they'll maintain it after as well.

I recently broke my bottled water habit, and it was hard! But it's something I feel good about doing. I created a lot of waste with that water, and I wasn't setting a good example for Spike, either. So good luck!
8:21 AM, October 15, 2007

heartinsanfrancisco said…
An excellent post, Liz! When I read your words about how it's not just CEO's at power plants who need to change the way they think about the environment, I considered standing on my chair and cheering. (But my chair is on wheels.)

It shocks and terrifies me that so many people have such filthy habits and think nothing of throwing their trash wherever they happen to be.

We are supposed to be the guardians of this planet, yet we are destroying it much faster than it can repair itself.
9:52 AM, October 15, 2007

Jameil said…
the pollution thing appalls me. and yes, china is doing a LOT of stuff to clear up that pollution before the games.
10:12 AM, October 15, 2007

nyc/caribbean ragazza said…
I loved this post. Everyone who inhales air should be concerned about the environment.

I hope China does something about their pollution problem. I heard on the news some of our smog comes from there.

alyceclover said…
My first thought when I read about Blog Action Day was I wish it were on the subject "eracism", 'cause lord, I am sick of the Divided States of America.

I am one of those that actually throws my trash in the trash and have a habit people complain about, picking up other peoples' trash as well.

One of my blog action day posts, I made mention of the LA trash that makes it's way down to the river to be dumped in the ocean.

I also do not swim very well and I do like Long Beach's mini-waves; but Surfriders Foundation is using that water pollution to get the breakwater torn down.

Thank you for caring about the environment, which shows an unselfish love for people.

Liz Dwyer said…
Maia,
Gosh, if China's cleaning up the air, then I guess it's a good thing they got the games. Although how much LA would have improved if we'd gotten it is beyond belief.

Heart,
I love that part in "An Inconvenient Truth" where Gore has the scales with the globe and the bars of gold. Unfortunately, that's the way lots of folks see the world. We are imbalanced in our approach to our planet. But I think we can change it if we all work together! :)

Jameil,
I remember reading about how pollution is so bad that you can find rocket fuel in the folds of your lettuce. Isn't that just gross and toxic! It definitely makes me wash my lettuce very carefully.

NYC/CR,
China has something like 2/3 of the worlds most polluted cities so if they take the lead in cleaning things up, I have no doubt that air worldwide would improve. And I'm so happy to be one of your favorites. I thought I'd added yours to my list but I hadn't. I'll have to fix that asap!

Alyceclover,
Welcome and thanks for sharing your thoughts...I wholeheartedly agree on us having a blog action day about eradicating racism. It'd have to be something we'd each do in a meaningful way, or even us reflecting on our own racism or efforts to overcome racism would be meaninful. I'd really like that.
11:49 PM, October 15, 2007

For the past seven years we've had a President that said global warming didn't exist.

So despite making some headway the U.S. is seven years behind where we should be. (I hope Gore runs)

I think about the possiblities of wind and solar power. Do you know that in 2007 the U.S. is still building coal power plants? That's crazy.

Liz Dwyer said…
MDC,
I just saw some commercial about how coal is going to be our new energy future. I found myself thinking, "Wow, they really think we're stupid!" - been there, done that coal thing. But sadly enough, if it's cheaper, we Americans will go for it.

And to deny global warming is just a lack of common sense, but even if people don't want to admit it, didn't folks see Erin Brockovich? At least think about stuff like that! Sheesh!
6:54 AM, October 16, 2007

Ian Lidster said…
Very fine and thoughtful post, Liz. And I agree that our own small steps can make a huge difference, and it is all about attitude. I like to think the hope lies with young people, yet as I drive the road that goes by a nearby high school, I see more trash along the roadway there than most other places. Somehow the message isn't getting through. Something else that is vital is to change our love affair with the automobile.
11:04 AM, October 16, 2007

Sundry said…
Ah, I am so woefully unaware of the ways of the web some days. Next year I'll be ready for this!

Liz Dwyer said…
Ian,
When I was teaching, I started a recycling program at the school and did trash pickups in the neighborhood and took the kids to beach cleanups. Kids learn so fast. Once you have them tally up the number of cigarette butts they've found, they really get it. It definitely doesn't take much to change the way they think about the environment.

Anonymous said…
I thought you might be interested in this Blog Action Day on the 24th about genocide in Darfur, if you are not aware of it. http://www.associatedcontent.com/article/418250/blogging_against_genocide_in_darfur.html I linked it to my name.
8:11 AM, October 20, 2007