All I Did Was Push Her 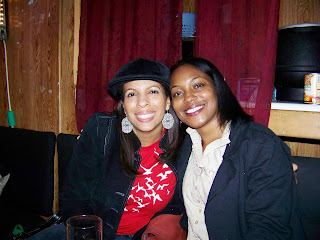 My lovely cousin Salena is here visiting me. She's here visiting from North Carolina and it's her first time here in LA. I haven't seen her in at least five years. I think the last time we saw each other, we were at a funeral. It's much more fun to see each other when we're not getting together for a sad occasion.

She got here on Saturday and, despite her jet lag, I took her out to see my friend Tom's band, Point Five, perform at a club called Studio Suite in North Hollywood.

We left the club at around 1:30 in the morning, observed a drunk driver in a minivan weaving across lanes on the 101 Freeway. Unfortunately , it's not just the Kiefer Sutherland's of the world that drive while ridiculously intoxicated out here. Thankfully though, we managed to get home safely.

Once home, we were up and chatting away when all of the sudden, my husband came into the living room whispering, "Are you hearing what's going on outside?" We had the windows closed in the living room and the two of us were making a fair amount of noise ourselves so we hadn't heard anything at all. But, we peered out the window and observed an LAPD squad car pulled up right in front of our building.

Apparently, some guy had been assaulting a woman right there under our windows. Good thing someone else had called the police because I hadn't heard any noise at all. My husband had heard though because the windows in my bedroom were open. All the noise woke him up. So we went in there to spy on what was going down.

By the time I got to surreptitiously peeping out 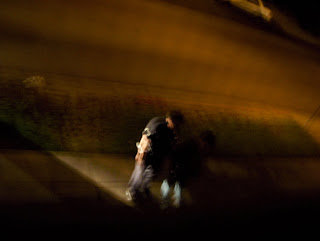 my bedroom window trying to photograph and videotape the situation unfolding right beneath me, the one LAPD officer had the guy handcuffed. The other officer was standing a few feet away with the woman. They both seemed pretty drunk and the guy kept saying things like, "All I did was push her! She's my wife, I can push her if I want to!"

In my mind, it needed to be the back of the squad car for this loser. But nope, the officers started to give him this big lecture on not putting your hands on a woman and how basically he just needed to let her go home and how they both needed to sleep it off. The wife gave the, "He really didn't hurt me!" spiel. And then, they took the handcuffs off the guy and let them both go. Both of them took off on foot down the street.

I've never been hit by a guy before but I know that making excuses is part of the cycle of abuse that women get caught up in. Still though, I just don't understand! I really had to resist the urge to yell out the window, "Why aren't you arresting him?" or , "You need to press charges! HE HIT YOU!"

My cousin and I both agreed that this guy was probably gonna start beating her ass the minute they were out of the cops' sight. We also agreed that if the guy had been black instead of white, the handcuffs would have stayed on and a trip to jail would have been the next step for him.

Despite this though, my cousin still thinks LA is awesome. Violence against women happens in North Carolina too so it's not like she'd think it's just something that happens out here.

We've all seen it before, too many times. And sure enough, a few minutes after the police were gone, we heard some yelling and a woman screaming. It sounded like it was coming from a couple of blocks away.

Was this noise coming from the same couple or was it a completely different scenario? Either way, it's sad.

Anonymous said…
I have been in two violent relationships...the first one was awful...he just broke my heart. The second relationship was heartbreaking because he knew what I had just come from. I was smart to leave the first relationship before I ended up with visible black eyes and more. He about killed me the day I walked out. The second relationship ended when he picked up my 3 month old daughter and tossed her on the couch so he could get to me...that was about enough for me! Luckily I did realize that I was worth more than getting my ass beat!
7:28 AM, October 01, 2007

Ian Lidster said…
Unfortunately -- and this is where it's wrong -- they can't arrest the bastard unless she presses charges. It's the same in Canada. A cop told me once that nearly 90 percent of women cop out when they're informed of that. Sad. Equally significant is that alcohol is a factor in well over 90 percent of domestic dispute calls the cops get.
I hope your cousin's visit was otherwise a warm and enjoyalbe thing.
1:27 PM, October 01, 2007

the last noel said…
We have to raise our daughters not to take bunk from anyone. Too often we raise our girls to be forgiving to a fault AND that a man gives your life meaning.
6:21 PM, October 01, 2007

M said…
Ugh. Unfortunately, we used to hear/see stuff like this all the time in our old neighborhood. Once our next door neighbor was burning all of his girlfriend's worldly possessions in a bonfire in the middle of the street - and they didn't even send the police - they just sent the fire department, who drove up real slow, quickly put the fire out, and then drove away without saying a word to our neighbors (not that it was the fire department's job to deal with it - but it would have been nice if they'd had a little police back up...).
5:44 AM, October 02, 2007

Liz Dwyer said…
Gyamfua,
I am SO glad you got out of those situations. I can't imagine how horrible it must have been to someone toss your baby like that. I can imagine really wanting to hurt someone who hurt my kids. Seriously, I'm so glad you got out twice, because I know it could have been a totally different situation.

Jameil,
See, the third time someone could be dead. That's just ridiculous. I kept hoping they'd find some drugs or something in his pockets so he'd have to get locked up, but no such luck.

Dena,
I just still can't believe that he got let go like that. It's just ridiculous. I wonder if the thinking is that they arrested everybody, the jails would be even more crowded. I just don't get it. I'm trying to make sense of a crazy policy.

Ian,
It seems like it should be recognized that 90% of women aren't going to press charges. At least make people go to anger management even if they don't get arrested. I totally believe it about the alcohol factor. What is it that I've read about playoff seasons and Superbowl Sunday being some of the worst times for abuse? Ugh. But yes, I think my cousin had a good time regardless!

Noel,
That is so true. And we have to raise our sons to not even dare to pull that crap. I think I'd sort of feel like such a failure as a parent if one of my sons ended up being the type of guy who hits women.

Maia,
That's crazy! I can't believe they just put out the fire and then left! It does seem like it would have made sense to have police involvement. I mean, that's arson, destruction of property. For a country that calls itself the greatest nation on earth, we sure do get some basic things really wrong.
7:19 AM, October 02, 2007

Thanks for your post. October is Domestic Violence Awareness month so it's a very timely peace as well.

Unfortunatly some cops handle domestic violence situations the "good 'ol boy" way. That seems to be what you observed. I think that women need to know that there is help and safe places to go. So many women feel trapped for financial reasons. Whenever police encounter a situation like this, they ought to be able to offer women a safe place to go on the spot.

This country is spending billions every month on the American war in Iraq, just a tiny fraction of that would save so many women.

none said…
Sadly, even if she got two black eyes she would probably keep coming back, refuse to press charges and stay with him.

Anonymous said…
Yeah, the police should have arrested him. They probably figured that she wasn't going to press charges. That, or they were just lazy and did not feel like going through the trouble of actually doing their jobs. Either way, it's an unfortunate situation.
2:31 PM, October 04, 2007

Liz Dwyer said…
MDC
When I read about how much more got approved for the war, it made me so mad. One fraction of that could fix so many problems back here at home. It's a shame.

Hammer,
It is too common. I think more parents have to make sure they raise their sons to not think it's okay to hit a woman. This is one of those areas where I think men can take a whole lot of leadership.

Anonymous said…
Something similiar happened to me and I was able to call the police on my cell.

The man was black and he went to jail.

We were inside his house when he and I got into an argument. I stormed out and he came after me. He pushed me and I started running.

He chased me down the street. He weighed about 300 lbs. So, I was able to out-run him. When I got about a block away, I called the police on my cell.

By that time, he had turned around and headed back to the house. He rammed my car with his car and then blocked it so, I couldn't get away.