September is clearly music month for me! I'm telling you, when I said earlier in the summer that I was reclaiming my life, I wasn't playing around!

Tonight, I'm going to see a duo called Blaqk Audio. They're performing at a club in downtown LA called "The Mayan'".

Blaqk Audio is an electronic side project from Davey Havok and Jade Puget, two members of AFI. You can read about how I got hooked onto AFI right here. 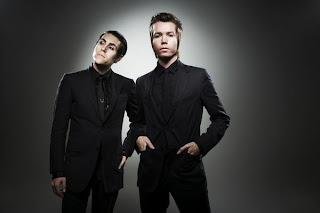 I'll probably be the oldest person there since it's an all ages show. The only thing that worries me about that is that I might get trampled by insane fan girls screaming, "Oh, Davey Havok, you're sooo hawt!" Davey's the one on the left.

If I escape those fan girls, I have to watch out for the ones screaming Jade's name, "Jade, I luv you!!!" He's the one on the right.

Despite the annoyance of "Javey" (Jade + Davey) adoration, at least I won't have to deal with pot heads like I did at the Muse show last week. Thank goodness, both Havok and Puget are Straight Edgers. The crowd that follows them tends to be the same.

If you're not familiar with the Straight Edge movement, it started as a subculture of the hardcore punk scene and folks who are into it completely abstain from alcohol, cigarettes and other drugs of any form. Some Straight Edgers also don't drink coffee, they become vegans or vegetarians and they don't engage in promiscuous sex.

It makes me wonder, will hip-hop ever develop a straight edge subculture? Wouldn't that be interesting!

Anyway, it should be a good show...and I'll get to hear live the song that's been my cell ringtone for the past couple of months, "Cities of Night".

I'm really glad I'm going. I need something to put a smile on my face after what I've seen this week. Don't you think?
Email Post
Labels: blaqk audio Concerts straight edge

Liz Dwyer said…
Oh, and I'm getting ready to walk out the door to the show right now! I'm so excited...probably by the end of the night I'm gonna be one of the fan girls yelling Davey Havok's name! YEE-HAW!
6:46 PM, September 27, 2007

West said…
Neat. I've never heard of the Straight Edge Movement, but I'd love to hear that such a thing exists within the world of Hip Hop.

Liz Dwyer said…
West,
Oh, it was a fantastic show. But, I don't think there's a Straight Edge hip-hop movement, unfortunately. I wish there was though.
6:27 PM, October 06, 2007