I think a pair of underwear got tossed onto stage.

Then again, maybe it was actually a lace glove. Or maybe I am just imagining that I saw underwear flying through the air in the direction of Davey Havok.

If I did imagine it, you have to understand: Tonight's Blaqk Audio show at The Mayan was HOT!

The opening DJ? Not so much. Howie Pyro text-messaged and yawned while phoning in his set. He did play an amazing track by Fischerspooner. Other than that, my three year-old could've mixed better.

Thankfully, his "performance" was soon over and Mr. Havok and Mr. Puget finally took the stage. Here's what I think made the Blaqk Audio show amazing:

1) The crowd was not the typical "Too Cool For School" LA crowd. Instead, this crowd was ready to let loose, dance and sing along to all the songs. It was general admission so things got a little crazy at times with folks trying push their way to the front. But, for once, LA represented!

2) Davey Havok is a great front man. The guy's been performing and touring with AFI for the past fifteen years or so and it really shows. He knows how to work a crowd. I mean, really work a crowd, hence the suspicion about the underwear. And while I didn't hear anyone yelling about how hot he is...um, yeah, he's a very good looking man in person.

3) Jade Puget is no slouch on the synths. He's the guitarist for AFI normally, but he's the music side of Blaqk Audio. Plus he sings backup, dances, and gets the crowd going. I wish I could hug him for creating the song "Cities of Night".

4) Davey and Jade were genuinely having fun together on stage. This is particularly true on their cover of Blur's "Girls and Boys". There's no faking how much they were enjoying themselves. I mean, when's the last time you saw a show where the entertainer seemed to be having as much fun as the audience? Sometimes performances just seem like something for the artist to get over with so they can go back to snorting coke. But not with these two. They had so much raw energy and enthusiasm. They even smiled at times while they were performing and laughed too!

I can't wait to check out some YouTube footage of the show. Everybody and their mama had their cameras out snapping pictures and taping the show. (I didn't take my camera because I just wanted to enjoy the show without worrying about taking pictures.) 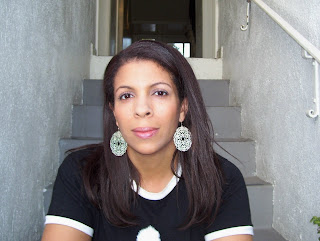 5) This concert was another excuse to me to wear a Depeche Mode t-shirt. Not that I need an excuse, but you know what I mean. Here I am, wearing one of DM's last tour shirts a mere hour before I left to go to tonight's show. (I look like I am still mad as all hell that I took my eldest to soccer practice and found out that it was canceled and his coach didn't call.)

Anyway, some folks think Blaqk Audio sounds like Depeche Mode. They really don't. But it felt good to rep the kings of alternative/electronica/rock at a Blaqk Audio show. A few other folks had the same idea. I saw several other DM shirts tonight.

I suppose more than anything, I'm happy I'm once again doing the kinds of things I love to do, the kinds of things I stopped doing when I let my job consume my entire life. Being a workaholic is not fun. If you happen to be one, please stop and remember that there are other things in the world you need to enjoy.

I don't know if you'll get to enjoy seeing Blaqk Audio live anytime soon since tonight was the last show of their tour. Let's all hope they embark on another sometime soon. We need things that put joy in the world and smiles on people's faces.

I'm glad you had fun, I haven't been to a concert in a long time. I'm agoraphobic so I usually buy concerts on dvd. (lol)

And thanks for mentioning the Straight edge movement, I read a bit about it and it seems interesting.

Rap music is not authentic anymore, so I think the passion and love needed to spawn a movement isn't there. But it would be very interesting if it did.
7:31 AM, September 28, 2007

Ian Lidster said…
Depeche Mode or not, it's always a treat to look at you. Glad you enjoyed, and I suspect it was underwear flung, or that might just be my wicked mind.
8:11 AM, September 28, 2007

Liz Dwyer said…
Jameil,
Definitely hooray for fun! I felt like I was gonna die when the alarm buzzed at 6 this morning, but it was well worth it. I'd been looking forward to this show for so long that it's weird to think that it's over.

MDC,
I really wonder what it would take to spawn a hip-hop straight edge movement. It seems like almost every rap video has drinking or simulated drinking in them. I hope this generation just flips the script and starts to reject the poisons that are marketed and sold without hesitation

BZ said…
SO glad to have a real music fiend friend! :-) If you have time, check out The Eclectic Collective (originally from Mass, they have 2 short albums out). Not DM related, but that kind of "good-different".
1:52 PM, September 28, 2007

1969 said…
Liz....I am so glad you had a good time and that you ar emaking time for YOUR interests. That makes for a happy mommy.

heartinsanfrancisco said…
It sounds like a great evening. And you're right. No matter how great (or necessary) your job is, there are still other things in the world to enjoy.

tommyjr97408 said…
BZ,
Yeah, I am a little bit of a music fiend! I'll check out that group. Thanks for sharing.

1969,
LOL! You know when I look at that picture, I mostly see the wrinkles under my eyes and think, "KINERASE"! But my six year-old took it and liked it so I figure it's up in his honor and so I can remember what I looked like at my first Blaqk Audio show. And yes, good music and dancing does make me so much happier. I need to do it more often.

Heart,
Oh, it was so much fun. I wish I could rewind it and do it again. I seriously lucked out getting tickets because it's just a smallish club (fits like 900 people) and it sold out in like 2 minutes. In the past, I would have probably been working till late and would have totally missed out. I'm so glad those days are over!
2:34 PM, September 29, 2007

Liz Dwyer said…
Dear Pyro,
I am sorry if what I wrote hurt your feelings. As an artist, you certainly open yourself up to both praise and opinions that are less than praiseworthy. It's a risk we all take...and I suppose it was a bit harsh of me to say that my three year-old could DJ better.

Please know that my ears and my mind are absolutely open, but overall, I just wasn't feeling your set. The music was alright, but the mixing wasn't smooth to this listener's ears. The fact that you're friends with Davey and Jade doesn't change that. And I am not one to think that everything and everyone associated with them is automatically golden.

But, perhaps I will encounter your DJ'ing in some other LA venue and have a completely different opinion.