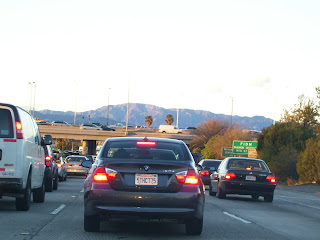 Yesterday, I saw things that I almost never see in Los Angeles. No, not concrete freeways and not the BMW in this picture. I see both of those all the time.

Look past the car, past the concrete, above the overpass...what do you see there?

"Just some mountains," you say?

Well, let me tell you, I drive home on the northbound 110 Freeway every day and I rarely see those mountains. It was so clear in Los Angeles yesterday that it was an event worth talking about. Everyone I spoke to was exclaiming, "Wow, can you believe how clear it is?" Yeah, who knew those mountains were there. It was so pretty that I found myself thinking about what the original group of thirteen that founded Los Angeles over 300 years ago must have seen. 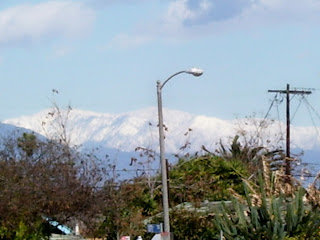 Yes, it was so clear that I could see downtown LA from Compton, eleven miles to the south. That NEVER happens. Usually, I can't see downtown until I'm two or three miles away. And then, for those of you who want it all, you want to ski in the morning and go to the beach in the afternoon...I could see snow capped mountains to the east. I could see the mountains in this photo from Watts. I took it while standing on the playground of a school. You all should have seen the kids pointing at the mountains and the snow. I overheard one kindergartener ask another, "Where did those mountains come from?" The other replied, "What's that on top of them?"

What do we usually see instead? Why, absolutely nothing but some pinkish-brown haze in the sky. I like to say that haze is just some fog that hasn't burned off yet. Except that I see that haze almost every single day, no matter what time of day it is. I guess I need to tack an "S" and an "M" onto the beginning of "fog" and get rid of that pesky "F". I think we all know what that spells, right?

If you follow the news at all, you know that Al Gore's documentary An Inconvenient Truth won a well-deserved Oscar this past Sunday. I saw it last May, almost a year ago, and wrote about it here. Everybody thinks it's a great film but we all still want the magic pill to make the smog go away.

I wonder if LA will every reclaim her true beauty. I wonder if twenty years from now, folks like me will still be snapping pictures of sights like this, sights they rarely see.
Email Post
Labels: Al Gore An Inconvenient Truth Los Angeles mountains pollution Smog snow watts

West said…
Let us know how long it lasts.

meera bowman-johnson said…
On a clear day, I can see the Catskill Mountains from two or three spots as I drive through this tiny upstate enclave...absoultely breathtaking, each and every time. Something about the -32 degree weather puts a bit of a damper on things, though.

My husband and I lived in LA (Venice, actually) for about four months after we first got married. Still dream of being there again to take in all the beauty. At this point the best we can hope for is to get back there for our retirement. Hopefully the lovely vistas won't entirely be a thing of the past by then.

But at least there are those sunsets...which I've heard are actually enhanced by smog particles.
7:52 PM, March 01, 2007

Anonymous said…
Thank you Liz, btwn African American Dad and this blog, it fills me with so much hope, insight and laughter. I relate to you so much as a mother, as a person who was considered an oreo, as a person who had very strict parents, and as a person who has been to Asia (Taiwan) for a decent period of time. Thanks so much...please keep writing!
7:58 AM, March 02, 2007

Ms Melancholy said…
Ok, naive Brit posting again! But I can't believe that those beautiful mountains are hidden by smog so much of the time that school children stare at them in surprise. Isn't that so sad? We really are fucking up the world, aren't we?
3:32 PM, March 03, 2007

The other night Hydra and I were watching something supposedly set in Cabo San Lucas. Now, I've never been there, but I'll bet it doesn't have that pinkish air layered over the water down there!
6:17 PM, March 03, 2007

heartinsanfrancisco said…
I love L.A. and always think of it in sunshine, with sparkling blue water, gorgeous skies, and yes, the mountains ringing everything. I refuse to see smog, and consider it a myth. :)

Anonymous said…
Seeing those mountains must have been kind of like bumping into an old friend, "oh I haven't seen you in years, how are your hills?"

Or maybe it was more like seeing the spirit of an ancient being standing guard like a duty-bound sentinel over a bustling metropolis.