Insomniacs And Their Overactive Imaginations

I can't sleep. And no, counting sheep is not going to help me.

It's not for lack of trying. But at some point, I just ixnay on the lying in bed in the dark thing and get back up. Sooo...now it's almost one in the morning and I'm listening to the Dave Dresden remix of Dave Spoon & Bill Hicks' "I Love Everything At Night". It's a little trancy and a little bit techno...and dang it, how apt is this song title right now?

Actually, I think that's part of the problem. I do love everything at night just a tad bit too much. I never wanted to go to bed as a child. In fact, I find myself thinking about how when I was a little girl, I really wanted to be a vampire. Yes, I know, it sounds crazy to want to be a vampire, but believe me, I did. Some of y'all wanted to be Barbie or Batman...same difference! (well, sorta!) 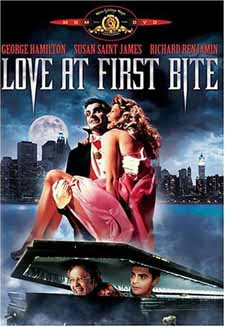 You see, one of my favorite movies when I was a kid was Love At First Bite, the vampire movie spoof where George Hamilton is Dracula and he moves to New York City and falls in love with Susan Saint James. She falls for him too and they turn into bats and fly into the moonlight together. I was six when it came out so it probably came on TV a couple of years later and I know that's when I saw it. Dracula wasn't scary at all. I mean, he was being played by George Hamilton so how fiendish could he possibly be? Well, fiendishly handsome but there was no hint of Dracula being a monster. In fact, he's the "hero" of the story.

Now, here's where you're going to think that I was one crazy kid: I used to go in my room in the afternoon, pull down the room-darkening shades my mom had put over the windows and lie prone on my bed, my arms crossed across my chest... just like a vampire in it's coffin. My sister would occasionally walk into our shared bedroom and, full of malicious intent, she'd pull the shades so they'd flick open with this horrific snapping sound. Light would instantaneously flood our bedroom. I can remember moments where I believed the sun was going to actually burn me to death. What can I say? I was a kid with a very hyperactive imagination.

I think initially I was into the fact that Dracula had no bedtime. And in the movies vampires are rich, clever and beautiful. Even after I saw Nosferatu and Fright Night, and it became crystal clear that Dracula was not always a hot guy who just happened to have fangs, the whole Vampire thing still fascinated me. I may have stopped wanting to be a vampire (thank goodness) but I was still into the lore and the legend. I suppose that's why I've read Dracula 218 times in the past twenty years.

Given all my interest, you might be wondering if I believe in vampires. Hmm. Well, I don't think vampires are those crazy folks you see on Dateline NBC that drink each other's blood and go to the dentist to elongate their canine teeth. Those folks are just confused.

Nowadays, I find myself thinking about how we've all met someone who tries so hard to latch on to us, and then just ends up trying to suck the life out of us. You know what kind of person I'm talking about, right? It's the person you've determined is toxic to your emotional, social and spiritual health. Well, to me, that person's a vampire. Really, isn't that the worst? Don't you wish you had some holy water to just toss on that person who's trying to sink their teeth into you? Don't you wish the sun would turn them to ash or make them run for cover? I know I do.

Ok, I'm going to give the sleep thing another try. Maybe if I do a little more pretending and lie down in my bed like I used to back in the day, arms crossed in an X across my chest, I'll be distracted from all the things I'm thinking about and actually go to sleep.
Email Post
Labels: Bill Hicks Dave Dresden Dave Spoon Dracula Insomnia Love at First Bite Vampires

none said…
I can seriously relate to this post. I loved those two movies you mentioned. I'm going to have to order them for my own kids.

Liz Dwyer said…
Hammer,
Yep, there's a whole lot of movies I want my kids to see when they get older. I wonder how old is old enough to see Love At First Bite. Hmm. You ever feel that stress of loving a movie and then worrying that your own children will think it's wack? I worry mine will spend their time saying, "Oh, those special effects are sooo fake, mommy!"
7:27 AM, March 26, 2007

heartinsanfrancisco said…
The scariest thing about George Hamilton was his orange tan, and I'm not even a dermatologist.

I've always been a night person, too. Sleep-resistant. And I think of those folks you describe as energy vampires.

Oh, I almost forgot, Liz. You've been tagged. Details at my place.

velvet said…
I'm a life-long night person and I used to love vampire stories, too. Do these things go hand in hand, perhaps?

I think that eating garlic just might help repel the life-sucking vampires that you mentioned, though it'll drive away the non-vampires, too. ;)
8:55 AM, March 27, 2007

Liz Dwyer said…
HISF,
Ooh, love that I've been tagged! I'll come visit and see what for. And, who would've guessed that George's orange would be so prevalent in 2007 thanks to Mystic Tan!

Zorak,
Werewolves actually scared me after I saw the Thriller video. Plus, too much body hair...

Jon,
Aren't they though!