It's three in the morning and I'm still trying to sort out everything I've experienced during my first day in New Orleans.

I'll confess that whenever I come to the South, I'm very conscious of the fact that slaves once stood on the same ground I happen to be walking on. I got off the plane and was immediately confronted with "Tour a Plantation!" advertisements. I wondered, do they show it all? Do they show the fields and the slave quarters? Do they show whipping posts and slave cemeteries? Do they explicitly discuss slavery on these tours? (I've heard they don't) or is it just a ride through the glory days of the Old South, when everything was much simpler and Negroes knew their place? And is there a moment of silence where we honor the memories of the countless souls that suffered unspeakable horrors? 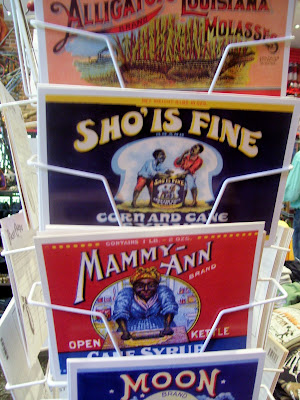 For me, I see the word "plantation" and I think of whips and chains and scenes that were first visualized for me while watching the mini-series Roots. I think of blood flowing down scarred backs. I think of those backs broken from bending over in cotton fields and hands raw with the pain of picking.

Other people are not thinking of these things. They're thinking of sipping mint juleps on a spacious porch.

And, I wonder, who exactly buys these postcards? I found them in a store a couple of blocks away from my hotel. I don't think black people are the ones trying to hold on to precious memories of "Mammy". To the chagrin of the sales clerk, I snapped photos of Mammy-Ann and her gens de coulers. While I'm marinating on this image, let me go ahead and thank God right now that I still have an aversion to Aunt Jemima pancake mix, Mrs. Butterworth's syrup and Uncle Ben's rice, if only because of the resemblance to images like these.

A walk down Bourbon Street feels a little bit like, bar-bar-strip club-souvenir shop, repeated a dozen times. It feels like a fantasy land for the seven deadly sins. The smell of stale vomit laces the air and absolutely nothing feels forbidden. Oh, and let's not forget the black children out tap-dancing with the crowds of white folks standing around watching. I'm terrible, I know, but I think they're thinking, "Just look at those pickaninnies move!"

Yes, what I saw last night... it's like being Luke Skywalker and going over to the "dark side".

The most puzzling thing for me was that other than cooks in the kitchen and these kids, where are the black people? You know, the ones that probably let Harry Connick Jr. play horsey on their backs and taught him about jazz? Um, I'm in New Orleans and I feel like I stick out like a sore thumb. I feel like I see more black folks at home in Los Angeles.

But, not all the black people are gone. All the craziness I saw on a Sunday night on Bourbon 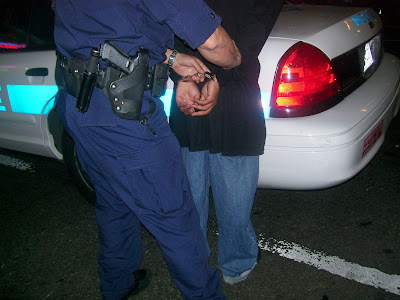 Street, and the only person I saw getting arrested was this brotha right here.

I wish I would have snapped photos of all the middle-aged married men getting their freak on while dressed in their Dockers flat-front khakis and polo shirts. I'm sure their wives would love to see images of their "faithful" spouses walking into the strip clubs, wedding rings glinting faintly in the dimness.

If I just stayed here on the edge of the French Quarter, I might start to think that nothing's wrong in this city, that it's back to it's normal self. After all, look at all the people throwing beads off the balconies and letting the good times roll.

Sure, it's fun to do the electric slide in the middle of the street. Yes, I had a great time wearing a cat-mask without anyone batting an eye. But, it's not good enough. It can't stop there. If all the revelers venture beyond hedonism-central, what does the rest of New Orleans look like? And do these people happily tossing beads care or even want to know?

One of my colleagues, James, taught here and yesterday he went to the neighborhood where his school is. Or was. He said it's a ghost town. Hopefully tomorrow I'll get to see some of that for myself.
Email Post
Labels: mammy New Orleans plantations racism slavery The South

Anonymous said…
I've just returned from spending the weekend in New Orleans with James, where I lived for a year.

It's amazing, and somehow comforting, that most of my old haunts (apartment, work, shopping centers, French Quarter, Garden District) are back to looking like their pre-Katrina selves, finally, 18 months after the storm hit. But for a few blown-out signs and a few closed businesses, these areas look the same. The same cannot be said for the neighborhood in which James taught for two years.

Before driving through it on Saturday, we knew it would be bad--we expected that. But it never occurred to either of us that we would be confronted by a ghost town. It never crossed our minds that everyone would just be gone. It makes perfect sense in retrospect--the homes certainly didn't look inhabitable--but for some reason we expected it to be the same bustling place (for better and for worse) that we remembered in our minds.

And yet, in the middle of this ravaged neighborhood--which was the worst we saw--John A. Shaw Elementary School stood proud, its three stories of solid brick looking virtually untouched amid the destruction around it. The marquee still stands, letting anyone who may pass that this is John A. Shaw, without any evidence of wind damage. And though the interior of the building is likely filled with mold and decay, one could almost imagine teachers and kids heading to school there this morning--if there were any kids left in the area to attend.
10:35 AM, March 12, 2007

West said…
I feel your comparisons. I probably would've felt similarly, if I'd witnessed the same things.

Liz Dwyer said…
Colleen,
I've just come from driving through the 9th ward and I have this indescribable feeling in the pit of my stomach...it feels like grief. I wish James had been sitting next to me so I could hear from him what it used to look like. We went to right next to where the levees broke. I took a lot of pictures which I'll post later today. Now I think I'm glad that some of the other areas are back to seeming more like their pre-Katrina selves because it's overwhelming.

West,
I have so many things going through my head...can't organize my thoughts. My husband is cool with Aunt Jemima as well...I tried to tell him it was poison and that real maple syrup is better...but he's not buying it!
3:31 PM, March 12, 2007

Mark Folse said…
Strangely, I understand that black middle class people do collect the sort of tacky salt and pepper figurines my wife makes me keep hidden in the spare kitchen/office.

You won't find many black people except servers in the Quarter, or tourits like yourself. Then, you won't find that many white natives on Bourbon Street either, unless they going to or coming from work.

If you ventured out of the Vieux Carre you can find more genuine culture. Too bad you didn't know about the Dinneal Shavers benefit last night at the Rock-n-Bowl in Mid-City, one of the first really mixed events I've been to after coming home following an absence of nineteen eyars.

We self-segregate here in most things just like the rest of America. New Orleans is certainly not a racial wonderland. We are deeply divied by political leadership on both sides that plays off racial tension to get ahead. Its gotten worse not better during my almost two decades absence.

none said…
I liked Jackson square, the food, and the museums. Pat Obriens piano bar was cool too.

Liz Dwyer said…
Mark,
Thanks for coming by to pay me a visit. I went to check out your blog and found it highly interesting. I don't know any middle class black folks that have those figurines in their homes, but maybe it's a regional thing to do so.

Thankfully, I did make it out of the French Quarter today! Went to the 9th ward, dined at Jacques Imo...drove throught the Garden District.

Of course you are right about different racial groups getting played against each other and I don't think that NOLA has some patent on racism. It does feel different here though. In Los Angeles, it seems much more hidden than it is here.

Anonymous said…
Liz, hi, completely off topic but you may remember me from the China days, it's Sharifa (from Sweden). I ended up here via some parenting sites, just wanted to say hello!
1:08 PM, March 13, 2007

heartinsanfrancisco said…
I was in New Orleans once, in the late 80's. I also wondered about the lack of references to slavery, but the locals walking around seemed fairly evenly divided racially, and the city seemed genuinely open to all.

It was markedly different from Charleston, SC, which still has a huge building by the harbor where the slaves were auctioned off. I know it sounds silly, but I honestly felt something in the air which I interpreted as enormous, unimaginable human pain. I was unable to enter the building, and couldn't breathe right until I was a block away.

Later, I bought a wonderful "Lowlands" basket from a beautiful woman in a park who told me as she wove it about learning the craft from her mother, who had learned it from her mother, back to the days of slavery. And I was awed that even with all the unspeakable pain in their lives, people managed to create things of great beauty. It's very humbling.
7:53 PM, March 13, 2007

Similar to your experience in South Carolina, there is a sense of deep pain in this city. From my colleagues who've worked here and lived here, they all say that it is very racially divided, even down to the restaurants people go to.

But there's also the sense of endurance, of perseverance in the people here. That's what gives me hope. I'm still not down with Bourbon St. but the rest of the city is beginning to grow on me because of the energy and spirit of the locals.
2:13 AM, March 14, 2007

Tafari said…
I felt like i was there with you. I appreciate you vivid details & POV!

it is such a shame how the demographic of the population changed post Katrina.

Liz Dwyer said…
Bygbaby,
Yes, I wonder what it would have been like with the numbers of people that used to live in New Orleans. I doubt it can ever go back to the way it was before.
3:11 PM, March 17, 2007