The Miss Universe pageant was held here in Los Angeles tonight. Miss Puerto Rico won. I'm giving myself kudos for calling her as the winner within the first five minutes of the show...maybe I could have spared myself the two hours of suspense. Her dress was made out of metal and looked like some really fancy chain-mail. I know that sounds bad but even Carson Kressly from Queer Eye thought she had a hot dress.

Yep, her dress was hot. Literally.

It was apparently so hot that the poor woman fainted twenty minutes after she was crowned. The heat from the stage lights must have sizzled the dress up. Put that with the excitement of wearing a $250,000 crown and sitting mere feet away from Mayor Villaraigosa...well, it must have just been too much! 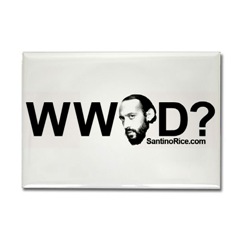 A security guard carried her offstage.

You see, Santino from Project Runway was one of the contest judges. It would have been much more interesting if he'd leapt onstage to rescue Miss Puerto Rico and then stuck one of his "What Would Santino Do?" magnets to her metal dress! Now that would have been hot!
Email Post

the last noel said…
Miss Japan--who should have won--would never have fainted. Poor Miss Puerto Rico. She will forever be remembered as the delegate who toppled over causing international speculation as to why.
3:58 PM, July 28, 2006