Ease On Down The Road

The "Wizard of Oz" is one of those movies that is only shown on tv at certain times of the year, kinda like how "It's a Wonderful Life" gets shown at Christmas. I guess the 4th of July is one of the appointed times for us to all follow the yellow brick road. The film was on AMC movie classics on Monday and my channel surfing children found it. They were abso 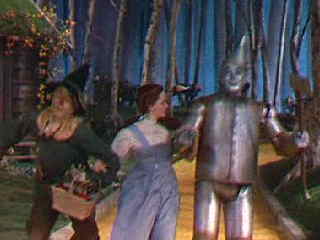 lutely crazy about Dorothy and Toto.

I remember my high school physics teacher talking about how there were several accidents and a death on the set. She said the most famous was the "hanging" scene when they are leaving the Tin Man's cottage. None of us students believed her so she actually rented the tape and brought it in to show it to us. We flipped out! You could actually see a body swinging back and forth as the trio sings, "We're off to see the Wizard..." Nowadays I can google 'Wizard of Oz hanging' and read how the official story is that it's not a stage-hand that accidentally hung himself. And it's not a munchkin that got caught in a rope accidentally either.

Yes, it's a bird and it only looks like a person on the small screen because of pixelation issues. Mmm. Hmm. Right now, I am a prime example of what happens when someone is confronted with the truth but doesn't want to believe it. The hanging story is just so much more interesting. More morbid, but definitely more interesting.

After Dorothy clicked her heels together, went home and swore there's no place like home, AMC showed another classic that my kids had not seen before, "The Wiz". I know, I know! Shame! Shame! My Black card is gonna get revoked! Let's face it though, when's the last time you saw "The Wiz" on tv? It's been years! We do have a tape of it, but no VCR to watch it on.

All in all, the kids loved it, although Olinga did not believe that Michael Jackson was the Scarecrow. This is the pre "Off the Wall" Michael. This is Michael without nose-jobs and skin bleaching. Everybody should drive through Michael's hometown, Gary, Indiana. Drive through just once to see if you'd be singing, "There's no place like home" if you lived there. For some reason, I think you'd pick Auntie Em's farm any day.
Email Post