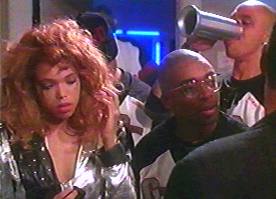 It's hard to confess, but yes, it's 2006 and I'd never seen one of the most important films ever made about Black folks.

Elarryo has a long list of movies I've never seen and he believes it's imperative I watch them before I leave this planet. One of those films is "School Daze" by Spike Lee. In preparation for Black History Month, I was treated to the complete home theatre experience of the film.

This photo is an image of Tisha Campbell playing a colorstruck girl named Jane Toussaint, and Spike himself playing wannabe Gamma Phi Gamma frat boy Half-Pint. In the film the character Jane is the queen of the light-skinned sorority sisters, the Gamma Rays. She has over the top blond/red hair and fake blue contact lenses.

In 1988 when this came out, it was a big deal in the Black community to have a weave and fake contacts... jump forward 18 years to Beyonce Knowles. Is Beyonce channelling Jane Toussaint or what?

We look at L'il Kim nowadays and shrug our shoulders, "Yeah, she thinks she's Barbie but more power to her if that's what she wants to do." Go ahead and keep getting those blonde weaves, bleaching your skin and straightening your nose Kim!

How interesting is it that today, pretty much any Black female actress, model or singer wears a weave...it's just standard practice now. And we think nothing of seeing Ciara with long blonde hair down to her behind. Do we think it's real? Or, perhaps we should all stop throwing stones at James Frey since none of us are really too caught up in what's the truth and what isn't...as long as it looks good, that's what counts.

Black folks used to be up in arms over the plethora of light-skinned women in music videos. It was always clear that the darker skinned sistahs were not high up on the beauty booty-shaking totem pole. Well, guess what Black folks, we done played ourselves...turn on any video by any Black male artist nowadays and guess what, there are almost no Black women (light skinned or dark skinned) anywhere in the videos at all unless there's a significant amount of dancing. Otherwise, for your typical video consisting of, "Hey, let's all dress in white and have some slo-mo shots of us grinding against some hot girls", it's all about folks that have Black ancestry but are reluctant to claim it: Brazilian, Puerto Rican, Cuban, and Dominican women. They have the light skin and they have the straight hair that we all seem to want...

Have you seen P. Diddy's new ads for his fragrance Unforgivable? He isn't even trying to check for Black women. He's successful enough to have an Asian woman sprawled across his leg and a Latina sitting in the background...but it's too sexy for stores? Okaay...maybe if he got a little more muscle tone and maybe if the both women didn't have these looks that seems to be saying, "Ok, I'm so going to kill my agent because I'll never get a good date after this ad goes public."

Because we Black Women have it so bad (you know, there are no good Black men and all that jazz), Hollywood has given us a special Black History Month present in the form of a movie called Something New . Don't you feel special now?

Apparently, the "new" thing is supposed to be Black women being found attractive by white men.

Hmm...I guess everybody done gone and forgot about the white male massah sneakin' off to the slave quarters to get with those Black female slaves. All in favor of Black History Month keepin' it real say, "Amen."
Email Post

Anonymous said…
HA! I love it!

Anonymous said…
i'm a year late with this comment, but a couple things occurred to me...

i had to ask myself, why do we (as human beings) become complacent about things that felt unjust or inhumane. i.e. 20 years have passed and we no longer care about beyonce and kim and any other woman dehumanizing herself.

which leads me to ask how is it possible to develop a fire for something and sustain that fire? it seems like part of what leads us to complacency might be exhaustion.

and then, i'm also thinking about the problem with adopting values based on the "new thing" advertisers/producers want to sell us. but, i don't have any points to make about that yet.