The Randomness: Finally, the End of a Friday After a Crazy Week

Too many nights this week I fell asleep sitting straight up in a chair, so here's what's been going on in Los Angelista Land.

1. Hurricane Sandy (OBVIOUSLY): I spent much of Monday night texting friends on the East Coast, worried and making sure they're alright. The good news is that most of my loved ones are fine--they've been without power, had to take baby wipe baths, and struggled to get gas, but they're alive.

Not everyone is as lucky--nearly 100 are dead. The damage is devastating and I wish I could do more than give money and share links about ways for folks to help.

What I can't stop thinking about, however, is this Democracy Now interview with David Rohde about how the hurricane has exposed NYCs hideous extremes of wealth and poverty. Interviewer Amy Goodman (I want to be her when I grow up) gave some stunning stats on how inequality in NYC rivals that of Sub-Saharan Africa. "the wealthiest 20 percent of Manhattan residents made $391,022 a year on average, according to census data. The poorest 20 percent made $9,681," she said.

Rohde, who, with his family, evacuated to a hotel noted,


"And it was this sort of extraordinary divide in terms of—there were restaurants open just down the street until, you know, a few hours before Sandy hit. Stores, the hotel itself was staffed. And I started asking people, like, "Why aren’t you home with your families?" And they were—you know, these were sort of maids, doormen, restaurant workers, and they said they were worried about their families, but they had no way—you know, they just had to work. And, you know, it’s, as you said in the intro, the economic divide, that the richest 20 percent make 40 times what the poorest 20 percent make in New York. And, you know, wealth and money helps you. It helps you—it gives you advantages. And the storm made that very clear."


This is true in every American city. What happens in Los Angeles when the Big One hits? Will we see the same?

2. Parley? Halloween Is For Pirates: I dressed up as a pirate--yes, I went to work like this. My 9-year-old, Mr. T, said I look like the Prince version of a pirate. 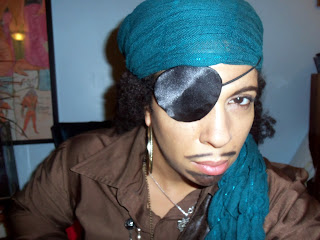 I've been told innumerable times over my life that I look like Prince so heck, I might as well embrace it and be Prince next year for Halloween.

3. Scary Monsters and Nice Cowboys: 11-year-old Mr. O dressed up as a scary pumpkin scarecrow. Mr. T went as the most adorable cowboy on the planet. Seriously, I know he's my son and all but the kid is CUUUUTE. 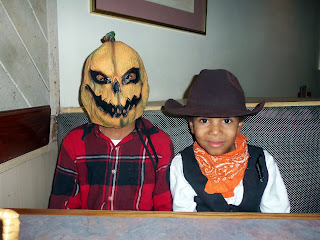 4. I'm Doing NaNoWriMo Again Because I'm Clearly #%*@& Insane: Around noon on Halloween I decided to give NaNoWriMo another whirl--because what makes more sense than trying to write a novel while you have so much going on that you fall asleep sitting in an armchair at least half the nights of the week? I'm at nearly 5,000 words total right now so I'm actually pretty much on schedule with the word count, but seriously, the story is kinda crazy. The kind of crazy that 10 years ago I would've been like, OMG, what will my mom think if she read this? But they say write what you know so I'm like, mom, if this ever goes anywhere, SORRY!

5.  I Don't Know What You Thought, But I Am NOT The One: Don't you hate when people try to punk you and then act shocked and offended when you don't play along? Yeah, me too. I don't know if it was the full moon or what but a few times this week folks tried to go there and I wasn't having it. And for once, I didn't try to smooth everything over and be all peacekeeper girl. It is what it is.

6.The Most Listened to Song of the Week: Listened to it over and over while writing this week. Don't know what that means but take a few minutes and dance. It's been a tough week. We all need it.

nick said…
I have a friend in Brooklyn and she's been giving me the inside story of when Sandy hit NYC. She was really really scared with the colossal winds whipping round her house. Luckily she wasn't affected by the flooding. As you say, the aftermath makes the obscene wealth gap very visible.

Liz Dwyer said…
Nick
The pirate thing was fun--I miss my fake facial hair. Also, I'm so glad to hear that your friend in Brooklyn is alright as well. There's going to be a long road to the cleanup.