About That Time I Ate 20 Twinkies in One Sitting... 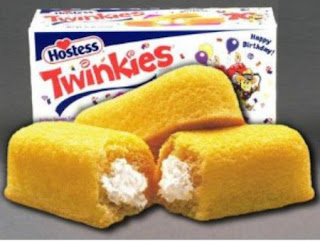 Is a world without Twinkies upon us? The shelves at my local grocery store that used to be filled with packages of that icon of indestructible junk food--you know the joke, what will survive a nuclear apocalypse? Roaches and Twinkies--are bare. But chill out, America. With $68 million in sales so far this year, it's likely that somebody is going to buy the Twinkies brand.

If that can save some of those 18,000 jobs that were set to evaporate because Twinkies manufacturer Hostess couldn't figure out how to manage their company without giving the CEOs 80 percent raises, cool. But here's what I'm really wondering: Who exactly has been buying all those Twinkies and keeping Hostess afloat all these years?

I don't think I know anybody who eats Twinkies--at least they don't admit it--and I'm not among the masses of Twinkie eaters, either. My only moment of Twinkie consumption happened when I was 8-years-old and it was purely the result of me being a little sister who wanted to get her 17-year-old brother in trouble.

You see, back in the 1970s and 1980s--waaaay before it became part of the mainstream--my mother was into reading labels, strongly against sugar and processed foods, and in favor of eating organic. There were no Oreos, no soda, no sugary cereals in our house. Everything was all natural--tofu, not Twinkies was on my mom's shopping list, and she was really strict about it. The upside of this was that I never had a cavity. The downside was that I'd go to my grandmother's house and try to drink an entire pitcher of grape Kool-Aid. It didn't taste that good, but forbidden fruits are always a bit sweeter, right?

Anyway, I popped the box open and decided to try one of the Twinkies. Eating one wouldn't damage my case against my brother. I figured 19 Twinkies was just as punishable an offense as 20. I carefully unwrapped the plastic casing and took a bite. It was all golden sponge cake and creamy goodness--sweet, but also light and airy--and so I ate another one...and then another...and another. Ahem, I ate every Twinkie in that box.

I slid the now empty box that had once held 20 Twinkies back under my brother's bed and went off to read a pilfered Richie Rich comic. After an hour or so, I had severe stomach cramps and I thought I might throw up, so I went to lie down. Later that day my mother remarked that I looked at bit green. I told her my stomach really hurt, but I couldn't divulge that it was due to my eating all those Twinkies.

That night my brother discovered that although his box of Twinkies was still under his bed, there was nothing inside. He was livid and came in my room to confront me. "I'm gonna go tell mom," he yelled at me in typical peevish teenager fashion. But I helpfully pointed out that although I'd eaten all his Twinkies, there was nothing he could do about it. He couldn't go tattle because he wasn't supposed to have them in the first place. The look on his face was SO priceless--if you have siblings, you know that look--and he vowed to exact his revenge. I dared him to sneak-buy another box of Twinkies since he was so tough.

After that I'd see Twinkies on grocery store shelves or in the lunch boxes of other kids at school and I'd be reminded of how ill they made me. By the time I was an adult, I'd figured out that all the stuff my mom was trying to tell us about junk food was absolutely right. Whichever company ends up buying Twinkies, I still won't be buying any. Twenty Twinkies in one sitting means I'm scarred for life.
Email Post
Labels: Childhood I know you think I'm crazy after reading this In the News junk food

Catcher in the Rye said…
What a classic childhood story! My mom was similar in her approach to raising my sister and I. No soda, and there weren't sugary cereals and sweets lining the cupboards either. It definitely impacted what I eat and crave as an adult!
8:07 AM, December 02, 2012