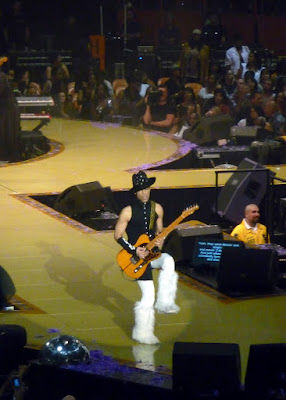 Lately, I've spent a lot of time with a couple of princes.

One got married yesterday in front of millions of people around the world, and I had a hard time staying awake during the ceremony.

The other, the artist we all know as Prince, put on an amazing show at the Forum in Inglewood on Thursday night, and when it was over I had to be shooed out of the building by security. At 12:40 a.m.

Anyone who skips Prince's 21-night Los Angeles concert residency is a fool. Most tickets are a mere $25, meaning you don't have to shell out a bunch of cash to see one of the greatest artists of the 21st century. Attending a Prince concert is like being at a musical religious service. It really is a powerful experience. And, no matter how rational you think you are, you may start putting your hands in the sky to testify. I lost track of how many times I cried during the concert. He really is THAT good.

A Prince concert is also always a surprise, and during this residency, every show has had a different, unannounced opening act--we got the amazing Cassandra Wilson--and a different set list. Yes, he's gonna play Purple Rain--the arrangement he did of it was perfection and the crowd was undeniably "with" him through the whole thing. But he's not phoning it in and simply playing all his big hits in the same order, with the same arrangement, night after night. On Thursday he surprised the crowd with rarely heard tracks like "17 Days" and "Partyman", and he pulled out covers of funky faves like "Play That Funky Music White Boy" and "Jungle Love".

His outfits are rock star crossed with funk, and as always, Prince isn't afraid to be different. At one point, he had on a glittery gold outfit with gold high heeled boots. LOVED it. During the third encore, he had this amazing white outfit with gigantic white furry boots--and the back of the boots had those lights on them like the Skechers shoes for kids. During the fourth encore, he threw a sleeveless black tunic over the white pants, put on some fingerless gloves that had P-R-I-N-C-E on them in gold thread, and a funky black hat with gold studs. And looked GOOD wearing it. Who else can pull that off?

The funniest part of the show was also during the third encore when he invited a bunch of audience members up on stage to dance. It got a little crowded so he got up to dance and sing on his piano. That's when these three 100 percent annoying girls started bugging him, trying to touch him and grab his behind. But, Prince didn't holler for security to drag them off the stage. Instead, he totally blew them off by poking fun at them, saying "Jersey Shore, everybody". And then when they still wouldn't leave him alone, he gently scolded their behavior, asking them, "Can't you see I'm trying to work?"

Just when I thought it couldn't get any better, the man closed the show with one of my top 10 favorite songs of all time, Roxy Music's "More Than This". I sobbed through the whole thing because it was so emotional and soulful. I actually tried to record it with my camera but I was so overcome, I guess I forgot to press record. Ah, well, at least everytime I listen to the original, now I'm gonna think of Prince singing it.


Then, after I was through crying, I ran into fellow Depeche Mode fan, Melissa: 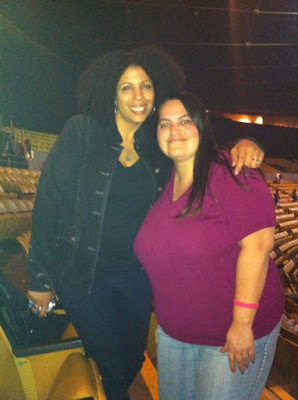 Also, can we talk about how good looking Prince still is? He's always been totally put-you-on-a-plate-and-sop-you-up-with-a-biscuit hot. But wow, at 52, I think he might be finer than ever. Sigh...If I'd had an XXL pair of granny pannies, I would've tossed them up on the stage. With this blog address written on them with a sharpie.

He obviously takes great care of himself. As you can see from the picture I took of him rocking in his furry boots, he's not all roided up, but he's not afraid to go sleeveless either. He doesn't have that plastic surgery look that so many aging celebs have. His face moves, so it's not botox, and no that level of hotness is NOT just artful application of pancake makeup. Can somebody find out his workout routine and skin care regimen?

Prince has at least 13 more shows left as part of the residency. I might need to go get my fix again before it's over. Hmm... Maybe I shouldn't have written this post because now all y'all here in L.A. are gonna want to go, and that will make it harder for me to get a ticket!
Email Post
Labels: Concerts Depeche Mode Los Angeles makeup prince purple rain Roxy Music workout

Jameil said…
:( He was here one night only, Charlotte, too and the cheap seats sold out almost immediately so we missed him. I hope he goes on tour again soon. Rashan's seen him 4xs and I haven't even been once!
10:07 PM, April 30, 2011