How Can I Be Down With Ben Franklin's Mindset? 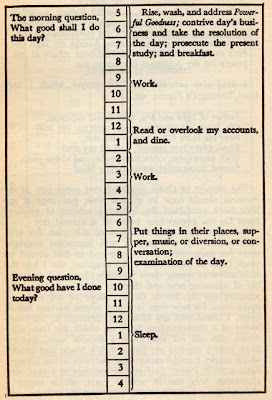 Sunday afternoon I became very ill. So ill that I didn't take my boys to school on Monday. I have no idea what they did all day because I slept most of the day, but I have a feeling they may have overindulged in video games, TV and junk food. Oops.

Sometimes Tuesday afternoon when my temperature was beginning to come down to around 100, I began poking around online to see what was happening in the world. Someone on Twitter was passing around the above copy of Benjamin Franklin's daily schedule (which my friend Nicky tells me comes from, Poor Richard's Almanack, one of the works he wrote under a pseudonym) and I got to thinking, would my life be better off if I had a schedule like his?

First of all, homie has a TWO HOUR lunch and reading break in the middle of the day! Franklin, er, "Poor Richard", isn't scarfing down his lunch at his desk while hunched over his laptop. He probably never even took a lunch to work that needed microwaving. (Nevermind that microwaves didn't exist then. Just roll with me, mmkay?)

Second, I love how 6 p.m. comes around and he's like, bam, time for "putting things in their places, supper, music, or diversion, or conversation; examination of the day." Gosh, I have a feeling his version of music wasn't listening to the radio while battling rush hour traffic. And I bet that the 18th century "diversion" is a whole lot different than mine. Maybe less stressful? Maybe less take-your-butt-to-the-gym-and-run and more reading poetry by candlelight? Clearly, I'm romanticizing things. I mean, the man had to use chamberpots! Part of putting things in their places might have been emptying those suckers...and...eww! I didn't need that visual.

Now that I'm finished being jealous of that lunch break and the amount of sleep he gets (but not the chamber pots), I realize I do have a few things in common with Franklin/Poor Richard.

Notice those framing questions? I love them but that's not a commonality we share. Sure, I keep it in my mind to do good in the world, but rarely do I specifically ask the question, "What good shall I do this day?" Right now it's merely a vague hope--I don't want to do harm to anybody...well, OK, sometimes..., but I don't consciously set out with the mindset that I'll do something good every single day either. There is a difference.

Funny how a little thing floating around the web can inspire such reflection. See, it really is all about the Benjamins, baby!*

sweatpantsmom said…
"Usually at the end of the day I'm listing off all the things I didn't finish, all the bad things I've done, all the ways I've fallen short. Rarely do I think about the good I've done."

nick said…
He may ask himself what good he's going to do, or has done, but as far as I can see from his schedule all he does is potter about "working", "overlooking his accounts" and "putting things in their places". Where is the good? Has he helped any old ladies across the road? Has he given a homeless person a bowl of soup? Is he even bringing up a couple of kids? I think he's a bit of a poser.
5:37 AM, April 07, 2011

There is the small bit called "work" that maybe...just maybe...involves other people. Within those interactions (or between them), BF may just be helping someone. Don't put good deeds in a box.
5:59 AM, April 07, 2011

heartinsanfrancisco said…
I've had periods in which I formed the deliberate intention to do good every day, but I am easily derailed by bad drivers, rudeness, or someone blowing cigar smoke on me. And I tend to lie awake at night pondering all the ways in which I fell short raising my children, despite the fact that they all turned out beautifully anyway. I wonder if all insomniacs are conscience-driven, or if there are other reasons that keep some of us from sleeping enough.

Sarah Auerswald said…
Um first of all, he's a man. So he doesn't have to do any of the caretaking we do.

Liz Dwyer said…
Sweatpantsmom,
Glad to share...and glad to know I'm not the only one who does that at the end of the day. (Clearly, another reason why we get along in real life.)

Nick,
lol! I do wonder what the details of his work are. I guess I'd have to read the book to find out. It's interesting, I actually don't know much about Ben Franklin beyond the surface details.

B.
True true. Maybe we unfairly think of him sitting around with a quill in his hand getting ready to write deep thoughts.

Heart,
That could be it. I certainly didn't sleep last night BUT I kinda took a lunch today. It was only 20 minutes but it was better than the usual. Thanks for the good wishes.